Cleric blames surge of rapes in India on pornography, loss of values 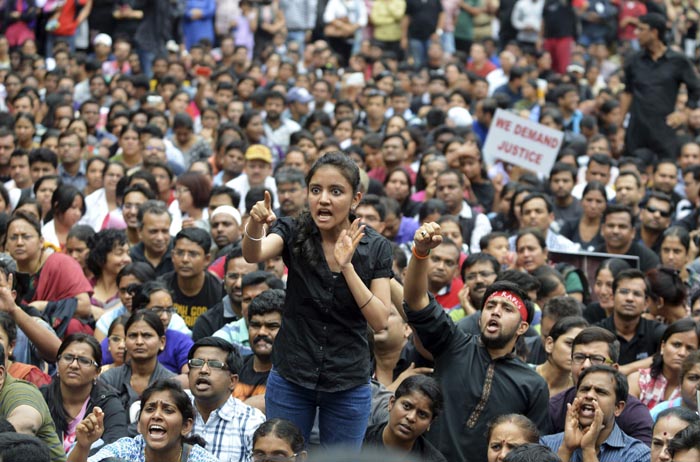 A demonstrator shouts slogans during a rape protest in Bangalore, India, July 19. A study by the New Delhi-based Commonwealth Human Rights Initiative discovered that two rapes have been reported every hour for the last 13 years, according to crime data collected by India's National Crime Records Bureau. (CNS photo/Stringer, Reuters)

NEW DELHI (CNS) — The decline of moral and spiritual values in Indian society is largely to blame for the surge in rape and sexual violence, said the secretary-general of the Indian bishops’ conference.

“The core values of the society are getting degenerated. Indiscriminate gratification of desires, induced by the media, lies at the root of the increasing number of rapes,” Archbishop Albert D’Souza of Agra told Catholic News Service.

“Young girls and even (religious) novices have become vulnerable to sexual predators,” he said, as Indian media buzzed about the latest reports on the rapid increase in the number of rapes in India.

A study by the New Delhi-based Commonwealth Human Rights Initiative discovered that two rapes have been reported every hour for the last 13 years, according to crime data collected by India’s National Crime Records Bureau.

The number of rapes registered by police had doubled from 16,075 cases in 2001 to 33,707 in 2013, the bureau reported. Social activists say many more cases go unreported because of stigmatization and intimidation by culprits.

“We are deeply disturbed to see that the incidents of rape and assault on women are continually on the increase with no sign of abatement despite a wave of public outcry, condemnation and demonstrations.” — Archbishop Bernard Moras of Bangalore, India.

“The easy access to pornography through Internet and the media play a big a role in the increase in the number of rapes,” Archbishop D’Souza said.

“What happened in (a) Bangalore convent shows the dangerous situation around us,” the archbishop said, referring to the gang rape of a 16-year-old novice July 16 in at Holy Nativity Convent in a suburb of the southern India city.

Sister Pushpa Jyothi, treasurer of Bangalore unit of Conference of Religious India and a member of the Salesian Missionaries of Mary Immaculate, said unidentified men rang the doorbell, “covered the face of the novice with chemicals when she opened the door,” then raped her.

Describing the assault as shocking, Archbishop Bernard Moras of Bangalore said July 18 that “even young girls who have dedicated their lives to God are not spared and are becoming the victims of such a heinous crime.”

“We are deeply disturbed to see that the incidents of rape and assault on women are continually on the increase with no sign of abatement despite a wave of public outcry, condemnation and demonstrations,” Archbishop Moras said.

News of the rape circulated the day irate parents and others stormed an elite public school following reports that a 6-year-old girl had been raped in the school by two staff members.

Police arrested four people, including two instructors and the school’s owner for failing to report the crime to the police.

Although more than 80 nuns attended a Conference of Religious India meeting in Bangalore July 20 at which the rape of the novice was discussed, the group decided against participating in a public protest because “worse things” were happening in the community.

Salesian Father Edward Thomas, a member of the Karnataka State Commission for Protection of Child Rights, urged women religious at the gathering “to ensure that no sexual abuse of children took place in the institutions under your care.”

“It is shocking that our commission is getting dozens of cases of child abuse. We need to be more alert and sensitive to what is happening around us,” said Father Thomas.

The priest’s comments echoed those of Archbishop D’Souza, who told CNS that the “duty and mandate” of church workers is to become advocates for an end to sexual crimes.

“When the legal system also fails to improve the situation, the moral conscience has to be awakened,” he said.

Holy Spirit Missionary Sister Helen Saldanha, secretary of the women’s office of Indian bishops’ conference, told CNS the church has “to be more active” in all spheres to combat sexual crimes.

“Gender awareness-building and sensitization based on the dignity of the human person should be part of all our apostolate. The church should also implement steps to guard against sexual harassment in all our institutions,” she said.

NEXT: Sign of peace at Mass: Vatican says it stays put, but urges education