Sign of peace at Mass: Vatican says it stays put, but urges education 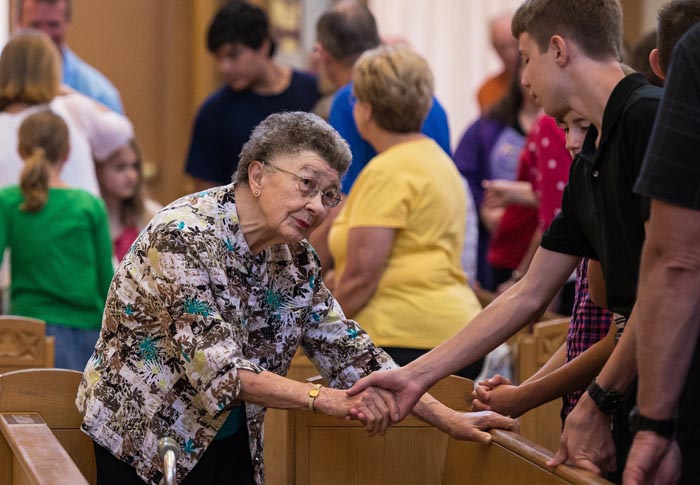 Eileen Schwingle shares the sign of peace with a young man during Mass in July at the cathedral in Green Bay, Wis. (CNS photo/Sam Lucero, The Compass)

VATICAN CITY (CNS) — The sign of peace at Mass has not always led to serenity among liturgists or within the congregations gathered each Sunday in Catholic churches around the world.

After nine years of study and consultation, the Congregation for Divine Worship and the Sacraments has told Latin-rite bishops around the world that the sign of peace will stay where it is in the Mass.

However, the congregation said, “if it is foreseen that it will not take place properly,” it can be omitted. But when it is used, it must be done with dignity and awareness that it is not a liturgical form of “good morning,” but a witness to the Christian belief that true peace is a gift of Christ’s death and resurrection.

The text of the congregation’s “circular letter” on “the ritual expression of the gift of peace at Mass,” was approved by Pope Francis and posted in Spanish on the website of the Spanish bishops’ conference. Jesuit Father Federico Lombardi, Vatican spokesman, confirmed its authenticity Aug. 1.

Catholic News Service obtained a copy of the letter in English. 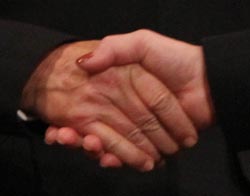 In 2005, members of the Synod of Bishops on the Eucharist adopted a formal proposition questioning whether the sign of peace might be better placed elsewhere in the Mass, for example at the end of the prayer of the faithful and before the offering of the gifts.

Cardinal Antonio Canizares Llovera, current prefect of the congregation, and Archbishop Arthur Roche, the congregation’s current secretary, said Pope Benedict XVI had asked the congregation to study the matter and, after doing so, in 2008 it asked bishops’ conferences around the world whether to keep the sign of peace where it is or move it to another moment “with a view to improving the understanding and carrying out of this gesture.”

“After further reflection,” the letter said, “it was considered appropriate to retain the rite of peace in its traditional place in the Roman liturgy and not to introduce structural changes in the Roman Missal.”

But that does not exclude the need for new or renewed efforts to explain the importance of the sign of peace so that the faithful understand it and participate in it correctly, the congregation’s letter said.

It asked bishops to study whether it might be time to find “more appropriate gestures” to replace a sign of peace using “familiar and profane gestures of greeting.”

And, it said, they should do everything possible to end “abuses” such as:

— “The introduction of a ‘song for peace,’ which is nonexistent in the Roman rite.”

— “The movement of the faithful from their places to exchange the sign of peace amongst themselves.”

— “The departure of the priest from the altar in order to give the sign of peace to some of the faithful.”

“Christ is our peace, the divine peace, announced by the prophets and by the angels, and which he brought to the world by means of his paschal mystery,” the letter said. “This peace of the risen Lord is invoked, preached and spread in the celebration (of Mass), even by means of a human gesture lifted up to the realm of the sacred.”

In some Catholic liturgical traditions, it said, the exchange of peace occurs before the offering in response to Jesus’ exhortation in Matthew 5:23-24: “If you bring your gift to the altar, and there recall that your brother has anything against you, leave your gift there at the altar, go first and be reconciled with your brother, and then come and offer your gift.”

But in the Latin rite, the letter said, the exchange of peace comes after the consecration because it refers to “the ‘paschal kiss’ of the risen Christ present on the altar.” It comes just before the breaking of the bread during which “the Lamb of God is implored to gives us his peace.”

PREVIOUS: Cleric blames surge of rapes in India on pornography, loss of values