Spend time in silence and service before Christmas, pope suggests 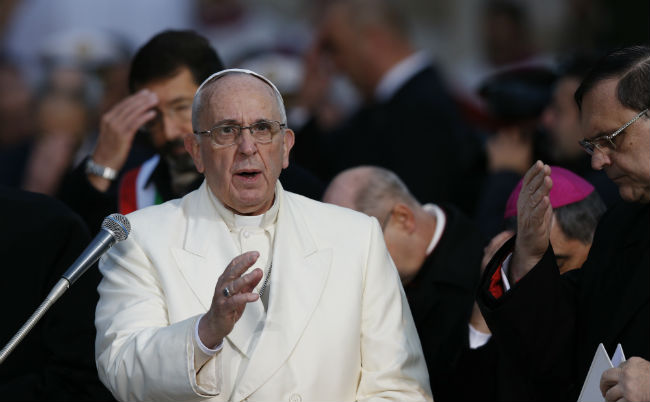 Pope Francis delivers his blessing while praying at a statue of Mary overlooking the Spanish Steps in Rome Dec. 8, the feast of the Immaculate Conception. (CNS photo/Paul Haring)

ROME (CNS) — In the heart of Rome’s high-end shopping district, sparkling with Christmas lights and shiny baubles in the windows of famous designers, Pope Francis prayed that people would spend time in silence and in service as they prepare to celebrate Jesus’ birth.

Celebrating the feast of the Immaculate Conception Dec. 8, Pope Francis prayed for Mary’s intercession so that, “in us, your children, grace also will prevail over pride, and we can become merciful like our heavenly Father is merciful.”

Before laying a basket of cream-colored roses at the foot of a statue of the Immaculate Conception near Rome’s Spanish Steps, Pope Francis recited a special prayer he composed for the occasion.

The feast is a major Rome holiday, and with brilliant blue skies replacing days of gray and rain, thousands of people lined the streets near the Spanish Steps to catch a glimpse of the pope and pray with him for Mary’s assistance.

Pope Francis said Mary being conceived without sin should give all Christians hope and strength “in the daily battle that we must conduct against the threats of evil,” because her immaculate conception is proof that evil does not have power over love.

“In this struggle we are not alone, we are not orphans,” he said, because Jesus gave his mother to be our mother.

“Today we invoke her maternal protection on us, our families, this city and the world,” the pope said, praying that God would “free humanity from every spiritual and material slavery.”

“In this time that leads up to the feast of Jesus’ birth, teach us how to go against the current,” Pope Francis prayed to Mary. Teach people how to be unencumbered, “to give ourselves, to listen, to be silent, to not focus on ourselves, but to leave space for the beauty of God, the source of true joy.”

In a small blue Ford Focus, the pope was driven to the Spanish Steps’ neighborhood after first stopping for a private prayer at the Basilica of St. Mary Major.

Earlier in the day, with thousands of people gathered in St. Peter’s Square, Pope Francis led the recitation of the Angelus, a Marian prayer.

Commenting on the feast day’s Gospel reading — Luke’s story of the annunciation to Mary that she would be Jesus’ mother — the pope said it was important that Mary did not respond, “I will do what you say,” but “May it be done unto me.”

“The attitude of Mary of Nazareth,” he said, “shows us that being comes before doing, and that we must let God do in order to be truly as he wants us to be. He will accomplish marvels in us.”

“We, too, are asked to listen to God, who speaks to us and accept his will,” the pope said. “According to Gospel logic, nothing is more effective and fruitful than listening and accepting the word of the Lord.”

The pope also said the Gospel story shows how Mary “is receptive, but not passive.” She agrees to God’s will, receives the power of the Holy Spirit and gives “flesh and blood” to the son of God.

And while Mary was conceived without sin — a special and unique privilege — “we, too, always have been ‘blessed,’ that is loved, and therefore ‘chosen before the foundation of the world, to be holy and without blemish before him,'” as the day’s reading from Ephesians said.

Recognizing how blessed they are, the pope said, Christians must be filled with gratitude and ready to share their blessings with others.

“If everything has been given to us, everything must be given again,” he said. “How? By letting the Holy Spirit make us a gift for others.”

NEXT: Pope calls for more ‘integration’ of divorced Catholics, gays