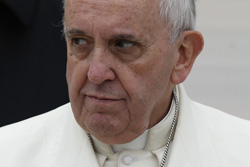 Pope Francis looks on during his general audience in St. Peter’s Square at the Vatican Dec. 3. (CNS photo/Paul Haring)

VATICAN CITY (CNS) — Pope Francis said that the Catholic Church must consider various ways to integrate the divorced and civilly remarried in the life of the church — not merely allowing them to receive Communion, but letting them serve as eucharistic ministers and godparents — and to make it easier for Catholic families to accept their homosexual members.

The pope also said he would travel to three Latin American countries and several African countries in 2015, and that major reforms of the Vatican bureaucracy, including the possible appointment of a married couple to head a new office, will not be ready before 2016.

Pope Francis made his remarks in an interview published Dec. 7 in the Argentine newspaper “La Nacion.” The interview, with journalist Elisabetta Pique, was conducted Dec. 4 in the pope’s suite at the Vatican guesthouse, where he lives.

The pope answered several questions about the October 2014 Synod of Bishops on the family, which considered a controversial proposal to allow some divorced and civilly remarried Catholics to receive Communion even without an annulment of their first, sacramental marriages. By church law, such Catholics may not receive Communion unless they abstain from sexual relations, living as “brother and sister” with their new partners.

Regarding such Catholics, “we posed the question, what do we do with them? What door can be opened for them?” Pope Francis said. “Communion alone is no solution. The solution is integration.”

The pope noted several currently prohibited activities, including teaching Sunday school and distributing Communion, that he said amounted to the de facto excommunication of divorced and civilly remarried Catholics.

“Let us open the doors a bit more. Why can’t they be godfathers and godmothers?” Pope Francis said, dismissing the objection that they would set a poor example for the baptized.

Divorced and civilly remarried godparents offer their godchild the “testimony of a man and a woman saying, ‘My dear, I made a mistake, I was wrong here, but I believe the Lord loves me, I want to follow God, I was not defeated by sin, I want to move on.’ Is anything more Christian than that?”

Such godparents are more worthy of their role than “political crooks” who happen to be properly wedded, the pope said.

“We must go back and change things a bit, in terms of standards,” he said.

Referring to the synod’s controversial midterm report, which used remarkably favorable language toward people with ways of life contrary to Catholic teaching, including those in same-sex unions, Pope Francis said, “nobody mentioned homosexual marriage at the synod, it did not cross our minds.”

“The synod addressed the family and homosexual persons in relation to their families,” the pope said. “We have to find a way to help that father or that mother stand by their (homosexual) son or daughter. That’s what the synod addressed. That’s why someone mentioned positive factors (of same-sex unions) in the first draft. But that was just a draft.”

Asked about his decision to dismiss U.S. Cardinal Raymond L. Burke from his post as the head of the Vatican’s highest court, the pope confirmed widely circulated reports that he had decided on the move prior to the synod; hence the cardinal’s positions at the synod, where he was a leading conservative voice, were not the reason for his reassignment to a largely honorary job with a chivalric religious order.

The pope cited unspecified “legal restructuring” in the Vatican as reason for Cardinal Burke’s reassignment, noting also that the Order of Malta needed a “smart American who would know how to get around.”

Pope Francis said his ongoing reform of the Vatican bureaucracy is a “slow process” that will not be ready before 2016. He said it was possible that a new office, the product of a merger of the current pontifical councils for the Laity, the Family and Justice and Peace, could be headed by a woman or even a married couple.

The pope also announced that he would travel in 2015 to “some African countries” and three Latin American countries, not including his native Argentina, which will have to wait until 2016.

NEXT: In Philippines, lessons from Haiyan helped lessen Hagupit’s impact