Willke, a Catholic doctor and longtime pro-life advocate, dies at 89 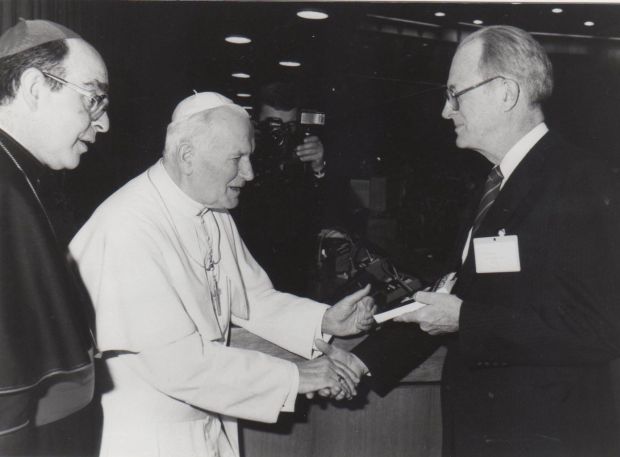 Dr. John "Jack" Willke, an obstetrician and a former president of the National Right to Life Committee who is credited with helping shape the pro-life movement, died Feb. 20 at his home in Cincinnati. He was 89 years old. He is pictured in an undated photo shaking hands with Pope John Paul II. (CNS photo/courtesy National Right to Life)

CINCINNATI (CNS) — Dr. John “Jack” Willke, an obstetrician and a former president of the National Right to Life Committee who is credited with helping shape the pro-life movement, died Feb. 20 at his home in Cincinnati. He was 89.

A funeral Mass was to be celebrated Feb. 26 at St. Clare Church in Cincinnati.

“There is no way to quantify the contributions Jack Willke, along with his wife, Barbara, made to the right-to-life movement,” said Carol Tobias, the current president of National Right to Life, as it is now called.

“Jack’s generous heart and wonderful sense of humor will be greatly missed. He and Barbara devoted their lives to the right-to-life movement, and we will be forever in their debt,” Tobias said in a statement.

He earned his medical degree from the University of Cincinnati in 1948 and was a family practitioner in Ohio for much of his medical career, from 1950 to 1988. He also was on the senior attending staff of Providence and Good Samaritan hospitals.

In the early 1970s, Willke and his late wife, Barbara, co-founded Right to Life of Greater Cincinnati.

By 1988, Willke had stopped practicing medicine so he could devote himself full time to the pro-life movement.

He and his wife co-wrote 12 books on human sexuality and abortion. They created audio and visual pro-life educational materials used throughout the world, and those materials have been translated into 30 languages on five continents.

The couple helped form the foundation of right-to-life educational efforts through the development of the “Willke slides,” on fetal development and abortion, and their first book, “The Handbook on Abortion,” which sold an estimated 1.5 million copies. Both were considered must-haves for local activists, according to National Right to Life.

“Every pro-lifer relied on the ‘Willke slides’ on fetal development that beautifully depicted the development of the unborn child as well as the brutal reality of abortion,” Tobias said.

In 1984, Willke helped found the International Right to Life Federation. He was president emeritus of the organization at the time of his death.

In 1991, when he stepped down as National Right to Life president, he formed a new national group, the Life Issues Institute, to “serve the educational needs of the pro-life movement,” he said, by presenting the scientific facts about fetal development and the consequences of abortion.

The Cincinnati-based organization was formed to target Americans who were undecided or unsure of their stance on abortion, what he called “mushy middle” of the abortion debate.

“It is the middle group of Americans which will ultimately determine the fate of the unborn and which must be educated on the abortion issue,” he said at the time.

The goal of the Life Issues Institute was to “bring the undecided or confused to a firm and committed pro-life position on abortion and give the pro-life movement a clear majority to effect the necessary social change.”

The Willkes spent 40 years traveling around the United States and to dozens of other countries speaking out on behalf of the unborn.

In the U.S., their presentations prompted the formation of some state and local right-to-life groups even before the Supreme Court in 1973 handed down its landmark decisions in Roe v. Wade and its companion case, Doe v. Bolton, which legalized abortion on demand.

Willke had a daily five-minute radio program that was carried on almost 400 radio stations for 18 years. His one-minute commentaries, called “Life Jewels,” could be heard in English and Spanish on more than 1,000 stations, including 50 stations in Australia, 30 in South Africa and many stations in Brazil.

A book he wrote with his wife chronicling their involvement in the pro-life cause, “Abortion and the Pro-Life Movement: An Inside View,” was released earlier this year.

“The right-to-life movement has lost one of its most influential activists,” Tobias said. “But we know that Dr. Willke’s legacy of education and activism will live on in the countless men and women who were inspired to join the fight for life because of his efforts.”

Willke’s wife, Barbara, died in 2013. The couple had been married close to 65 years. He is survived by three daughters and three sons, and their spouses, and 22 grandchildren and three great-grandchildren.

NEXT: Baby born after RU-486 reversal is ‘light of our life,’ says father