Baby born after RU-486 reversal is ‘light of our life,’ says father 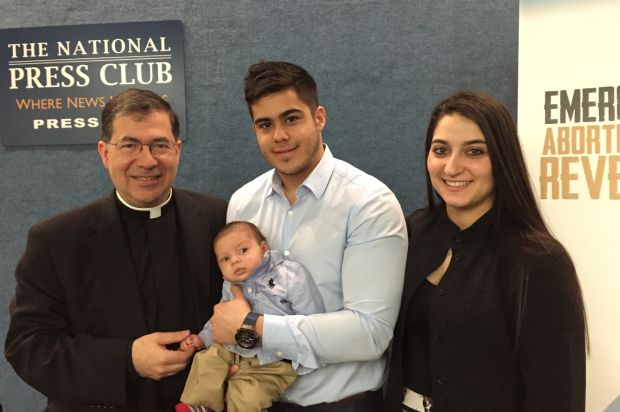 WASHINGTON (CNS) — Two-month-old Gabriel Caicedo is one of 78 children who have been saved by a new medical protocol being used to reverse the effects of the RU-486 abortion regimen in its early stages.

The baby is “the light of our life,” said his father, Chris Caicedo.

He and Gabriel’s mother, Andrea Minichini, told their story at a Feb. 23 news conference held by the American Association of Pro-Life Obstetricians and Gynecologists and Father Frank Pavone of Priests for Life to call attention to a RU-486 reversal kit available to physicians.

At the news conference, association officials and Father Pavone said the reversal kits work to counteract the “abortion pill” by increasing the levels of progesterone in the mother’s body.

The RU-486 protocol, approved by the Food and Drug Administration in 2000, involves three visits to a physician’s office over the course of two weeks and has been known to cause complications ranging from stomach pain and bleeding to death resulting from sepsis.

According to the FDA’s website, despite the risks associated with it, many women go through with the protocol but end up having a surgical abortion because of “medical abortion treatment failures.”

“It’s not a ‘quick and easy process,'” said Dr. Mary L. Davenport, a former president of the obstetrician association. Besides the 20 percent risk that a woman will have a serious complication such as blood loss, severe infection or ectopic pregnancy, “the woman also has the guilt of knowing that she terminated her pregnancy,” she told reporters.

Dr. Matthew Harrison, a family practice physician from North Carolina, was the first doctor to perform a medical abortion reversal, and he also addressed the news conference.

He recounted the case of a woman who came to him in 2007. According to Harrison, the woman had been to an abortion clinic where she was “bullied and pressured” into opting for a medical abortion.

The mother wanted to know if there was any way to stop the effects of the drug. At the clinic, he said, “they gave her no hope. They said, ‘There’s nothing you can do; you have to complete this procedure.'”

Harrison told the woman, “I need to step out and pray” about her request. “Then I said a prayer and started looking through books and thinking about how RU-486 works,” he told reporters. “It essentially just blocks the progesterone receptors and starves the baby.”

Harrison then immediately took some progesterone he had on hand for fertility treatments and, after informing the mother that the treatment might not work, injected her with the hormone.

She later gave birth to a little girl, who survived with “no problems and no ill effects” and, according to Harrison, is now “an excited little cheerleader for her local football team and just a great little joy to be around. She’s doing wonderfully.” Her mother went back to school and is now a respiratory technician and has purchased a house.

Since Harrison’s discovery, Davenport and Dr. George Delgado, medical director of the Culture of Life Family Services in San Diego, have published a series of case studies “demonstrating successful reversal of mifepristone effects in women who chose to reverse the medical abortion process.”

Delgado, who also is a member of the American Association of Pro-Life Obstetricians and Gynecologists, heads the Culture of Life’s reversal program.

In her comments at the news conference, Minichini, recounted her experience in a Planned Parenthood exam room last summer. Through tears of pain and uncertainty, she told the nurses that she wanted to have an abortion. After being informed of the rate of her unborn son’s heartbeat, she said, she couldn’t bring herself to swallow the large, white pill in her hand.

But she was repeatedly chided by the supervising doctor, she said, and so gave in and took the pill.

“I knew immediately after I swallowed the pill that I had made a bad decision,” Minichini said. “I even tried throwing up, but nothing happened.” At a hospital in New Jersey, she was told that her child would be deformed and disabled if she didn’t take the second pill in the RU-486 procedure.

“I was just at an end,” she said. “I didn’t have any hope, so I just started Googling,” before finding a hotline number that put her in touch with a physician who could reverse the medical abortion.

Gabriel David Caicedo was born Dec. 31, 2014, weighing 8 pounds 9 ounces and measuring 21 inches long. Despite what his mother was told back in May, Gabriel is an extremely healthy and energetic child.

“Take a deep breath and think about the situation. It’s a hard situation to go through, but it’s not as bad as many fathers think that it is. They (kids) are just a blessing to be quite honest. He gives us more ambition to progress (in life). … You just have to grab the bull by the horns,” said Chris Caicedo, adding, “Gabe is the light of our life, and this (pro-life) message is his purpose.”

Andrea, 22, is currently studying to be a physician’s assistant and Chris, 23, is studying accounting.

Stories such as Gabriel’s are important because they have the power to change minds about life and inspire hope in the face of abortion, according to Father Pavone. “The pro-life movement is about saving lives,” he stated, “and we save lives by taking despair and replacing it with hope.”

“There is not one person here who cannot save a life by spreading the news about this technique,” the priest told reporters, “the goal of the pro-life movement is to end all abortion, and for babies like Gabriel, who are here today because of this technique, abortion did end. It was conquered; it was overcome.”

The Culture of Life Family Services has a network of about 200 participating physicians around the country using the reversal procedure.

The American Association of Pro-Life Obstetricians and Gynecologists hopes that the reversal kits will eventually be available in emergency rooms and pregnancy crisis centers across the country to become more accessible to women who want to reverse the effects of RU-486.

NEXT: Four major snowstorms in week having an impact on Boston parishes