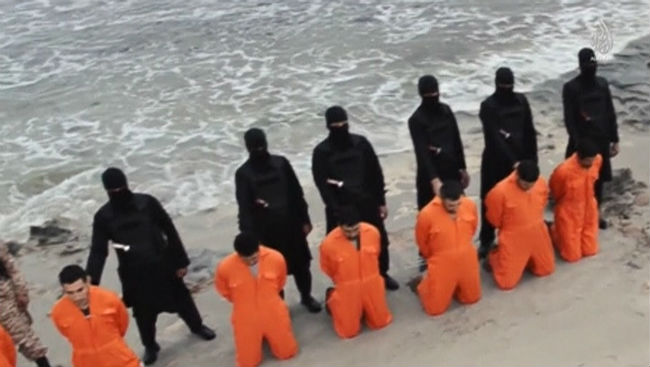 VATICAN CITY (CNS) — The 21 Coptic Christians who were beheaded by Islamic State militants died as martyrs, invoking the name of Jesus, said an Egyptian Catholic bishop.

In line with Pope Francis’ assertion at morning Mass Feb. 17, Bishop Antonios Aziz Mina of Giza told the Fides news agency that the “diabolical” video of the Christians’ massacre, intended to “spread terror,” was a testament to their martyrdom in the faith.

The video of their beheading, released Feb. 15, shows that “in the moment of their barbaric execution,” some of the Christians were repeating the words “Lord, Jesus Christ,” he said.

“The name of Jesus was the last word on their lips,” said Bishop Mina. And like the early church martyrs, “they entrusted themselves to the one who would receive them soon after. That name, whispered in the last moments, was like the seal of their martyrdom.”

Members of the Catholic community resolved to stay put, despite the killings and the emphatic calls from various authorities to evacuate the country.

Following the news of their assassination in Libya, Christians in the various dioceses of Egypt began praying and fasting, as the government called for seven days of national mourning. Several Egyptian bishops have spoken about constructing churches, dedicated to the 21 martyrs, in their dioceses.

Egyptian Prime Minister Ibrahim Mahlab announced President Abdel Fattah al-Sisi would arrange state funds for the construction of a church dedicated to the 21 martyrs in the Egyptian city of Minya, from which many of the victims hailed. In addition, by presidential decree, the victims’ families will receive financial compensation for the death of their loved ones (about $13,000), as well as a monthly stipend. The families are asking that the remains of their loved ones be returned to Egypt for burial.

Back in Libya, members of the Catholic community resolved to stay put, despite the killings and the emphatic calls from various authorities to evacuate the country.

“Few of us remain,” said Latin-rite Bishop Giovanni Martinelli of Tripoli, Libya. He told Fides, the news agency of the Congregation for the Evangelization of Peoples, Feb. 17 that many of those who remain are female Philippine nurses, who have decided to stay because of the dire medical needs in the city after the evacuation of the medical staff at the private St. James Hospital.

“It is for them that I remain,” the bishop said. “At this time, the situation is calm, but we do not know how things will evolve. Anyway, as I have said many times, so long as there is one Christian here, I will remain.”

NEXT: Pope seeks prayers for Egyptians beheaded by Islamic State