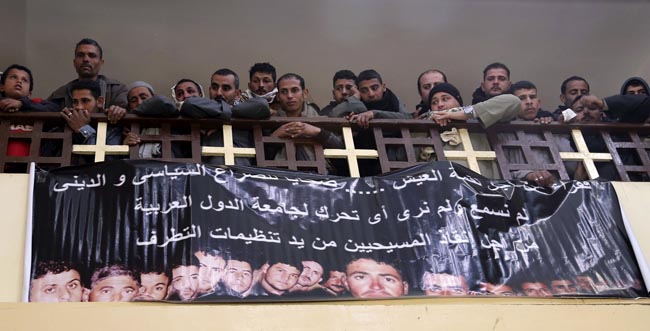 Neighbors and friends of the relatives of Egyptian men said to be killed in Libya attend Mass at a church south of Cairo Feb. 16 and pray in front of a banner with pictures of the victims. Egyptian jets bombed Islamic State targets in Libya Feb. 16, a day after the group there released a video showing what is said to be the beheading of 21 Egyptian Christians. (CNS photo/Asmaa Waguih, Reuters) 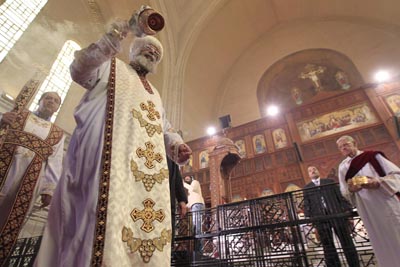 Pope Tawadros II of Alexandria, patriarch of the Coptic Orthodox Church, leads a Feb. 17 service at St. Mark Coptic Orthodox Cathedral in Cairo for the Egyptians said to have been beheaded in Libya. A video released on social media Feb. 15 is said to show the beheadings. (CNS photo/Mohamed Abd El Ghany, Reuters)

VATICAN CITY (CNS) — Pope Francis called for prayers for the Egyptian Christians beheaded by Islamic State militants in Libya and asked that God recognize these men killed for their faith.

He offered morning Mass Feb. 17 in the chapel of his residence for the slain Christians he termed “our 21 brother Copts” whose throats had been slit “for the sole reason of being Christians,” and he requested people pray for the victims so “that the Lord welcome them as martyrs.”

He called on people to pray as well for the victims’ families and for Egypt’s Orthodox leader, Pope Tawadros II, “who is suffering so much.” Pope Francis called Pope Tawadros Feb. 16 to express his sorrow over the deaths.

At the end of his weekly general audience Feb. 18, Pope Francis urged the international community “to find peaceful solutions to the difficult situation in Libya.”

And Cardinal Pietro Parolin, Vatican secretary of state, said, “the situation is serious and it demands a united response from the international community — a rapid response, the quickest possible from the U.N.”

Speaking to reporters on the sidelines of a bilateral summit with Italian government authorities Feb. 17, Cardinal Parolin said they talked about Libya and “the importance of re-launching a diplomatic initiative, and that any kind of armed intervention always be done according to the norms of international law and, therefore, that it be a U.N. initiative.”

Egypt, meanwhile, continued to mourn its 21 nationals, who had been working in Libya when the extremist group kidnapped them. Their beheading was depicted in gruesome detail in a video released Feb. 15 on a pro-Islamic State website.

The same evening in a nationally televised speech, Egyptian President Abdel Fattah al-Sisi called on his country’s government to provide full support to the families of the victims and vowed that Egypt maintained the right to retaliate.

In a statement issued Feb. 16 by the Coptic Catholic Church, Patriarch Ibrahim Isaac Sedrak of Alexandria, Egypt, extended his church’s “deepest sympathies” to the families and relatives of the murdered Christians.

In apparent reference to the retaliatory military action his country has since taken, Patriarch Sedrak also extended his church’s “deepest gratitude” to al-Sisi and “our country’s loyal armed forces, especially the air forces, for the rapid response.”

“Egyptian blood is valuable and honorable,” he said.

Speaking after the video of the beheadings surfaced — but before the strikes against Islamic State in Libya were announced — Pope Tawadros offered his church’s condolences to the relatives of the slain Christian migrant workers, most of whom local media reported had been from the same impoverished village in Egypt’s South.

“We trust that the role of all institutions of our state was clear since the beginning of the crisis in Libya, and we believe that they can ensure rights of Egyptian citizens,” the Egyptian portal Ahram Online quoted Pope Tawadros as saying.

Condemnation for the beheading of the Egyptian Christians in Libya quickly grew beyond Egypt as regional leaders, Muslim and Christian alike, learned of the massacre.

Jordan’s King Abdullah II, whose country is also fighting Islamic State militants in neighboring Iraq and Syria, called the beheadings of the Egyptian Christians a “heinous crime” committed “at the hands of the terrorist gang … hostile to all human values.”

Jordan’s Information Minister Mohammed al-Momani accused the Islamic State of “inciting blind hatred” with the killings, while Father Rifat Bader of the Catholic Center for Studies and Media in Amman called the beheadings a “crime not only against Arab Christians, but a crime against humanity.”

The Coptic Orthodox Patriarchate in Amman scheduled prayers of remembrance Feb. 18, and the heads and representatives of all church denominations in Jordan were expected to attend the service.

“It is unbelievable that this is happening in the 21st century,” said Bishop Shomali. “There is too much brutality. But what gives us comfort as Christians is the strong Muslim reaction against (the beheadings.) We do not feel alone, and Christians are united with all moderate Muslims, who are the majority.”

He said Christians and moderate Muslims in Israel and the Palestinian territories are less fearful of an Islamic State infiltration or attack than those in Jordan, since Jordan is surrounded by countries with a strong Islamic State presence and has joined the Western coalition fighting ISIS forces the militants.

Contributing to this story were Dale Gavlak in Amman, James Martone in Washington and Judith Sudilovsky in Jerusalem.