Advocates on either side of marriage case make presence felt 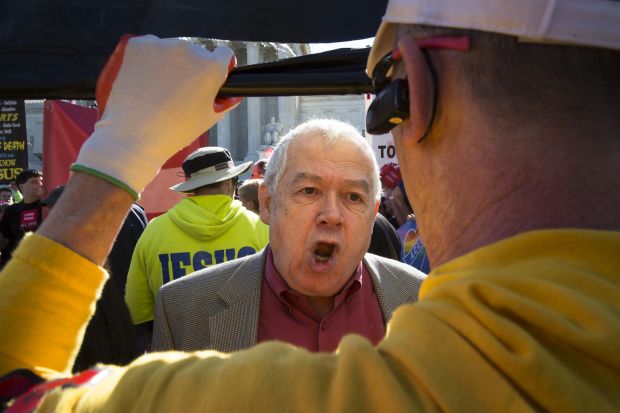 WASHINGTON (CNS) — Outside the U.S. Supreme Court building April 28 for arguments on several same-sex marriage cases, hundreds of advocates on either side of the issue milled about, looking for a place to stake a claim for their viewpoint in the public square.

As oral arguments were starting inside, a group of religious leaders representing multiple faith traditions took part in a procession to the Supreme Court to support same-sex marriage. On April 26, leaders of nearly 20 religious affiliations had publicly declared their communities’ support for marriage equality.

The procession started at the Church of the Reformation, an Evangelical Lutheran Church of America congregation on Capitol Hill. Its pastor, the Rev. Michael Wilker, said the congregation intentionally had been “out of compliance” with denominational practice until the ELCA permitted the ordination of gay clergy in committed relationships in 2009.

Rev. Wilker said he had officiated at same-sex marriages before the ELCA changed its position. “The church always came after the gay and lesbian pastors,” he said. “They never came after the straight pastors” such as himself.

In line waiting for a glimpse of the high court’s proceedings was another Lutheran cleric, the Rev. Dennis Di Mauro, pastor of Trinity Lutheran Church in Warrenton, Virginia, outside Washington.

Trinity is a member of the North American Lutheran Church, which split from the ELCA three years ago “on this issue,” Rev. Di Mauro said. In order to secede from the larger church, a congregation must conduct two votes, gaining a two-thirds majority each time, he added. Or, in Trinity’s case, “the losing group splits off and forms their own mission church,” he noted.

Rev. Di Mauro was not hopeful of the court case’s outcome. Asked if he thought the Supreme Court would give constitutional protection to same-sex marriage, he replied, “I think so. I hope not. (Justice Anthony M.) Kennedy has obviously made up his mind. He’s the flip vote.”

Phil Attey of Jensen Beach, Florida, who is gay, held aloft a “Catholics for Equality” sign. He said he has been active on the issue ever since I decided not to enter the seminary.

Attey said he has found his life as a gay Catholic to be “incredibly supported by my family and my parish community. It’s unfortunate that the male hierarchy hasn’t evolved on this issue, but that will change eventually,” he added, saying he welcomed “Pope Francis’ welcoming statements on the issue.”

One man holding a microphone said, “Maybe someone should stop the court proceeding,” adding Justices Elena Kagan and Ruth Bader Ginsburg had already conducted same-sex wedding ceremonies. He added doing so should disqualify them from hearing the case.

At a midmorning rally sponsored by Concerned Women for America, speakers confirmed the view of marriage as being between one man and one woman. Some added, that, given the diversity of views on the issue, the high court should allow states to decide for themselves whether to permit same-sex marriage.

One speaker, Rep. Bill Flores, R-Texas, condemned judicial intervention in the issue. Of the 37 states that currently allow same-sex marriage, in only two was it “voted in by their own people,” he said.

Brian Brown, president of the National Organization for Marriage, which supports traditional marriage, said at the rally the bad news is that “the days of comfortable Christianity are over,” but that it was also good news.

NEXT: High court considers place of same-sex marriage in states that bar it