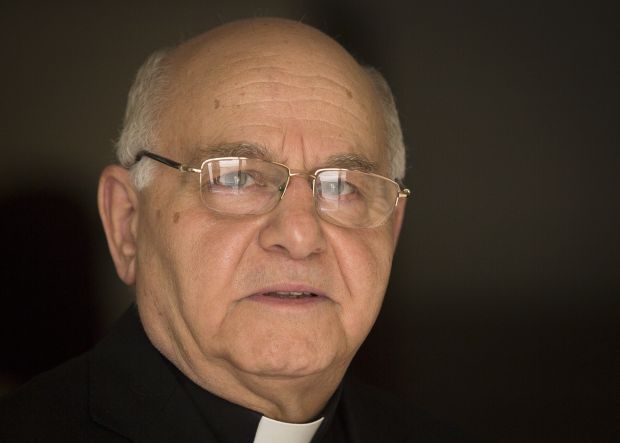 Melkite Archbishop Jean-Clement Jeanbart of Aleppo, Syria, poses for a photo in Washington April 30. The archbishop is in the United States raising funds for embattled Christians in Syria. (CNS photo/Tyler Orsburn)

He said people come to him for counsel on whether they should stay or leave in the middle of a protracted civil war among the regime of Syrian President Bashar Assad, fighters from Islamic State, and a clutch of rebel groups of various leanings.

“This has been our land for 2,000 years,” Archbishop Jeanbart said during an April 30 interview with Catholic News Service. Moreover, he added, Christians have lived peaceably with their Muslim neighbors, “although not as much now as before.”

Archbishop Jeanbart was in Washington as part of a brief U.S. visit to raise awareness of the plight of Syrian Christians and to raise funds for their relief. His Washington stop was to include interviews with CNN and ABC as well as a meeting with Rep. Christopher Smith, R-New Jersey, who has long been active in international human rights issues.

Getting to the United States can itself be an adventure. With the Aleppo airport closed, it’s a drive of nearly eight hours to Beirut, plus a four-hour flight to a European stopover en route to a seven- or eight-hour trans-Atlantic flight to the United States. “It becomes a 24-hour trip,” he said.

Syrians do not have that much mobility.

Aid to the Church in Need, the international Catholic charity that sponsored Archbishop Jeanbart’s U.S. visit, has committed $2.8 million in emergency aid for Syria’s Christians. About 40,000 of them have fled Aleppo, according to the archbishop. They tend not to go to refugee camps but instead to cities that are “less exposed, more quiet,” or seek out family in nearby countries, he said. Failing that, they head to European nations such as Germany and Sweden.

“I feel that once they go so far, they will never come back,” he said.

Archbishop Jeanbart is pushing his “Build to Stay” initiative, which seeks contributions to help Syrian Christians rebuild their lives and livelihoods.

In the Washington neighborhood where Archbishop Jeanbart was interviewed, it might be possible to buy a small apartment for $500,000. With that kind of money in Syria, he said, “you could provide homes for 100 families.”

Build to Stay was conceived earlier this year, during a period of “quiet” in the war.

“Just saying, ‘Don’t go, stay,’ is banal” unless there is something worth making Christians stay, he said.

He also said an Aleppo archdiocesan official contacted him days before the CNS interview to tell him that a 500-year-old Armenian church only 200 yards from the Melkite cathedral had been destroyed by bombs. Archbishop Jeanbart wondered aloud whether it was an intentional response to the recent 100th anniversary commemoration of the Armenian genocide at the hands of the Ottoman Turks; he believes Turkey lets arms flow freely across its borders to Islamic State.

His Melkite church and his residence have been hit twice with bombs during the war.

More arms are needed to stop Islamic State, he said, adding Pope Francis has declared it “legitimate” for Christians to bear arms to protect themselves from attacks. But Archbishop Jeanbart decried the ready availability of weapons, including arms stockpiled by Libya during the rule of Moammar Gadhafi, but now used by militant groups throughout the region.

Peace will come only when “everybody is tired” of fighting and ready for dialogue,” he said.

Archbishop Jeanbart asked for the intercession of St. Paul — although he said it was not part of the Melkite custom to ask for his help — to bring an end to four years of civil strife. St. Paul was on the road to Damascus, the present-day Syrian capital, to persecute more Christians when he had his conversion experience.

PREVIOUS: Bishop in Nepal: Time is running out for victims of earthquake

NEXT: Catholics must be active in politics, no matter how ‘dirty,’ pope says