Greenbacks and the green economy: Ecology is good business 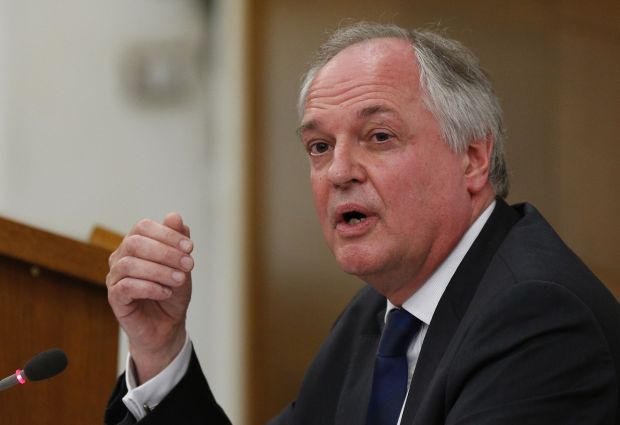 Paul Polman, CEO of Unilever, speaks at a conference on climate change at the Pontifical University of the Holy Cross in Rome May 20. Polman, whose company owns brands such as Lipton and Ben & Jerry's, said consumers want products that are environmentally friendly. (CNS photo/Paul Haring)

VATICAN CITY (CNS) — Consumers want products that are environmentally friendly, and businesses that are not on board are already starting to feel the pinch, said the CEO of the multinational Unilever.

Paul Polman, CEO of the company that owns brands like Lipton, Ben & Jerry’s and Suave, told a Vatican-sponsored conference that “the cost of inaction (on climate change) is starting to exceed the cost of action.”

As a small example, he said, people in communities facing regular power outages cannot keep his products in their freezers, and severe water shortages mean they don’t take showers as often, so shampoo sales decline.

Prince Jaime de Bourbon de Parme, the Dutch ambassador to the Holy See and co-sponsor of the conference May 20, described the meeting of business leaders, politicians and ambassadors as the last Vatican-sponsored conference on climate change before the release of Pope Francis’ encyclical on the environment.

Although the encyclical has not been published yet, it has triggered pre-emptive criticism, much of it depicting the presumed text as the work of a naive pope who accepts the trendy notion that human activity is responsible for climate change. What is more, some of the criticism expresses fear that the encyclical’s conclusions and call for action will be built upon his supposedly socialist leanings — especially his distrust of the free-market economy.

In reality, when discussing capitalism, Pope Francis has condemned attitudes of greed and idolatry that seem to insist economic activity is somehow free from any moral or ethical obligations. And while he has said he has met many communists who are good people, he adds a firm conviction that the communist ideology “is wrong.”

Like every pope since Pope Leo XIII, who initiated modern Catholic social teaching with his 1891 encyclical “Rerum Novarum,” Pope Francis insists that economic decisions are human decisions and, therefore, are not morally neutral. He also insists that the center of Catholic social teaching — respect for human dignity and promotion of the common good — are values at stake when making economic decisions.

The connection between economics and the environment are clear. Cleaning up pollution and reducing carbon emissions are costly; so, too, is changing the way land is farmed, forests are managed and minerals are obtained.

Yet speakers at the “new climate economy” conference insisted the costs of not acting are higher — morally, financially and politically.

Cardinal Pietro Parolin, Vatican secretary of state, sent a message to conference participants that began by quoting retired Pope Benedict XVI — not Pope Francis — about how “the earth’s state of ecological health” requires a re-evaluation of shortsighted economic policies and theories.

“When the future of the planet is at stake,” Cardinal Parolin wrote, “there are no political frontiers, barriers or walls behind which we can hide to protect ourselves from the effects of environmental and social degradation. There is no room for the globalization of indifference, the economy of exclusion or the throwaway culture so often denounced by Pope Francis.”

Former Mexican President Felipe Calderon, chairman of the Global Commission on the Economy and Climate, told the conference that the main obstacle to taking serious action on climate change has been the idea that “we need to choose either (economic) growth or mitigating climate change.”

However, a host of scientific and economic analyses have proven that notion wrong, Calderon said, echoing the conclusion of an earlier Vatican conference on climate change and sustainable development. Ban Ki-moon, secretary-general of the United Nations, headlined that conference in April.

Calderon said governments must give a clear signal at the U.N. Climate Change Conference in Paris at the end of the year that they are serious about reducing carbon emissions and promoting investments in the green economy.

“Innovation is the secret to economic growth,” he said, and “people with money are sitting on a bench,” not investing yet, but waiting to see if governments will support new, clean technologies.

Besides being an ethical issue, he said, “climate action is in our own economic interest; we can reduce poverty, increase employment and, at the same time, bring down the emissions responsible for global warming.”

Jeremy Oppenheim, a director at McKinsey & Co., a global management consulting firm, said growth obviously is important for companies and for countries, but “not all growth is equal.”

Cardinal Donald W. Wuerl of Washington told the conference that everything Pope Francis has said about ecology is “in total harmony with the teaching of his predecessors,” offering moral and ethical principles flowing from respect for human dignity and for the common good.

“If we are going to see a flourishing of the environment,” the cardinal said, “it is only going be through human ingenuity.”

“Protecting the environment need not compromise legitimate economic progress,” he said. The church does not condemn profit, but it does insist that “businesses must serve the common good.”

NEXT: Police follow Jesus in seeking to serve others, says pope