Police follow Jesus in seeking to serve others, says pope 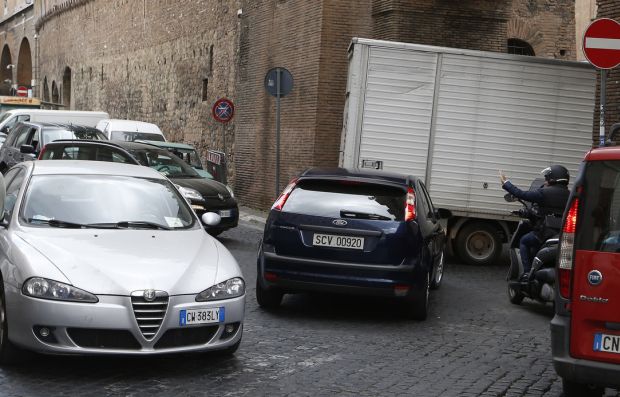 Pope Francis is caught in traffic in his blue Ford Focus as he leaves after visiting the offices of Vatican congregations for education, clergy and religious May 22. The pope's car is preparing to pass under an arch of the Vatican wall known as the "passato," which Pope Clement VII used to flee to nearby Castel Sant'Angelo when Rome was being sacked in 1527. (CNS photo/Paul Haring)

VATICAN CITY (CNS) — Police officers follow Jesus’ path in serving and defending others, rather than seeking to be served, said Pope Francis.

The pope met May 21 with members of the Italian state police and with the family members of officers who died in service.

The police profession is an “authentic mission,” which puts into practice the values of duty, discipline and sacrifice — even of one’s life — to defend public order and democracy, which are in contrast with organized crime and terrorism, he said.

“The community is indebted to you for the possibility of living an orderly life, free of the arrogance of violent and corrupt people,” he said.

Reflecting on police work from the perspective of faith, the pope said, “whoever serves the community with courage and self-sacrifice encounters, along with the difficulties and the risks connected to one’s role, a high level of self-fulfillment because he or she walks on the same road as our Lord, who wanted to serve and not to be served.”

In seeking to serve others, a person “fulfills his or her life, even in the eventuality that he or she may lose it, as Jesus did by dying on the cross,” he said.

The witness of Christian values is “all the more eloquent in these times,” when people are often unable to channel their sense of generosity toward a commitment that is “coherent and stable,” the pope said.

Police work is a commitment to something that has been “solid through time” — guaranteeing citizens order and lawfulness so that they can enjoy all other goods, he said.

The pope also recognized the work of the Italian police “on the front lines” in assisting the hundreds of migrants who land on Italy’s shores, distinguishing themselves by their “spirit of service and humanity” and motivated by the “moral imperative to do good” rather than simply to fulfill a legal duty.

PREVIOUS: Greenbacks and the green economy: Ecology is good business

NEXT: Archbishop Romero was motivated by Gospel, not politics, cardinal says