Historic number of Catholics to seek U.S. presidency in 2016 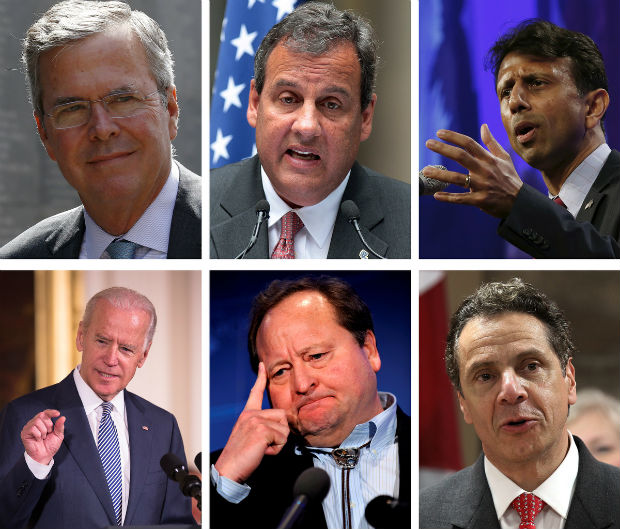 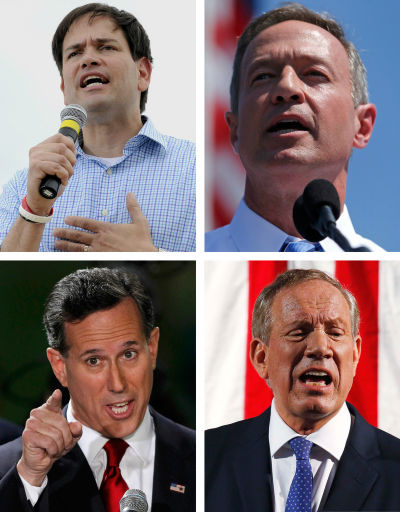 WASHINGTON (CNS) — The onetime stigma of being a Catholic for those seeking national office appears to have disappeared in the 2016 presidential election cycle since a record number of candidates have declared their candidacy or expressed an interest in running for the highest office in the country.

Twelve Catholics have said they are interested in running, four of whom have already declared their candidacy. Three others are clearly making moves that indicate they will announce a bid soon.

“It’s going to be a Catholic year for candidates running for the presidency,” said Stephen F. Schneck, director of the Institute for Policy Research & Catholic Studies at The Catholic University of America in Washington. “So, it’s historic.”

Bush declared his candidacy June 15. Christie and Jindal, who have both said they will announce their intentions later this year, are making the necessary campaign trips to Iowa and New Hampshire to be competitive in the early caucuses and primaries. 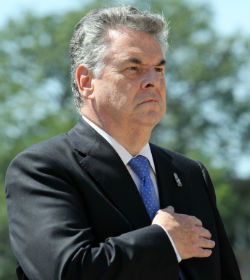 New York Republican Rep. Pete King, pictured in a 2010 photo, is one of eight Catholics who have expressed an interest in running for the U.S. presidency. (CNS photo/Gregory A. Shemitz)

A Biden candidacy seems unlikely at this point, but he hasn’t ruled it out. Cuomo had been touted as a formidable contender for the Democratic primary before recent troubles in his administration made a bid more difficult.

Though Schweitzer and the two Kings have not ruled out a run, it appears unlikely they will launch a campaign.

“There’s never been a (U.S. presidential) election with this many Catholics running as this year,” Schneck told Catholic News Service in an interview. “Historically, there’s been a gradual increase in the number of Catholic candidates for the office, but 2016 is going to be a Catholic year.”

The political landscape has drastically changed since the U.S. Constitution was ratified 228 years ago and Catholics have assimilated in all aspects of American society.

There was a time in the U.S. when a Catholic candidate for national office had a slim to no chance of winning the election based on his or her religion.

Catholics began to migrate to the U.S. in significant numbers in the middle of the 19th century and were a sizable portion of the population by the turn of the 20th century.

Given the population shifts, one would have expected more Catholic candidates for national office earlier on, but Catholics in the U.S. experienced substantial discrimination, diminishing the opportunity to seek the presidency.

“What we started to see, beginning in the late 19th and early 20th centuries, are Catholic enclaves beginning to elect Catholics locally,” Schneck said. “So places like Boston and New York and so forth, where there were large Catholic populations concentrated, we started to see Catholic politicians gradually begin to move into the mainstream.”

The first U.S. Catholic presidential candidate was Democratic New York Gov. Al Smith in 1928, and from historical perspective, the country was poised to elect a Democrat following eight years of Republican administrations.

“By all accounts, Smith lost because he was a Catholic,” Schneck said. “Smith was unable in a sense to cross denominational lines with political appeal. That continued up until the ’60s and John Kennedy experienced tremendous backlash against his Catholic faith in the 1960 campaign.”

President John F. Kennedy was the first Catholic to be elected. No other Catholic has won the presidency since.

“Kennedy in a sense also broke through, and so after Kennedy, somehow the drag of being Catholic that used to be on national candidates was no longer there,” Schneck said. “After Kennedy, a slew of Catholic candidates for the national stage started to step up.”

The progression of that cultural integration is evident in this election cycle, said David E. Campbell, director of the Rooney Center for the Study of American Democracy at the University of Notre Dame in South Bend, Indiana.

“Historically, perhaps a better question is to ask why there are so many Catholics running for the Republican nomination,” Campbell told CNS. “It was not all that long ago that Catholics were a Democratic monolith — at the same time that they were also what social scientists would call a religious ‘out group.’

“As a besieged minority, Catholics were more likely to vote as a bloc, and that bloc was Democratic,” he said. “Today, Catholics are no longer an out group, but instead squarely within the American mainstream.”

Accordingly, Catholic citizens no longer vote as a coalition and can be found strongly in both parties, Campbell said.

“There is no longer any penalty for being Catholic like J.F.K. or Al Smith may have faced. But there is also no Catholic benefit,” said Mark M. Gray, director of Catholic Polls at the Center for Applied Research in the Apostolate at Georgetown University. “Catholics don’t vote for Catholic candidates any more than other candidates.”

Catholic social teaching may have induced the dissolution of the stronghold the Democrats once had with Catholic voters and politicians, Gray told CNS.

“There are some teachings of the church that align with either party platform,” he said. “The church fits in neither party, therefore it is easy to be a Catholic Democrat or Catholic Republican.”

A call to service in Catholic social teaching also may have inspired such a large field of Catholic presidential candidates in this election cycle, Schneck said.

Since more than half of the 12 potential Catholic presidential candidates attended a Catholic high school, Catholic college or both, it’s likely that Catholic value was instilled during the educational process, he said.

PREVIOUS: Care for the poor must be top concern for bishops, some say