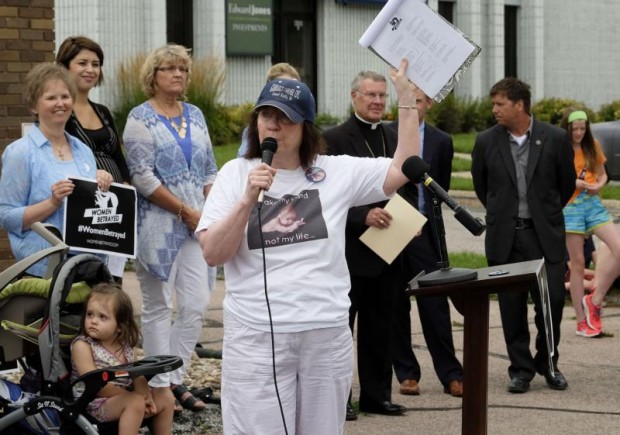 Carol Remer of Battle Creek, Iowa, leads a chant during a "Women Betrayed" rally in Sioux City July 28. Demonstrations were held in 65 cities across the country calling for an end to federal funding of Planned Parenthood. (CNS photo/Jerry L. Mennenga, The Catholic Globe)

OXNARD, Calif. (CNS) — It is uncertain that a California pro-life group’s ongoing series of undercover videos that show Planned Parenthood officials discussing the illegal marketing and sale of fetal tissue will lead to defunding for the nation’s leading provider of abortion services.

It also is unknown if the revelations in the videos will lead to charges or possible legal action against the pro-life group, the Center for Medical Progress, based on an investigation announced in late July by California’s attorney general.

But the videos definitely have brought to society a renewed and more graphic awareness of what fetal tissue and abortion represent. To Catholics, the recordings bring a renewed awareness of Catholic teaching on life issues, and a renewed call to defend life in what some call an increasingly “utilitarian” society.

(See a related story on the ethical issues under discussion.)

“Fetal tissue has been in the public discussion since the 1970s,” said Roberto Dell’Oro, director of the Bioethics Institute and professor of theological studies at Loyola Marymount University in Los Angeles. “What we see in these videos is a representation of how our society trivializes human life, by reducing it to a discussion of the acquisition of body parts and organs — a ‘commodification or commercialization’ of life.”

Vicki Evans, coordinator the San Francisco Archdiocese’s Respect Life Program, said that abortion supporters have reinforced the position that “embryonic stem-cell research is worth it if it leads to a cure for Parkinson’s or some other disease.”

“But this time, with the release of the CMP videos, the subject matter is so shocking and offensive — the selling and putting a price tag on parts of a human being, fetal tissue, arms and legs and organs and so on — that it cannot be rationalized away,” she told Catholic News Service.

For Catholics, the videos reflect the need to be mindful of what St. John Paul II called “the culture of death” in his 1995 encyclical “Evangelium Vitae” (“The Gospel of Life”).

“There are medical practices, like the harvesting of fetal tissue, that express the culture of death,” Dell’Oro said. “And you can’t help but recoil at the cavalier attitude of these Planned Parenthood doctors as they discuss the ‘intervention’ on a fetus and the prices of body organs while sipping wine and eating salad. That is beyond gruesome.”

Dell’Oro suggested that Catholics acquaint themselves with two “instructional” documents from the Congregation for the Doctrine of Faith — “Donum Vitae” (“The Gift of Life”) and “Dignitas Personae” (“The Dignity of a Person”) — which address new technologies associated with life issues, including the acquisition and utilization of “biological material” (such as embryonic stem cells and fetal tissue) that is of “illicit” origin.

“Donum Vitae,” for example, asserts that “science and technology … must be at the service of the human person, of his inalienable rights and his true and integral good according to the design and will of God. … Science without conscience can only lead to man’s ruin.”

“Dignitas Personae” is equally adamant: “The use of human embryos or fetuses as an object of experimentation constitutes a crime against their dignity as human beings who have a right to the same respect owed to a child once born, just as to every person. These forms of experimentation always constitute a grave moral disorder.”

Thus, when researchers and laboratories who acquire and utilize material gleaned from aborted babies say they are seeking to find treatments for diseases like Parkinson’s and Alzheimer’s, their motivation does not excuse their actions.

“Researchers’ utilization of this material, regardless of its purpose, is not independent of the act of abortion from which the material is derived,” Dell’Oro said. “And the more you keep open the need for such material, the more you entice the committal of actions — like abortion — that are evil and opposed to life.”

Evans, who partnered with the National Catholic Bioethics Center in a 2010 investigative article on Planned Parenthood, lamented the “utilitarian society we live in, where people like to make use of everything — you know, don’t throw it away. And organizations like Planned Parenthood say, ‘Well, why not use this aborted tissue to try and find cures for dreadful diseases?’

“But Catholic teaching says that each person has dignity, whether born or unborn; each is a creation of God,” she said. “And therefore, you can’t desecrate it, even if there is a supposed greater good that could potentially benefit others. And you certainly can’t merchandise it for profit, which is what these videos suggest Planned Parenthood doctors are doing.”

The National Institutes of Health Revitalization Act of 1993 notes that while “research on the transplantation of human fetal tissue for therapeutic purposes,” including that obtained from “spontaneous or induced” abortions, is legal, the sale of such tissue is illegal.

“It shall be unlawful for any person to knowingly acquire, receive or otherwise transfer any human fetal tissue for valuable consideration if the transfer affects interstate commerce,” the law states.

The law also states that “the term ‘valuable consideration’ does not include reasonable payments associated with the transportation, implantation, processing, preservation, quality control or storage of human fetal tissue.”

The gray area of what constitutes “reasonable payment” has contributed to the uproar over the comments made by Planned Parenthood doctors in the videos, and has suggested to some that more definitive guidelines are needed.

“I don’t think the act itself needs to be changed,” Evans said. “However, clear guidelines should be established to define the terms of the law and set limits. Abortion facilities and fetal procurement agencies cannot be on the ‘honor system,’ nor should they be trusted to self-police, particularly when their profits are at stake.”

Enforcement of the act’s provisions is a problem, Evans added, because “no government or enforcement agency is charged with overseeing the system.”

— A third undercover video alleging financial improprieties by Planned Parenthood officials was released July 28, in which a phlebotomist describes her shock at how fetal tissue was acquired and utilized at the Denver clinic where she worked. She no longer works at the clinic.

— Senate Republicans have called for a vote aimed at defunding Planned Parenthood, which receives more than $500 million annually in federal money. Although Republicans control the Senate, it is uncertain whether they can muster the 60 votes required to pass such legislation. Supporters of Planned Parenthood say the organization is the only way women in need can access contraceptives and receive some health screenings.

— On July 26, Cecile Richards, president of the Planned Parenthood Federation of America, appeared on ABC’s “This Week” to say that center’s first two videos were misleading and heavily edited. The Center for Medical Progress has maintained that full versions of the all of its videos are available for viewers, and that these are, in fact, more damaging to Planned Parenthood than the edited versions.

In response to criticism of the center’s efforts and tactics, David Daleiden, the center’s founder, said July 22 that Planned Parenthood is “trying to use the power of their political cronies” to shut down free speech and freedom of the press “and avoid accountability to the law and the American people.”

Planned Parenthood’s attacks, Daleiden added, do “not change the facts about what our investigation has uncovered and what the American people now know — that Planned Parenthood is engaged in an enterprise-wide operation that traffics and sells baby body parts.”