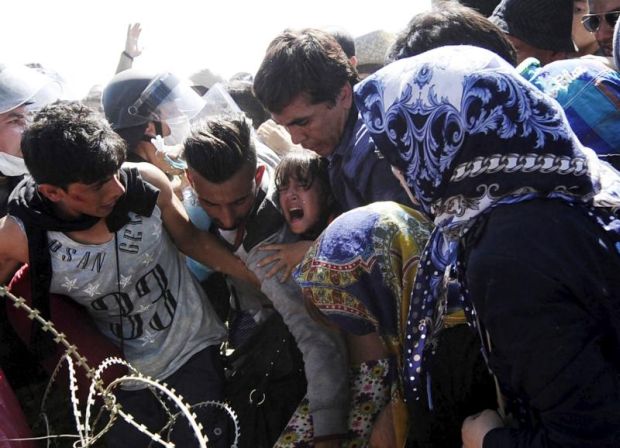 A young girl screams as migrants rush to cross into Macedonia at the Macedonian-Greek border Sept. 2. Catholic aid agencies have urged Europeans not to turn against migrants seeking refuge from Syria and other countries, in what media reports describe as the continent's greatest refugee movement since World War II. (CNS/Ognen Teofilovski, Reuters) 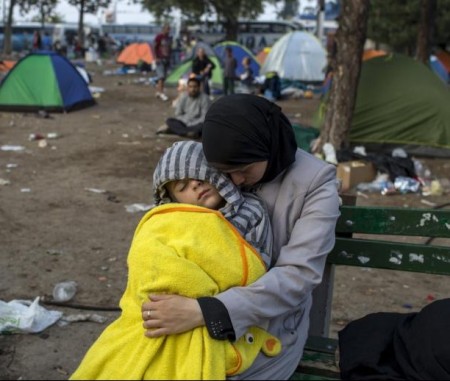 A migrant with a child sleeps in a park near the main bus and train station in Belgrade, Serbia, Aug. 26. (CNS/Marko Djurica, Reuters)

OXFORD, England (CNS) — Catholic aid agencies have urged Europeans not to turn against migrants seeking refuge from Syria and other countries, in what media reports describe as the continent’s greatest refugee movement since World War II.

“The crisis in Syria is now in its fifth year, and the neighboring countries where we’ve been providing assistance are running out of resources,” said Kim Pozniak, communications officer for Catholic Relief Services, the Baltimore-based U.S. bishops’ international relief and development agency. She said countries such as Lebanon and Turkey are sheltering 3.5 million Syrians and “can no longer carry the burden of sheer numbers.”

“People have realized they won’t be going home and turned to the European Union for longer-term solutions. While they’ve been shown compassion in some countries, this hasn’t been the case everywhere.”

“These people aren’t just migrating to Europe in search of a better life for their children: They’re fleeing to protect them and save their lives, and this is something everyone can relate to,” she said.

European Union foreign ministers met in Brussels to discuss new responses to the crisis Sept. 4, and the government of Hungary attempted to control thousands of migrants camped at a railway station in the capital, Budapest.

Pozniak told Catholic News Service Sept. 3 that CRS and other Catholic agencies had been given migrants food and water, as well as medical and legal help, on the main routes through Albania, Bulgaria, Greece, Macedonia and Serbia.

She added that church-backed organizations would aid all refugees without distinction, after some East European bishops called for priority to be given to Christians.

“The church doesn’t distinguish between faiths and religions — we assist everyone on the basis of needs, whatever their background,” Pozniak told CNS. “The church in the Middle East and the Balkans has been responding to this crisis for years, and to the church no human being is illegal. We’re called to preserve their dignity by not letting them sleep in parks and train stations.”

Antonio Guterres, U.N. High Commissioner for Refugees, urged Europe to build facilities to accept the migrants and to admit up to 200,000 refugees, with mandatory participation by all EU member-states. 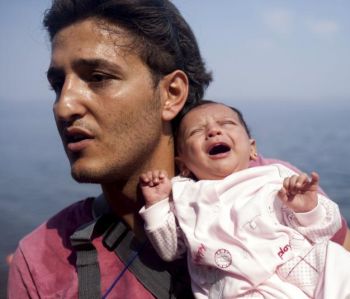 A Syrian refugee from Aleppo holds his 1-month-old daughter moments after arriving on a boat on the Greek island of Lesbos Sept. 3. (CNS/Dimitris Michalakis, Reuters)

However, in Hungary Sept. 4, members of parliament debated whether to declare a state of emergency as a tense stand-off continued between police and refugees in and around Budapest, and as work was completed on a 110-mile razor-wire wall closing the country’s southern frontier with Serbia.

The national deputy director of the Hungarian church’s Caritas charity, Richard Zagyva, told CNS Sept. 4 the 12-foot wall was intended to prevent “mass unregulated border crossings,” rather than to block out all migrants. He said Caritas hoped to continue providing aid once the refugees had been placed in camps for processing.

However, Hungary’s Sant’Egidio Community criticized the government actions as counterproductive. In a Sept. 3 statement it said it was concerned at moves to criminalize border crossings and allow police to search private homes in search of migrants.

Meanwhile, German Cardinal Reinhard Marx, president of the Brussels-based Commission of the Bishops’ Conferences of the European Community, urged legal entry routes for refugees and warned the building of fences would merely spur “new dramas.”

“Everything must now be done to ensure no one dies of thirst at our borders, drowns in the Mediterranean or gets starved and suffocated aboard a truck,” Cardinal Marx told Germany’s ARD broadcast consortium Aug. 31. “Money shouldn’t play a role when lives are being saved. Nor will any solution be provided by political disputes over a distinction between war and poverty refugees, all of whom have legitimate aspirations.”

Caritas Europa said in a statement that migrants, asylum-seekers and refugees were protected by international human rights law, and it called on the European Union to “contribute to such protection.”

Meanwhile, Jesuit Refugee Service said Aug. 31 “building more fences will only result in more deaths” and urged the EU to consider a “European humanitarian visa scheme” and “legal and safe channels for refugees to reach Europe.”

However, a Polish archbishop backed plans by the government of Slovakia to admit only non-Muslim refugees and called for priority to be given to “endangered Christians.”

“We don’t have such experience of accepting refugees, or foreigners generally, as the Western countries, especially those which once had colonies,” Archbishop Henryk Hoser of Warsaw-Praga told Poland’s Catholic information agency, KAI, Sept. 2.

In the Czech Republic, where human rights groups criticized police Sept. 4 for printing numbers on the hands of refugees, the bishops’ conference president, Archbishop Jan Graubner, also demanded in mid-July that his country take in only “Christian refugees.”

Catholic leaders elsewhere repeatedly have urged a more humane and effective EU policy toward migrants and refugees entering Europe from conflict-hit regions of the Middle East and Africa.

In Germany, which accepted 100,000 refugees in August alone, Catholic bishops have condemned 340 separate attacks on migrant shelters so far this year and backed parishes offering accommodation and support.

In Austria, where Caritas is helping 17,000 refugees and providing housing for 5,000, Vienna Cardinal Christoph Schonborn said Europeans could no longer “look the other way” when confronted with their continent’s “greatest humanitarian challenge” in decades.

NEXT: Doctrine, pastoral realities are not at odds, pope tells theologians