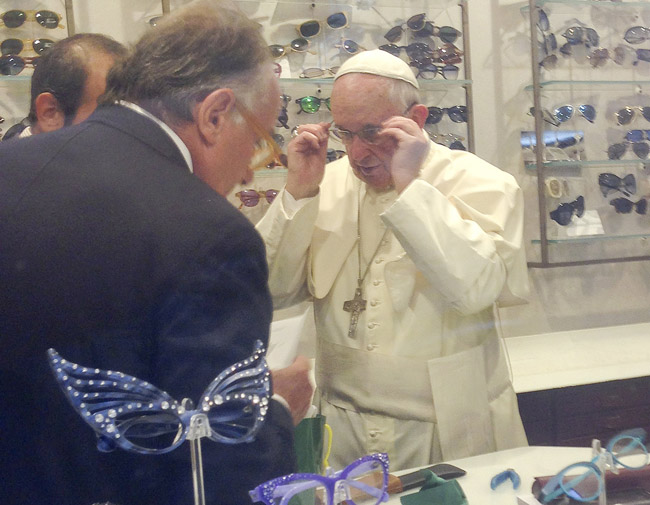 Pope Francis tries on a pair of glasses in an optical store in downtown Rome Sept. 3. Romans and tourists crowded outside the shop to catch a glimpse of the pope inside as he had his eyes measured for a new set of bifocal lenses. (CNS photo/Chiara Apollonj, Reuters)

ROME (CNS) — Pope Francis created a spectacle when he headed to Rome’s posh shopping district to make a surprise visit to his optician.

Romans and tourists crowded outside Alessandro Spiezia’s shop on Via del Babuino near Piazza di Spagna to catch a glimpse of the pope inside as he had his eyes measured for a new set of bifocal lenses.

According to Spiezia, the pope wanted to keep his old frames, which he bought from Spiezia last year, and just change the lenses with a new prescription for his far-sightedness.

“I don’t want to spend too much, let’s keep the old” frames, Spiezia said the pope told him, according to ANSA, the Italian news agency.

According to an interview with The Associated Press, Spiezia was going to go to the Vatican for the fitting, but the pope had said he didn’t want Spiezia to make the trip and that he would go to Via del Babuino.

Pope Francis again insisted he pay the full cost, according to ANSA. Spiezia told the Italian agency that the pope told him, “Listen, Alessandro, make me pay what is due.”

Last year Spiezia received five euros ($6) from the pope for a small repair that was needed for an old pair of glasses — a banknote he kept in his wallet with no intention of ever spending.

“In 50 years of being in business, many illustrious figures have come by here,” like Federico Fellini, famous Italian actors and writers, even former U.S. President Bill Clinton, he told reporters.

“But to receive the Holy Father is a thrill that gives you goose bumps,” he said.

He said he hopes to have the new lenses put in soon and deliver the glasses in person to the pope at the Vatican by next week.

“I want to get them to him before he leaves for Cuba and the United States” Sept. 19, he said.

Spiezia has also provided eyeglasses for Pope Benedict XVI, but not St. John Paul II, even though he had met the Polish pope, he told the Italian weekly, “Il Mio Papa,” in 2014.

St. John Paul had one eye that was near-sighted and the other far-sighted, so each one “made up for the other. That is why you never saw him with glasses,” he said.