To build new life in U.S., family has struggled but now ‘we are safe’ 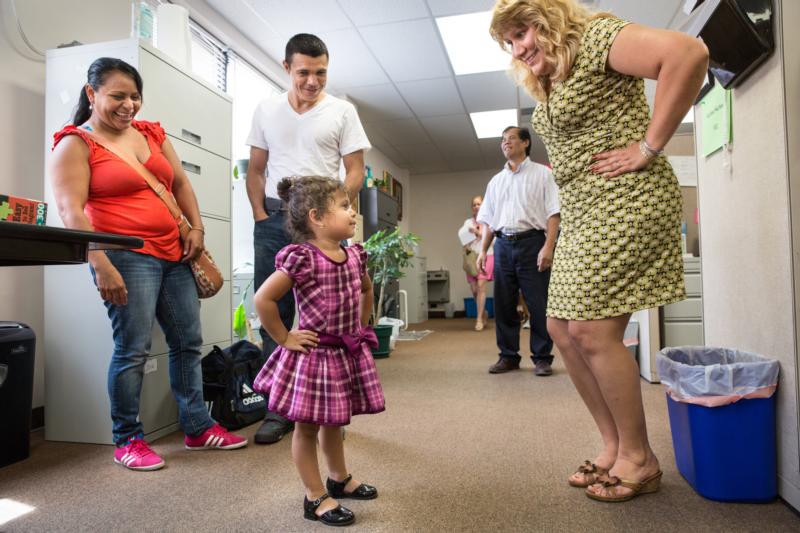 ST. LOUIS (CNS) — The police officers boarded a bus in the city headed to work. They relaxed on the ride through San Salvador, El Salvador, knowing that their day soon would be filled with both mundane police work and the tension in a violence-filled place fueled by gangs involved in drug trade.

Suddenly, armed gunmen boarded the bus, and before they could draw their weapons, gunfire erupted. Four officers were killed, including Roberto, who was shot four times in the head and three times in his chest.

Telling the story a year ago while at St. Francis Community Services Southside Center in St. Louis, where she and her daughter had come after fleeing the violence, Maria paused, her eyes welling with tears. But she pulled it together and continued. Roberto wasn’t just another victim — he was her brother.

Maria’s husband, Carlos, also a police officer, had been Roberto’s classmate in the academy and investigated money laundering and the drug trade. Then, two gangs responsible for the murder threatened to kill him — “attacks,” he called them. He struggled because the danger not only put him at risk, but also his family, who weren’t safe even to go to the store.

Roberto had wanted to be a police officer to contribute to his community, but told his sister, “I put in danger the family I love. It’s not their fault I’m a police officer. I feel responsible.”

“We would never be safe there,” said Maria, who used only her first name. She had been attending college to become a nurse practitioner.

Carlos and Maria packed a few possessions and grabbed a bus out of El Salvador. They had no money. They couldn’t buy food and couldn’t switch buses, so they split up. Hot and exhausted, worried about her future, Maria and her toddler, Alicia, crossed the border between Mexico and the United States first — at night with a group of women and children. Once across the Rio Grande, they waited to be stopped by immigration authorities, wanting to make their case for asylum. Others scattered, running in different directions.

Alicia’s ear was injured when she brushed against tree branches, so authorities took them to a hospital. The injury was minor and they were sent to a detention center. Five days later, they were released in Laredo, Texas, without money. They made contact with a Catholic organization that provided food, shelter and clothing.

“Without the help, we would have been on the streets, trying to find a place to sleep. They just left us there,” Maria told Catholic St. Louis, the magazine of the St. Louis Archdiocese. She expressed thanks for the generosity and support they received.

A relative in El Salvador sent her $300, and she bought a bus ticket from Laredo to St. Louis, where she connected with a Salvadoran friend. She’s been here for more than a year.

Her husband was detained after crossing the border and was sent to a detention center, eventually ending up in a detention facility in New Jersey. After days of silence, she scrambled to find him legal representation.

Maria’s living arrangements didn’t work out here — so she turned to St. Francis Community Services, a Catholic Charities agency with a Spanish-speaking staff, for help. She was able to sublease an apartment in a south St. Louis neighborhood.

Though still no word about her husband, who was still in detention, things were looking better for Maria and her child. She worked a few days a week as a housekeeper. She landed a job packing soaps and candles soon afterward.

She wore an ankle bracelet with a tracking device, placed on her by immigration authorities. Immigration and Customs Enforcement launched a program last year to use the GPS-enabled bracelets to track undocumented immigrant families released from custody.

At the time, she had regular visits from U.S. Immigration and Customs Enforcement agents. But she struggled with her landlord — he had subleased the apartment from someone else and eventually locked her out of the apartment. Desperate for help, she called Silvia Martinez of St. Francis Community Services.

As Maria waited for her landlord to show up, Martinez reflected on the struggles that Maria and her baby have endured.

“They came here with nothing,” Martinez told Catholic St. Louis. “No belongings.”

Two hours later, the landlord arrived, but Maria’s hopes for a resolution of her latest struggle soon were dashed. The disappointment showed on her face. He demanded cash for upcoming months’ rent. Maria didn’t have it and, though Martinez told the man she could get funds in a few days, he ordered her out of the place.

Maria and Alicia didn’t go homeless, however. With help from Martinez and others, they were taken in by a woman, Louisa, who is a native of El Salvador and came to the United States almost 10 years ago. Louisa’s middle child, a 16-year-old, gave up his room in the small duplex in south St. Louis for the guests. A portrait of Jesus is on the wall, and a statue of Mary is nearby.

“The house is kind of small, but (Louisa) has a lot of love to share with them,” Martinez said. “In this house, Maria feels she has love.”

Alicia now had toys, and she began learning the alphabet in English. This day, she watched educational shows on television in Spanish.

Another plus was the food. Louisa prepared many dishes from their native El Salvador. One, similar to a gordita with rice, chicken, vinegar, cabbage and onions, topped with cheese, is a favorite.

Louisa, who came from El Salvador 26 years ago, explained why she helped. “Because they are humans, and they need help,” she said. “And there’s a child. A child is an angel.”

Also, she is paying forward the generosity she received from Catholic Charities. Louisa, who used only her first name, and her family had struggles early on, living in 36 states because of her husband’s job as a roofer. Once they came to St. Louis, they visited Southside Catholic Charities and were helped to get their feet on the ground. Their three children were born in the United States, with the youngest, a teenager, born in St. Louis.

Maria still wore the monitor, which has to be recharged every three hours, even in the middle of the night.

Her husband was released on bond and came to St. Louis right after Thanksgiving last year.

The family has since moved to a basement apartment.

Maria and Carlos have been attending English as a Second Language classes at Kingdom House, and their English is improving. There, they also have learned about the geography and customs in the United States. “They work hard,” said Sarah Caldera Wimmer, the instructor. “I don’t envy them having to start over.”

The struggles of coming to a new land, fleeing what they feared would be an assassination — much as Joseph, Mary and Jesus did when they escaped Herod — was behind them now. The present had some struggles but overall was pleasant.

“My daughter has more freedom in this country; we are safe,” said Maria, who plans to go to school and dreams of owning a beauty salon someday, while her husband would like to own a business as well.

The future, however, is in the hands of an immigration court.

Kenny is a reporter at the St. Louis Review, newspaper of the Archdiocese of St. Louis, and writes for Catholic St. Louis, the archdiocesan magazine.

NEXT: Latino Catholics are church’s future, but also its present, says prof