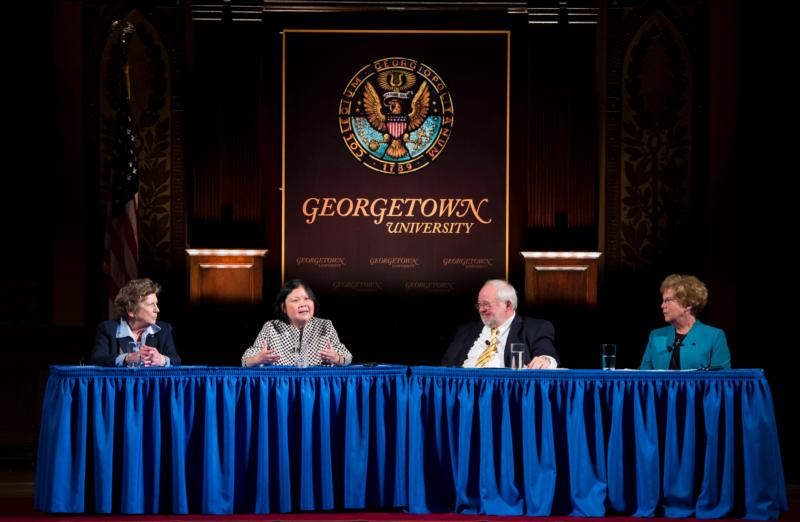 WASHINGTON (CNS) — Together, the Catholic organizations led by three women serve millions of people each year across the United States and around the world.

These three leaders — whose organizations are devoted to health care, serving the poor and overseas relief — said their faith guides their work in bringing the Gospel to life and helping those in need.

“I have to be grounded in the Gospel. I have to pray. I have to start and end my day in prayer. I have to listen to what God, what Jesus is saying to me in the Gospel,” said Dominican Sister Donna Markham, who in June became the president and CEO of Catholic Charities USA, and is the first woman to head that organization in its 105-year history.

She spoke at an Oct. 22 panel discussion at Georgetown University that also included Carolyn Woo, president and CEO of Catholic Relief Services, and Sister Carol Keehan, a Daughter of Charity, who is president and CEO of the Catholic Health Association. The dialogue, titled “Women Taking the Lead: Acting on Pope Francis’ Message,” was sponsored by the university’s Initiative on Catholic Social Thought & Public Life. John Carr, the initiative’s director, was the moderator.

Responding to a question on how she handles criticism from people who think that her agency is not Catholic enough or from others who say it is too Catholic, Sister Donna said Catholic Charities’ outreach to the poor is guided by the Gospel and Catholic social teaching.

“Poor folks are on the street. Their lives are not in tidy boxes,” she said, noting that people are helped, regardless of their belief, background or sexual orientation. “This is the right thing to do, because these are God’s people and they are suffering. … We’re there to help them, because they come to our door knocking, and they need help.”

Woo said she encourages critics “to judge us by the work we do, by how we keep our promise to the people we serve.” Since 2012, she has led CRS, the U.S. Catholic community’s overseas relief and development agency, which reaches almost 100 million people in 93 countries on five continents.

She noted that there are things her organization does not do — like distribute condoms — because “we stay with church teaching.” She added, “We work in the name of Jesus. What we are charged to do in the Gospel is very clear.”

Sister Carol said it is important to listen to and respond to criticism in good faith, but she added that criticism should be offered in the same spirit. Before becoming the head of CHA in 2005, she led Providence Hospital in Washington for 15 years. CHA includes more than 600 hospitals, which admit more than 5 million patients each year. The association also includes 1,400 long-term care and other facilities in all 50 states.

Noting that Catholic Charities is sometimes criticized for taking government funding, Sister Donna noted that 64 percent of the aggregate budgets of those agencies come from that source, about 7 percent come from the Catholic Church, and the rest come from donors. If Catholic Charities took no federal funds, what would happen to the millions of people who come to the agency each year for help with food, housing, disaster relief, mental health care and other services, she asked.

The panelists also expressed their admiration for Pope Francis’ leadership, which he displayed during his recent U.S. trip.

Sister Donna noted how Pope Francis, during his visit to Washington, “went straight from Congress in D.C. to one of the places that serves homeless folks.” She noted that in a talk to Catholic Charities’ staff, volunteers and clients at St. Patrick Church in Washington, the pope said, “We must see the face of Christ in the poor.”

Pope Francis encourages people to have the courage to go out and serve those on the margins, Woo said. “He speaks from the heart and lets the Holy Spirit guide him,” she said, adding, “I don’t want his visit to be a one-time event. … I want to build on it.”

Whether Pope Francis was addressing members of Congress or the homeless, or the United Nations or prison inmates, Sister Carol said, he offered an example of the importance of showing “God’s love to whoever you are and wherever you are. He calls you to be your best self. … He loves you and wants you to know how much God loves you,” she said.

The panelists also shared their thoughts on leadership and being women leaders in the Catholic Church.

“I work hard. When I go into a situation, I’m prepared,” Woo said. She also recommended leaders “take advantage of opportunities, and don’t take anything for granted.” Regarding leadership, she noted, “Don’t do it for yourself. Do it for the cause.”

She encouraged people to not only rely on analytics when faced with a challenging decision, but also “listen to your heart.”

Speaking about being a woman and a leader, Sister Donna said, “We have to be extremely hard working with high standards for ourselves and do the best job we can. I don’t feel I’ve ever run into difficulty being taken seriously once someone knows who I am and what I do.”

Sister Donna, who is a clinical psychologist, added that “a collaborative leadership style is very important to me. It’s something we women learn early on, how to get along, and how to help each other.”

Sister Carol echoed that point. “One of the things that helps in leadership,” she said, “is when we’re all together, and we work as a team.”

Speaking of the legacy of leadership of women religious in this country, Sister Carol noted how in earlier times when women had few work opportunities outside the home besides teaching and nursing, “at that time, women religious in the United States build the largest and most successful health care system that the world has ever known.” She added, “I stand on their shoulders and am profoundly impressed by them.”

She said her own life was shaped by the Maryknoll sisters who taught her in her native Hong Kong and gave her a lasting experience of God’s love.

Sister Carol said that in families, and in a male-led church, “it helps to have brothers,” and she noted that she has had good friendships and working relationships with members of the U.S. hierarchy, like the past three archbishops of Washington — the late Cardinal James A. Hickey; Cardinal Theodore E. McCarrick, who retired in 2006; and Cardinal Donald W. Wuerl, the current head of the archdiocese.

She noted how women do hold leadership positions in the church, adding that the Washington Archdiocese currently has a woman chancellor; she succeeded another woman who held the post.

When asked to share a personal encounter with the poor that shaped their lives and work, Sister Donna recalled how a homeless man helped her when she had a flat tire in a rough neighborhood in Detroit on Christmas Eve. He stayed with her until the road service arrived to fix her tire. He refused any money, and told her to “find someone who needs it more than I do.” He taught her the importance of being kind in every situation, she said.

Sister Carol remembered visiting the Philippines after a typhoon, and meeting a man whose wife and two children died in the storm, but he was focused on doing everything he could to help the survivors in his community. “Such selflessness is overwhelming,” she said.

PREVIOUS: Cause opens for Florida martyrs who proclaimed faith ‘at all cost’

NEXT: Catholic schools ‘help us see the world through Jesus’ eyes,’ says bishop