Cause opens for Florida martyrs who proclaimed faith ‘at all cost’ 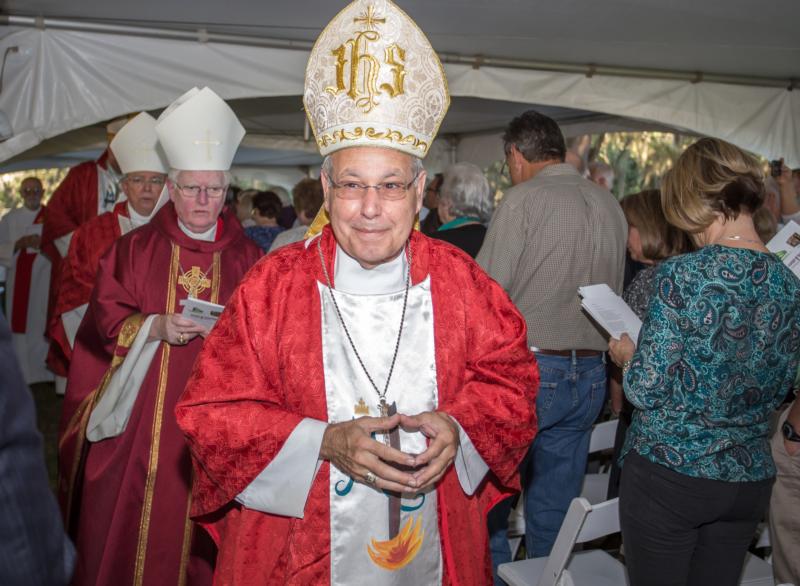 TALLAHASSEE, Fla. (CNS) — A slight breeze stirred the Spanish moss of the ancient live oaks as the late October afternoon sun slanted across the wide lawn of the deserted mansion.

It was easy to imagine going back more than 300 years to the dawn of the 18th century, hearing the sounds of an Apalachee village, and seeing the peaceful native people with their families. It was difficult to imagine the violence that would enter their world as they were brutally murdered by a British military force at war with their Spanish missionary friends.

The outdoor Mass and opening of the sainthood cause for 86 Florida martyrs — known as Antonio Cuipa and Companions — was celebrated Oct. 12, just east of Tallahassee, the site of what will become the Shrine of Mary, Queen of the Martyrs.

It’s just a short distance from U.S. Hwy. 90, known during the Spanish exploration and settlement of north Florida as El Camino Real, the king’s highway. The road once strung together the missions of Spanish Florida like a “string of pearls” bringing the Catholic faith to the indigenous people. Also along this road, atrocities were committed by the forces of a Protestant English king against these same people, in the name of conquest and colonization.

Bishop Gregory L. Parkes of Pensacola-Tallahassee was the main celebrant of the Mass.

Bishop Felipe Estevez of St. Augustine, retired Bishop J. Kevin Boland of Savannah, Georgia, and retired Bishop Sam G. Jacobs of Houma-Thibodaux concelebrated the Mass, along with priests from across Florida and Georgia.

In his homily, Bishop Parkes thanked all who came from far and wide to participate, saying that it was a “special, historic and important day for the church in Florida, as the 80 or more martyrs remembered lived and died in what are now the dioceses of Pensacola-Tallahassee, St. Augustine, St. Petersburg, Orlando, Palm Beach and Venice.

“From Father Luis de Cancer near Tampa Bay in 1549 to Antonio Cuipa and his companions at Ayubale in 1704, they gave their lives in witness to the faith,” Bishop Parkes said. “We pray that through their intercession, we may be empowered to imitate their example. We pray that they might inspire us to live more holy lives, always for the glory of God.”

Cuipa was an Apalachee Indian from San Luis Mission, in present-day Tallahassee, who was converted by Franciscan missionaries. His martyred companions included other Native Americans and Franciscan friars as well as Dominican and Jesuit missionaries. Father Cancer was the first Dominican martyr in the country.

At the conclusion of the Mass, Dr. Mary Soha of Ponte Vedra Beach presented Lynn Mangan of Tallahassee with a framed rendering of the vision of Cuipa. While hanging from the cross with fire at his feet, he said Mary appeared to him. He said to those who were being tortured with him, “Our Lady is near. Be strong; be strong. Our Lady is here with us.”

Cuipa was a leader among the Apalachee people, a carpenter and a catechist for the Franciscan friars. He was slain in 1704 at the mission of La Concepcion de Ayubale by the English and Creek forces of English Col. James Moore.

Soha commented as she presented the art that it was fitting that the story which began with the Shrine of Our Lady of La Leche at Mission Nombre de Dios in St. Augustine — the first shrine to Mary in the United States — would conclude where the story ended along El Camino Real with the deaths of the martyrs.

Following Mass the first formal session of the martyrs’ sainthood cause began with a procession of Bishop Parkes, Bishop Estevez, the members of the tribunal for the cause, and the vice postulators of the cause.

The history of the cause was recounted, as were the stories of the many martyrs who have been identified. The letters exchanged between Bishop Parkes and Cardinal Angelo Amato of the Vatican Congregation for Saints’ Causes were read aloud, establishing that Bishop Parkes, with consent from the other Catholic bishops of Florida, is the competent authority to investigate the cause.

Retired Bishop Rene H. Gracida of Corpus Christi, Texas, who was the founding bishop of the Pensacola-Tallahassee Diocese, took the first steps to open the cause in the 1980s. He was succeeded as postulator by Waldery Hilgeman of Missio Pastoralis in Rome. The vice postulators are Soha, Xaverian Brother Reginald Cruz, Lynn Mangan, Father Leonard Plazewski and Father Wayne Paysse, a New Orleans priest who is former executive director of the Black and Indian Mission Office in Washington.

Interrogation of witnesses for the cause — to be conducted by Father Fowler — will begin immediately primarily in Tallahassee at the Florida Conference of Catholic Bishops. Bishop Estevez is scheduled to be the first to testify Nov. 4.

In his address at a dinner following Mass, Bishop Estevez posed the questions: “Because we care about the communion of saints, we care about the Florida martyrs, for, if we do not, who will? If we don’t care now, when will we?

“We want to promote the martyrs of Florida because we want to know their stories accurately, establish the historical facts, and when approved by Holy Mother Church, we want to seek their intercession. As they were victims for their religious freedom — today we need their courage to stand firm in the current waves of secularism and subtle persecution.”

Recounting the earliest beginning of the cause, when Pope Clement XI established a commission in 1704 to document the martyrdom of the Apalachee Christians, Bishop Estevez traced the history of the initiative to the present day.

“It is significant that the passage of time has allowed us to discover that it was not only foreign missionaries who laid down their lives for Christ in La Florida. Rather, we now know the incredible stories of so many Native Americans who chose martyrdom rather than renounce the faith they had accepted. It is a meaningful sign that the faith was not simply imposed upon them, but rather they freely accepted the Catholic faith to the point that they understood that it was worth dying for.”

Bishop Estevez continued, “The one faith is expressed in different ways. There can be no question of adulterating the Word of God or of emptying the cross of its power, but rather of Christ animating the very center of all culture. Not only is Christianity relevant to these Indian people, but Christ, in the members of his body, is himself ‘Indian.'”

DeKeyser is a freelance writer and editor in Florida.

NEXT: Women CEOs say faith guides their work in bringing Gospel to the needy