Church concerned by potential impact of 172-mile canal across Nicaragua 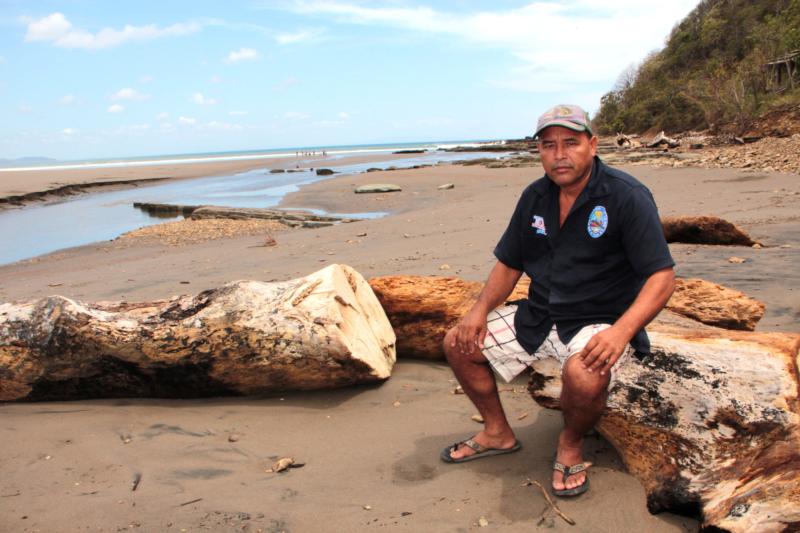 Fisherman Joseph Enoch Rodriguez sits on a log Sept. 9 in Boca de Brito, Nicaragua, a small community on the Pacific coast. Catholic Church representatives in Nicaragua are concerned about the potential social and environmental impact of building a 172-mile-long canal through the country to link the Pacific and the Atlantic oceans. (CNS photo/Edgardo Ayala)

MANAGUA, Nicaragua (CNS) — Catholic Church representatives in Nicaragua are concerned about the potential social and environmental impact of building a 172-mile-long canal through the country to link the Pacific and the Atlantic oceans.

They are also worried about the uncertainty that surrounds the project, because concrete information is hard to find.

“We have said that it’s OK if the canal bring benefits to the people, but the government needs to act with transparency and clarity, because there is not enough information,” Bishop Jorge Solorzano Perez of Granada told Catholic News Service.

The concession to build and operate the canal for 50 years, renewable for another 50, was awarded in June 2013 to a newly created Chinese-Nicaraguan consortium HKND Group. The group is headed by Chinese businessman Wang Jing, who has apparently brought further investors on board to finance the $50 billion project, but nobody seems to know who they are, according to local media.

Last December, the Nicaraguan government began paving a road in for the project, which supporters argue will boost the economy and create 250,000 much-needed jobs for one of the poorest countries in the region.

Nicaragua Grand Canal and Development Project, according to HKND’s official website, “is a major infrastructure project with the potential to transform global trade, and make Nicaragua an important hub for transportation and logistics.”

The project, if finished, will connect the Pacific and Atlantic oceans across this Central American country of 6.1 million people. It will be about 570 yards wide and nearly 100 feet deep.

An airport is planned for the canal, as well as two ports and a free-trade zone.

Despite the enormous scale of the project, Nicaraguans say they have not been told crucial information, such as the predicted environmental impact.

“The pope has said in the encyclical ‘Laudato Si” that when projects are carried out without the appropriate environmental impact studies, they should not be done,” said Bishop Solorzano, whose diocese is on the shores of Lake Nicaragua.

There is a risk that the lake — which covers 3,100 square miles and is the largest lake in Central America — could be affected, since the canal route will cross it and engineers will have to dredge to make a deep enough corridor for the canal.

Dredging would spread the toxic sediment that lies on the lake bed and threaten its marine life, environmentalists have warned.

“How the project will affect the lake is one of the major concerns of the people of Granada,” said Bishop Solorzano.

Environmental Resources Management, a British company hired by HKND to conduct an environmental and social impact assessment, presented its findings to the Nicaraguan government June 1.

The HKND website says, “The ESIA report demonstrates that the grand canal will have a positive impact on social and environmental terms.”

But in mid-June, scientists from the University of Miami said they had reviewed the document and that Nicaragua’s huge project “could become a mega-mistake without a sound scientific basis.”

“Data on biodiversity was limited to the canal’s 278 km-long footprint, while the project’s impact will inevitably spill over to a huge swathe of Nicaragua’s tropical forests,” the scientists said. They added that little data was provided on water quality, flow and currents for the area of the canal crossing Lake Nicaragua.

Catholic News Service did not receive a response when it attempted to contact HKND.

In March, the Nicaraguan bishops’ conference warned that any development project should aim to benefit the people. The bishops put out a call to avoid “new forms of unjust growth marked by geopolitical and corporate interests,” clearly alluding to the canal.

Dominican Father Rafael Aragon Marina, in charge of current affairs programs at Radio Veritas, a community station in Chinandega, said he has serious doubts about the project.

“In addition of lack of transparency, for me the problem is that there are other economic, social and political interests,” he told CNS. He said the uncertainty surrounding the canal has led many people to doubt that the canal will actually be built, and they see it as a cover for other economic projects that the government wants.

“They want to advance projects that fulfill the very role they fought against in the 1980s: neoliberalism,” said the priest.

Nicaraguan President Daniel Ortega, the canal’s main proponent, was a leader of the leftist guerrillas that in 1979 toppled dictator Anastasio Somoza Debayle. And although official propaganda emphasizes the government’s socialist credentials, his opponents criticize his pro-capitalist attitude.

Fisherman Joseph Enoch Rodriguez of Boca de Brito, a small community on the Pacific coast in the department of Rivas, told CNS, “The canal is a mystery because no one knows whether it’s going to be built.”

Work on the canal is scheduled to start at Boca de Brito, but HKND is still conducting research toward the final plan.

Besides the environmental risks, critics highlight the plight of 27,000 people who will be displaced because their land lies in the way of the canal, and large protests have been held against it in their communities.

Social organizations and peasant leaders organized a national march against the canal Oct. 27, and although the government ordered police to block roads to prevent protesters from arriving in trucks from various parts of the country, many made their way to Managua, although not to their final destination: the Nicaraguan congress.

The government organized its own march in which activists of the ruling party and state workers supported the construction of the canal.

Meanwhile, some Nicaraguans, such as Rodriguez, see the project as a job opportunity.

“It’s hard to find decent work in Nicaragua. Fishing is going downhill, and I would be happy if I could get a new job. Remember that we are untrained, uneducated and poor,” he said.

NEXT: Language must change in order to build peace, cardinal says