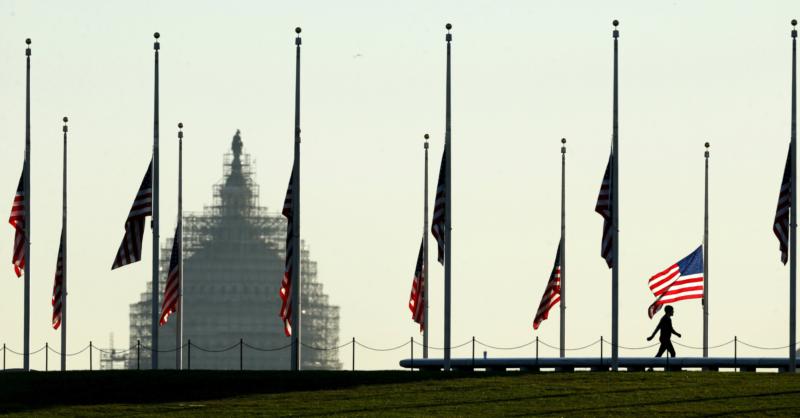 The dome of the U.S. Capitol is seen as a man walks past flags flying at half staff at the Washington Monument on the National Mall in Washington Nov. 16. (CNS photo/Kevin Lamarque, Reuters)

WASHINGTON (CNS) — An outpouring of grief, condolences and prayers came from Catholics across the United States in reaction to Nov. 13 evening attacks in Paris, attacks the French government said were carried out by three teams of Islamic State terrorists.

The U.S. Catholic bishops Nov. 14 pledged their prayers for those killed and injured at three sites in France’s capital and voiced their support for those “working to build just and peaceful societies.”

“Terror always seeks to separate us from those we most love,” said a statement issued by the Administrative Committee of the U.S. Conference of Catholic Bishops. “Through their suffering, courage and compassion, Parisians are reminding us that the common bond of humanity is strongest when the need is greatest.”

“To the people of France, we mourn with you and honor the lives lost from several nations, including our own,” said the committee, which is comprised of USCCB’s officers, committee chairmen and other bishops representing every region of the United States.

“To our brothers and sisters in the church in France, your family in the United States holds you close to our hearts. May the tender and merciful love of Jesus Christ give you comfort during this great trial and lead you on a path toward healing and peace,” added the statement, issued from Baltimore, where the bishops were meeting ahead of their Nov. 16-19 general fall assembly.

In Paris, at least 129 people were killed and more than 350 injured, many of them critically in the attacks. A suicide bomber blew himself up outside a soccer stadium, gunmen attacked customers at cafes and restaurants, and a team of terrorists gunned down dozens of people at a concert.

Pope Francis called the attacks an “unspeakable affront to the dignity of the human person.”

In Boston, a Sunday morning Mass at the Cathedral of the Holy Cross Nov. 15 brought together residents of the greater Boston area to pray for and remember the victims in Paris, and to pray for peace.

Father Kevin O’Leary, the cathedral’s rector, read a message of condolence from Cardinal Sean P. O’Malley, who had already left for the bishops’ meeting in Baltimore.

“There is absolutely no justification for the heinous actions which took place in Paris this past Friday,” the cardinal said. “We decry all such violence, which serves only to cause pain and suffering on the part of all who are directly impacted and the international community.

“May those who would strike out against others turn their hearts and minds to the peaceful resolution of disputes and embrace respect for the dignity and sanctity of the lives of all people,” Cardinal O’Malley said.

“We call upon the grace and strength given by Jesus Christ, trusting that those who perished in the attacks are welcomed into his blessed presence,” he added.

In Miami, French-speaking Catholics gathered at St. Thomas the Apostle Church for Holy Hour Nov. 14 to pray for the victims.

“I prayed for all the victims and all the families, and all the future (victims) because I’m sure there will be some others. And I prayed for the conversion of the terrorists,” said Amicie de Colonges, a native of France who has been a member of St. Thomas the Apostle Parish for two years.

“We are very sad. We are very shocked. We are angry,” said Augustin Bondonneau, a member of St. Kieran Parish in Miami, who attends a once-a-month Mass in French at St. Thomas.

“But at the same time, we’re coming here to see Christ. When he said I’m going to give you my peace, it’s that peace we are asking for,” Bondonneau told the Florida Catholic, Miami’s archdiocesan newspaper.

The trilingual Holy Hour was led by Father Alejandro Rodriguez Artola, pastor of St. Thomas, who learned French while working as a ballet dancer in that country. His sister lives in France and he still has friends there.

Last year, he added a once-a-month Mass in French to his parish’s schedule after meeting de Colonges and other French Catholics who live in South Miami, Coral Gables and the Brickell area. About 75 people attend the 7 p.m. vigil Mass each month.

“This morning I woke up with a call to do something with our French brethren,” said Father Rodriguez Artola.

Marie Sanson came with her three boys. Her husband was in Paris Nov. 13, watching the soccer game between France and Germany on TV. His return trip was set for the next day, so he was flying to Miami as his family prayed.

“I think it’s not like terrorists. It’s like war. It’s a new kind of war, but it’s a war,” Sanson said, her words echoing those of Pope Francis, who has referred to the 21st century’s litany of terrorist acts as a “piecemeal” third world war.

“They fight against their own country,” Sanson added, alluding to the fact that some of those who carried out the Nov. 13 attacks were young and French-born. “But the problem is they don’t feel French.”

Atlanta Archbishop Wilton D. Gregory in a Nov. 16 statement urged people to work together to “bring an end to such hatred” that led to the terrorism attack.

“The tragedy of the terrorist attack on the people of Paris is but another sign of the violence of a radical group of people who seek to destroy not only human life, but societal stability and harmony,” he said. “They cannot succeed. We must not, however, simply become imitators of their hatred, but remain determined members of humanity who will not tolerate such brutality, but will work together to bring about an end to such hatred and human destruction.”

New York Cardinal Timothy M. Dolan in a Nov. 14 statement called the attacks “unspeakable and horrific crimes.” He said he joined the pope and the USCCB “in condemning these brutal acts of terrorism, and praying for those who were killed and injured, along with their families and loved ones.”

He said he had contacted Cardinal Andre Vingt-Trois of Paris “to express the sympathy and solidarity of all New Yorkers at this terrible time.”

“Sadly, New Yorkers are all too familiar with the pain and sorrow that accompanies these kinds of terrorist acts,” Cardinal Dolan continued, “but I echo the (Paris) cardinal’s call that ‘no one indulge in panic or hatred’ but continue to respond with ‘moderation, temperance and control,’ just as New Yorkers did in the aftermath of 9/11.”

He added that he, too, was already in Baltimore but had asked that the victims of the Paris attacks be remembered “in a special way” at Sunday Mass at St. Patrick’s Cathedral. He also noted that the pastor of the French national parish in Manhattan, Notre Dame, had assured him special prayers would be offered at Mass there as well.

At Holy Family Church in Manhattan, a parish that serves many people who work nearby at the United Nations, Father Gerald E. Murray, pastor, told Catholic News Service he had offered special prayers for the Paris victims at Sunday Mass Nov. 15. He planned to reiterate them at the weekly French-language Mass at lunchtime Nov. 17. He expected the normal congregation of about a dozen people to swell to 100.

“I prayed for the souls of those who were killed, for healing for the injured and consolation for the grieving family and friends, and also for victory over ISIS so we don’t have any more of these attacks,” he said. “We’re praying for the military too,” Father Murray added.

In Chicago, Archbishop Blase J. Cupich issued a statement on behalf of the Catholic community expressing “deep sadness at the depraved taking of innocent life this week in Paris” and called it “a sin and a crime against humanity.”

“Those who sought to kill and terrorize,” he noted, “have prompted by their cowardice a brave new commitment to the spirit of liberty, equality and fraternity that mark the French nation.”

“Parisians comforted the wounded and grief stricken, opened their homes to the displaced and stranded and stood in lines to donate their blood to replace that spilled by the terrorists,” Archbishop Cupich said.

“Let it not divide but call the citizens of the world to prayerful solidarity with the people of France and with all those who yearn for peace,” he added.

Contributing to this story was Ana Rodriguez-Soto, editor of the Florida Catholic, newspaper of the Archdiocese of Miami, and Beth Griffin in New York.