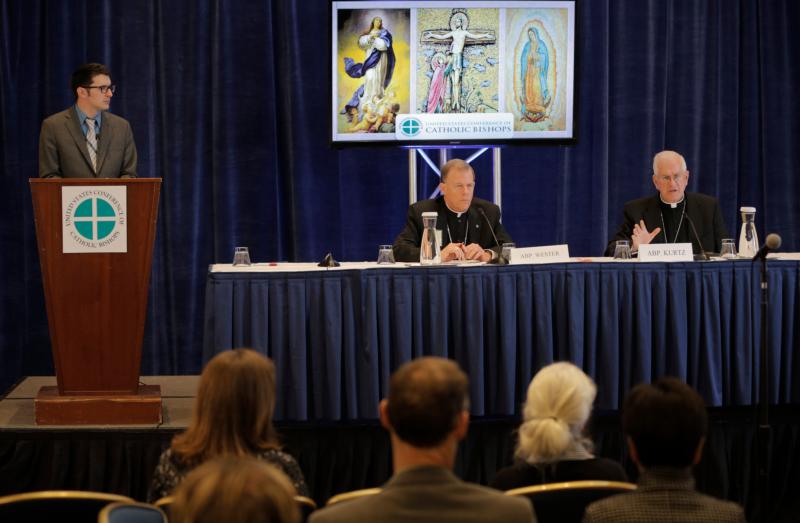 BALTIMORE (CNS) — Church resettlement programs in the United States will continue to aid refugees who are fleeing violence and social ills despite calls that the country’s borders should be closed to anyone but Christians.

The church’s response is focused on people in need of food, shelter and safety and not their particular faith, Archbishop Joseph E. Kurtz of Louisville, Kentucky, president of the U.S. Conference of Catholic Bishops,
told reporters Nov. 16 during a midday break at the bishops’ annual fall general assembly.

“We at the United States Conference of Catholic Bishops and Catholic Charities, we are always open to helping families who come into the United States in need of help,” he said at a news conference. “We have that tradition of doing it and we’re going to contribute.”

Archbishop Kurtz explained that any assistance provided to refugees and immigrants is carried out under government contracts and that the vetting of newcomers will have been completed by government agencies long before church agencies become involved.

“Our efforts are going to be to reach out to people and to serve them,” the archbishop said.

“My hope would be that the church would continue to be able, within the law, to help those families.”

Questions about U.S. practices in the resettlement of refugees were renewed in the wake of the Nov. 13 attacks by extremists on popular venues in Paris. French authorities said coordinated attacks left at least 129 people dead and more than 300 wounded. Police raids in France and Belgium have led to the detention of several suspected extremists.

The archbishop said he and other USCCB representatives met with President Barack Obama at the White House Nov. 13 to discuss immigration.

Archbishop Kurtz was guarded in his comments about details of the Obama meeting, saying it was initiated by the White House and that he did not want to violate the president’s request for privacy about it.

He told Catholic News Service that prison reform and religious freedom also were discussed with Obama.

The archbishop also said that he planned to meet with House and Senate leaders Nov. 19.

“One of the areas we’ll be looking at is bipartisan efforts to reach out in a manner that takes into account the safety of the families and our capacity to reach out to people of all faiths,” Archbishop Kurtz said.

Archbishop John C. Wester of Santa Fe, New Mexico, chairman of the bishops’ Committee on Communications concurred during the news briefing, saying the faith of people being resettled is not a factor in the church’s outreach efforts.

NEXT: Bishops hear details on 2017 Orlando convocation for Catholic leaders