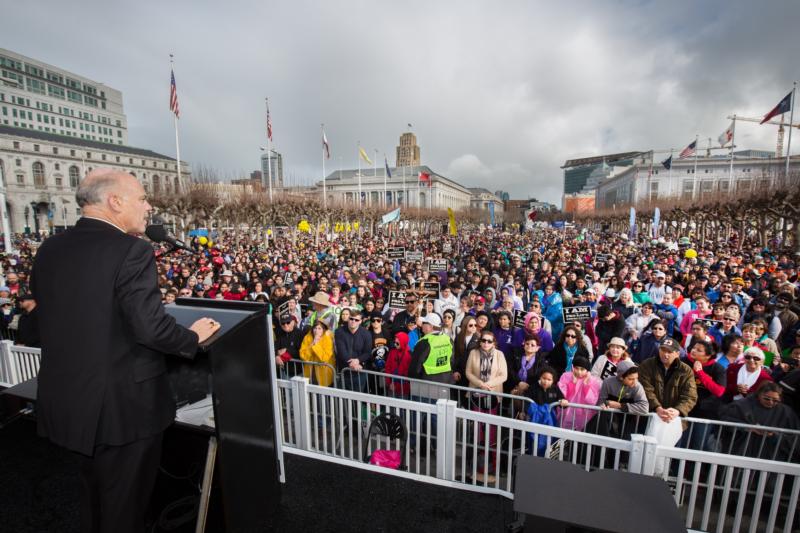 SAN FRANCISCO (CNS) — Tens of thousands of people rallied in San Francisco’s Civic Center Plaza Jan. 23 and then walked down Market Street for the 12th annual Walk for Life West Coast, undaunted by intermittent rain, abortion protesters who briefly disrupted one of the speakers, or by traffic congestion related to the upcoming Super Bowl.

“They tell us the lie that women — in order to have opportunities and in order for us be successful — we must have abortion rights,” said Obianuju Ekeocha, Nigerian founder and president of Culture of Life Africa, at the rally. Culture of Life Africa’s philosophy is consistent with St. John Paul II’s theology of the body. It rejects international aid tied to abortion, sterilization and other anti-life initiatives.

Center for Medical Progress founder David Daleiden — whose undercover videos recorded Planned Parenthood officials discussing payments for procuring organs and other body parts from an abortion and how best to keep them intact during the procedure — was the first speaker at the one-hour rally at Civic Center Plaza.

The videos led Congress to vote to defund Planned Parenthood in January; President Barack Obama vetoed the measure and the House plans a vote to attempt to override the veto. The videos also prompted Planned Parenthood to file a lawsuit charging the center, Daleiden and others with violating the Racketeer Influence and Corrupt Organization Act, known as RICO. Planned Parenthood claims Daleiden’s undercover investigation was a “criminal enterprise.”

Daleiden also is now facing an indictment on a felony charge and a misdemeanor charge related to his video project. A Houston grand jury Jan. 25 handed down the indictment, while finding Planned Parenthood has done no wrongdoing, according to an AP story.

“The videos raise the biggest question that Planned Parenthood and their allies cannot answer,” Daleiden told the San Francisco rally. “That is how on the one hand in our country the humanity of the baby fetus is not considered to be equal enough to our own in order to be totally protected by law. But at the same time, it is precisely their equal and identical humanity to our own that makes them so valuable for sale.”

A Californian, Daleiden listed some of the many saints cities are named for in California, including St. Francis, St. Joseph, the angels and St. Clare. “I don’t believe that the curse of abortion and the curse of Planned Parenthood baby trafficking can last forever in a state like ours,” Daleiden said.

Several people who were behind the stage demonstrating in favor of abortion briefly interrupted Daleiden’s speech. They ripped off their shirts to display an obscene slogan written in black ink, and threw fliers on the stage before being handcuffed by police.

The Sisters of Life, whose founder Mother Agnes Donovan had just received the Walk for Life’s St. Gianna Molla award for pro-life heroism, tried to shield one of the three bare-breasted women from the men in front of City Hall taking photographs “and so they formed a rosary circle around her and were praying for her,” said Martha Garza, sister of Eva Muntean, the walk’s co-chair.

One of the Sisters of Life, who asked not to be named, said later, “The heart hurts for them.”

The women were charged with infractions of the city’s park code for baring their chests and with disturbing the peace under California’s penal code, said Officer Albie Esparza, a public information officer. The women were released from custody the next day.

A counterdemonstration of about 100 people also took place along Market Street, with participants waving orange signs: “Abortion on demand without apology.”

At the Walk for Life Mass earlier at St. Mary’s Cathedral, San Francisco Archbishop Salvatore J. Cordileone, referred to the videos and to California’s new assisted suicide law saying, “The big question is, what does this say about us as a society. How can we do this to ourselves?” The archbishop tied respect for the Eucharist and respect for life together and called upon pro-life supporters to be Jesus’ “light shining in the darkness.”

During the Walk for Life rally, Archbishop Cordileone imparted Pope Francis apostolic blessing, sent by Cardinal Pietro Parolin, the Vatican secretary of state, and Archbishop Carlo Maria Vigano, the apostolic nuncio. In part, the letter read, “Pope Francis sends warm greetings and his assurance of his closeness in prayer to all taking part in the annual Walk for Life West Coast.”

Other speakers included the Rev. Clenard Childress who has spoken at almost every Walk for Life West Coast, beginning with the first in 2005. The New Jersey Baptist minister is a national African-American voice for the unborn, marriage and family. The rally concluded with testimony by Emmanuel — Jesus Emmanuel Arturo Acha Martinez — a musical icon in the Latin world. “We are here in defense of life. We have to do it. We all have to do it,” Emmanuel said before speaking in Spanish to those gathered.

Walk for Life was founded in 2005 by a group of Bay Area residents with the mission of changing the perception that abortion is the answer.

NEXT: Pair who were in Benghazi say they felt God’s protection in firefight