With unemployment more than 80 percent, Zimbabweans struggle for basics 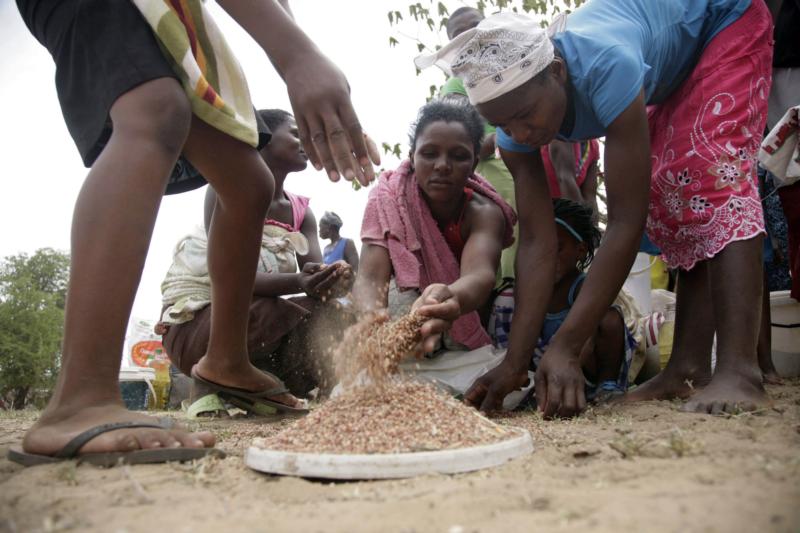 Villagers gather food Jan. 15 at a distribution point near Harare, Zimbabwe. With poverty on the rise and a drought compounding Zimbabwe's problems, people are struggling to make ends meet and the poor are becoming poorer, church workers said. (CNS photo/Aaron Ufumeli, EPA)

CAPE TOWN, South Africa (CNS) — With poverty on the rise and a drought compounding Zimbabwe’s problems, people are struggling to make ends meet, and the poor are becoming poorer, church workers said.

In Zimbabwe’s hospitals and other health facilities, “patients need to pay for everything: painkillers, drips, injections and scans,” said Getrude Chimange, coordinator of the justice and peace commission in Mutare Diocese.

“Industries have closed, leading to breadwinners losing their jobs and turning to informal trade on the streets, where they make very little money,” she said in a Jan. 27 telephone interview from Mutare.

“A stay in a general hospital in Manicaland province costs $9 a day,” Chimange said, noting that “the doctor or nurse gives the prescription and the patient needs to fill it at a pharmacy.”

Some patients “delay going to get the prescribed medication or having X-rays done for more than two weeks because they cannot afford it,” she said. “Lives are lost this way.”

“There are people who die on hospital operating tables when the electricity shuts down,” Chimange said, noting that “there are generators but these need fuel, which they don’t always have.”

Zimbabwe’s unemployment rate is estimated at more than 80 percent. An average monthly income for a family of four in Zimbabwe is around $180. The southern African country does not have a currency of its own and uses a basket of currencies dominated by the U.S. dollar.

The fall of the South African rand against the dollar by 25 percent in late 2015 was a harsh blow for households that depend on remittances from family members working in South Africa, said Father Frederick Chiromba, secretary-general of the Zimbabwe Catholic Bishops’ Conference.

“Many people are facing unexpected challenges because the money they are sent is not enough to cover the expenses that it used to cover,” he said in a Jan. 25 telephone interview from Harare. “They now can’t make ends meet.”

The cost of Zimbabwe’s staple starch, cornmeal, has risen steeply. A month’s supply for the average family in urban areas costs about $20 and more than $30 in rural southern Zimbabwe, where the drought has hit hardest.

Countrywide water shortages are a major problem, as well as the long distances many people have to walk to get to health facilities, Chimange said.

Every Thursday, Chimange interviews women in Mutare who come to see her about specific needs.

“The numbers are rising with increasing poverty, but we do not have funds to go beyond helping 40” women a week, she said. The funds are raised by priests from donors in developed countries.

The following day, she gives those in most need a basic food basket and the medication they require, or money to fill a prescription, or a contribution to school fees.

“It’s always the vulnerable who suffer the most” from Zimbabwe’s economic woes, Chimange said, noting that “basic medical care is a human right, and one expects government to make this accessible to all citizens.”

In Zimbabwe’s capital, Harare, parishioners are making their own peanut butter among other income-generating projects.

Zimbabweans “are being innovative and resilient as they look for ways to survive” the country’s worsening economic situation, Father Chiromba said.

At St. Peter’s Church in the Harare suburb of Mbare, parishioners are involved in more than 20 projects that enable them to put food on their tables, parish secretary Lavender Sambata said in a Jan. 25 telephone interview.

“People come together to help one another,” she said.

They sew school uniforms, raise chickens to sell and grind peanuts into paste, Sambata said, noting that parishioners are battling to buy food and pay for health care and school fees.

“People look out for one another, within their limited means,” Father Chiromba said, noting that in some parishes, “people choose to pay school fees for those who can’t afford them.”

Sister Diana Kanyere, a member of the Little Children of Our Blessed Lady who started the income-generating projects at St. Peter’s, now runs eight houses that serve as homes for 88 orphans in Harare’s Makumbe parish.

The 48 primary school children and the 40 attending secondary school need to be fed and clothed, and Sister Diana is planning similar projects to meet their needs.

The peanut butter project “provides nutrition, which is important for the children who otherwise would eat only plain porridge for breakfast,” Sister Diana said in a Jan. 26 telephone interview from Harare.

“Some of the children are HIV-positive, and so they need extra vitamins and minerals to boost their immune systems,” she said.

“We will make extra peanut butter and sell it at schools and other places,” she said, noting that another project she hopes to start is making detergents, such as liquid soap.

“I want to teach the children how to cook and sew and their carers how to treat injuries,” Sister Diana said.

One woman is employed in each house to oversee the children’s care, and there are a few other helpers too, she said.

The income-generating projects “are successful on a social as well as an economic level, with people working together and supporting each other,” Sister Diana said.

“People work hard to generate income, and when they make money through the project they repay the initial amount that they were given. This money is then used to help someone else start up,” she said.

PREVIOUS: More than 1,000 missionaries of mercy will serve during jubilee