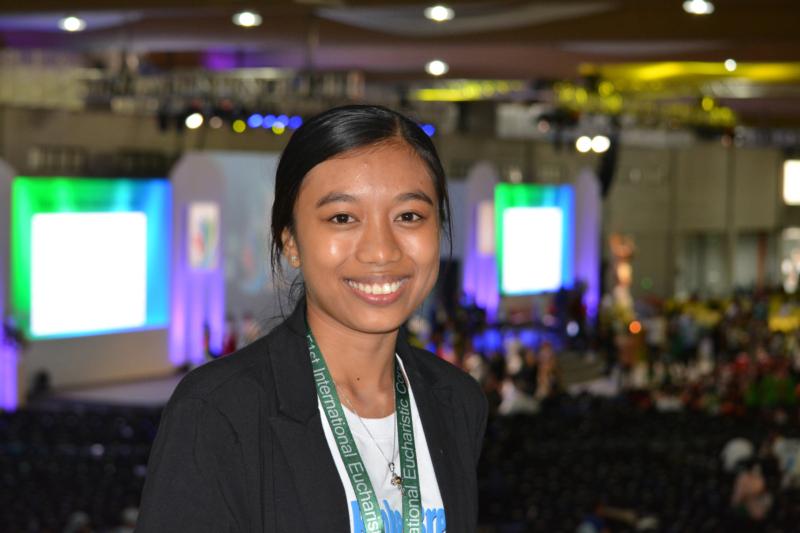 Former garbage scavenger turned mentor to street children Maria Georgia "Maggie" Cogtas is pictured Jan. 29 at the 51st International Eucharistic Congress in Cebu, Philippines. Cogtas moved many in the audience of more than 12,000 to tears when she told of a childhood without playing, only tough work as a garbage picker at dumpsites, construction sites and on the streets. (CNS photo/Simone Orendain)

CEBU, Philippines (CNS) — Maria Georgia “Maggie” Cogtas of Cebu told of a childhood without playing, only tough work as a garbage picker at dumpsites, construction sites and on the streets.

Cogtas, 21, also told more than 12,000 people at the 51st International Eucharistic Congress about the massive celebration two weeks ago commemorating the child Jesus, who has been venerated in Cebu for hundreds of years.

“On our peripheries were children scavenging, begging, busy selling cold water, food and candles in the perimeters of our churches,” said Cogtas. “As we happily celebrated the child Jesus, other children needed our attention. What have we done for them? Or are they also receiving the pathetic and emotionless look I got from people back when I was a street child?”

“Can we celebrate the Eucharist together in the International Eucharistic Congress with all pomp and pageantry and (then) allow everybody to crawl back into our respective oases of poverty and misery, or affluence and indifference?” he asked.

Cardinal Onaiyekan referred to the Gospel of the five loaves and two fishes that Jesus multiplied to feed a crowd of 5,000 with plenty leftover. He said Jesus feeling pity and concern for the hungry crowd showed mercy and nudged his disciples into action.

“Do something!” the cardinal exclaimed. “Do not say the problem is too much, you cannot feed everybody or that what we have would not make any difference. Jesus does not want to hear that. And God is challenging us: ‘Do the little you can with the right spirit and God will do the rest.’

“The miracle of the loaves can be repeated over and over again in our world of today if there are generous hearts among the disciples of Jesus ready to share what they have with those in greater need,” he said. 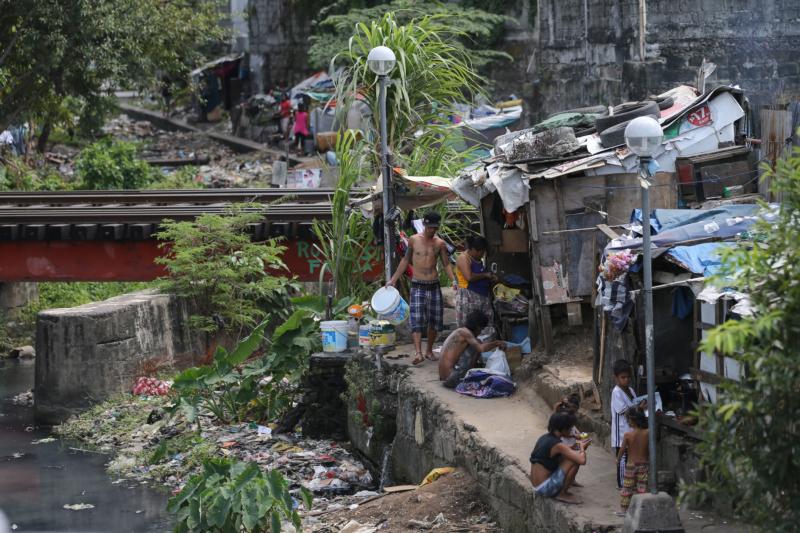 People are seen outside their makeshift homes by a polluted creek in Manila, Philippines. Speakers at the 51st International Eucharistic Congress in Cebu called on the faithful to remember to help the poor and suffering. (CNS photo/Mark R. Cristino, EPA)

Cogtas said before she became an active advocate for street children, she was so caught up in her pain and suffering that she barely made time to pray. She and her twin brother were the youngest of seven neglected children, abandoned by their father, with an absent working mother who eventually also left them.

“We had no choice but to fend for ourselves,” she said.

The recent psychology graduate said she was able to pay for high school with what she earned from scavenging. Then a Catholic organization that works to evangelize public servants, voters and young people offered her a college scholarship. Dilaab (Flame) Foundation scholarship recipients are required to give time to street children every week. To do this they had to go through training and formation.

Cogtas said seeing the street children accept their brokenness from abuse and neglect helped her overcome rejection, and she learned to stop being ashamed of herself. She said she was especially ashamed of her excessively sweaty palms, which often made people recoil from her touch.

As her confidence grew, she also developed a gift that only her hands could perform: drawing caricatures of people, which she said quickly gained acceptance from peers who had otherwise shunned her. Cogtas gave Cardinal Onaiyekan a caricature; Jan. 29, the day of his presentation, was also his birthday.

In the five years since Cogtas started working with the children, she noted how confident they had become. She said 90 percent of them were in school and “dreaming big.”

Dozens recently received first Communion, she said. At first the children wanted to receive Communion out of curiosity, but now they “greatly understand that the bread and wine is Jesus.”

“I am proud to say that I am one of the street children,” she said. “I came from a broken family. I had no more hope of going to school. But thanks to these street children they became a gift for me. I encountered God and was able to heal myself from some bad experiences.”

Cogtas expressed hope that the children would become public servants, such as police officers or teachers, engineers who could build homes for the poor, or priests who could evangelize. She said she wished their parents could find steady work so the children would not have to go to school on empty stomachs, without school supplies, an umbrella or rain shoes for the rainy season.

“How many have enough electricity to study?” she asked. “How many have someone to help them with difficult lessons? And after studying they could sleep soundly with a full stomach?”

Cogtas called on the church to help.

“What can we do so that they may not lose hope in God, if at times nobody can support them,” she asked. “There are a lot of street children that live outside our parishes. Can we not turn our parishes into child-friendly parishes with walk-in facilities, where they could take a bath, eat and study? Our churches are the closest place where they could see God. But they can also be the closest place where our children can see their dreams.”

PREVIOUS: With unemployment more than 80 percent, Zimbabweans struggle for basics

NEXT: U.S. scholar: Bible texts taken out of context lead to fundamentalism