From gangs to God: Mexican youths hopeful for papal visit 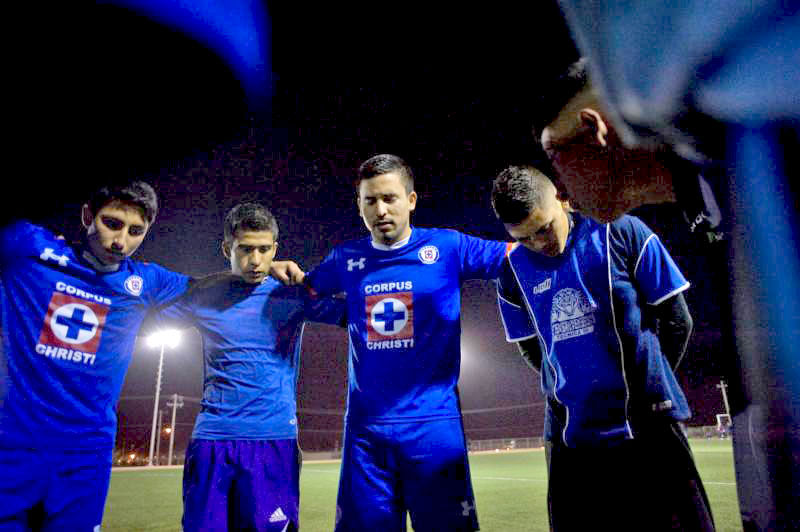 CIUDAD JUAREZ, Mexico (CNS) — Esteban Alanis, 23, once ran with a local gang known as “Los Parqueros,” which would accost people for their cash and cellphones in a working-class neighborhood of southeast Ciudad Juarez. He called the crimes “easy money,” while gang activities offered a sense of belonging and an adolescence of parties, girls and underage drinking.

Then Alanis survived a shootout in 2010 outside his home — and he turned his life to God, got out of the gang and likely saved himself from further involvement in the cycle of violence consuming Ciudad Juarez.

“That’s when my conversion started,” he said recently outside Corpus Christi Parish, where he teaches catechism classes. “I prayed to God that if I survived, I would give up gang life.”

When Pope Francis visits Ciudad Juarez Feb. 17, he is expected to address issues such as migration, victims of violence and conditions in the factory economy. Alanis and others working with young people expressed hopes the pope will have positive words for them, too, as they go about working with a population still somewhat scarred by the violence that claimed more than 10,000 lives between 2008 and 2012.

Ciudad Juarez was once murder capital of the world, an image now out-of-date, according to statistics from the citizen-run Security Roundtable of Ciudad Juarez, which shows a 92 percent decline in the homicide rate since 2010.

Rival drug cartels once clashed over a corridor for trafficking contraband to the United States. Gangs in the city previously preyed on the local population, carrying out crimes such as kidnapping, robbery and extortion, likely to finance the conflicts’ cost, security officials say. They also preyed on young people, who became “cannon fodder” for a conflict. An attack by gangsters on a birthday party in 2010 killed 15 young people, an atrocity that outraged the country even more after then-President Felipe Calderon erroneously said the victims were mixed up in illegal activities.

“Organized crime attracted a lot of young people,” said Mario Dena, the roundtable president, who said he believes that so many people were killed or imprisoned that it partially caused the crime rate to plunge. “They wrongly thought it would be easy money. That’s why there were so many victims.”

Church officials say the problem persists, though at a lesser level.

“We see that there are kids, probably 12 years, who are being approached by them (organized crime),” said Salesian Father Juan Carlos Quirarte, who also participates in the security roundtable.

Kids “don’t see many other options, and they mythologize these figures,” he added. “They (criminals) always have access to easy money, they have power, it’s seductive. Hence, it’s not easy to say, ‘Study, if you do, there’s a career.'”

At Corpus Christi Parish, crime was so problematic that thieves stole the bell and cars were robbed during Sunday Mass. Father Roberto Luna responded to the rising insecurity in the neighborhood of factory workers — 80 percent originally from other Mexican states — by doubling down on outreach. It including getting to know young people in the parish area.

“The way to promote belonging is to make people feel that this is their home and they are in their home,” Father Luna said, adding the approach is so successful he recently removed the bars protecting the building and leaves the doors unlocked. “Pope Francis spoke of a church with open doors. I said, ‘That’s it! I’m going to open up the church.’ … And nothing has happened.”

He also put a priority on catechism classes, which are no longer scheduled just on Saturdays, when many workers were having a hard time taking their children to attend.

“They have no excuse for missing catechism with me, because I have catechism every day to accommodate the varying factory schedules,” he said.

The pastoral approach of creating a sense of belonging and Father Luna’s incessant outreach and fondness for informality keep people coming to church.

“He says Mass in a way that’s dynamic, that isn’t boring,” said Francisco Ramos, 20, who credits the youth ministry for his return to high school after he dropped out. He said it also helped improve his relationship with his parents after a rebellious childhood.

On a recent Sunday, 23 young people attended catechism classes for confirmation led by Alanis, who now studies industrial engineering and works in an auto parts factory.

His life was not always so ordered. Alanis recalls seeing gangs on every corner of his neighborhood.

“It was a situation of be the aggressor or be the victim,” he recalled. “All my friends were in the gang. They were popular and admired.”

Alanis went through an initiation of fighting another person, then started robbing people in the neighborhood.

“If they resisted, we put the boots to them,” he recalled.

Church wasn’t a priority, though he showed up initially for “girls” in the youth group. Then the shootout occurred, and he became committed to church life. Like many in Ciudad Juarez, he’s eagerly awaiting the pope’s arrival.

“I hope the pope will give me more encouragement in my work with young people,” Alanis said.