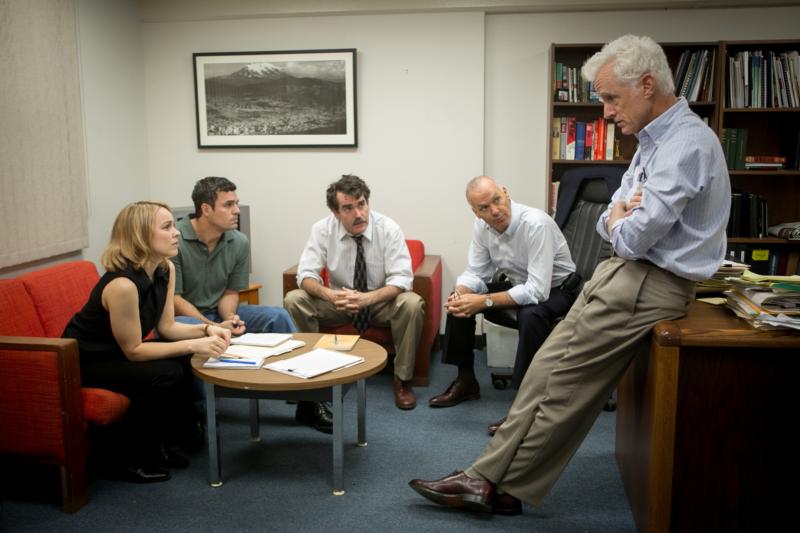 Rachel McAdams, Mark Ruffalo, Brian d'Arcy James, Michael Keaton and John Slattery star in a scene from the movie "Spotlight," which chronicles the Boston Globe's uncovering of the clergy sex abuse scandal in the Archdiocese of Boston in 2002. (CNS photo/Open Road Films)

“It is not an anti-Catholic movie, as has been written, because the film succeeds in giving voice to the alarm and deep pain” experienced by the Catholic faithful when a team of investigative newspaper reporters in Boston revealed the scandal of clerical abuse, said the article published Feb. 29 in L’Osservatore Romano.

The paper said it was also a “positive sign” when Michael Sugar, the movie’s producer, said he hoped the film would “resonate all the way to the Vatican.”

In his acceptance speech at the 88th annual Academy Awards Feb. 28, Sugar said the movie “gave a voice to survivors, and this Oscar amplifies this voice.” He then expressed hopes this voice would “become a choir that will resonate all the way to the Vatican.”

“Pope Francis, it’s time to protect the children and restore the faith,” he said.

The fact there was such an appeal, the Vatican newspaper said, was “a positive sign” because it shows “there is still trust in the institution (of the church), there is trust in a pope who is continuing the cleanup begun by his predecessor.”

“There is still trust in a faith that has at its heart the defense of victims, the protection of the innocent,” said the article, written by Lucetta Scaraffia, a professor of contemporary history and a frequent contributor to the Vatican newspaper.

“Spotlight” won two awards: one for best picture and one for best original screenplay. The film documents the Boston Globe’s investigation into the scandal and cover-up of the sexual abuse of minors by clergy in the Archdiocese of Boston.

The Vatican newspaper said the film does not touch on the “long and tenacious fight” by then-Cardinal Joseph Ratzinger, prefect of the Congregation for the Doctrine of the Faith, in launching action against abusers in the church.

“But a film can’t say everything, and the difficulties that Ratzinger encountered only confirm the premise of the film, that is, that too often the church institution did not know how to respond with the necessary determination before these crimes,” the article said.

While children are vulnerable to abuse in many other places, like in the family, school or sports teams, it said, “it is now clear that too many in the church were more worried about the image of the institution than the seriousness of the act.”

“All of this cannot justify the very grave crime of one, who as a representative of God, uses this prestige and authority to take advantage of the innocent,” the article said.

The film, in fact, shows the kind of devastation wrought on victims when “they don’t even have a God to plead with anymore, to ask for help,” it said.

Jesuit Father Hans Zollner, a member of the Pontifical Commission for the Protection of Minors, told Vatican Radio many bishops had urged others to see the film and “take seriously its central message, which is that the Catholic Church can and must be transparent, just and committed to fighting abuse, and it must ensure it never happens again.”

Catholic leaders cannot think clerical sexual abuse will go away if they don’t talk about it, Father Zollner said. “I think this is one of the central messages of the film.”

Director Tom McCarthy had said that while he’s excited the pope is a “forward-thinking, inclusive, progressive, reform-minded person,” addressing the scourge of sexual abuse will not occur overnight.

“He’s taking over the reins of an institution that does not change very quickly,” McCarthy said in an interview with America magazine in November 2015.

“Like any leader, within his institution, he’s got his work cut out for him. What remains to be seen is how much change, how much action happens under his guidance. I think you just have to wait and see,” McCarthy had said.