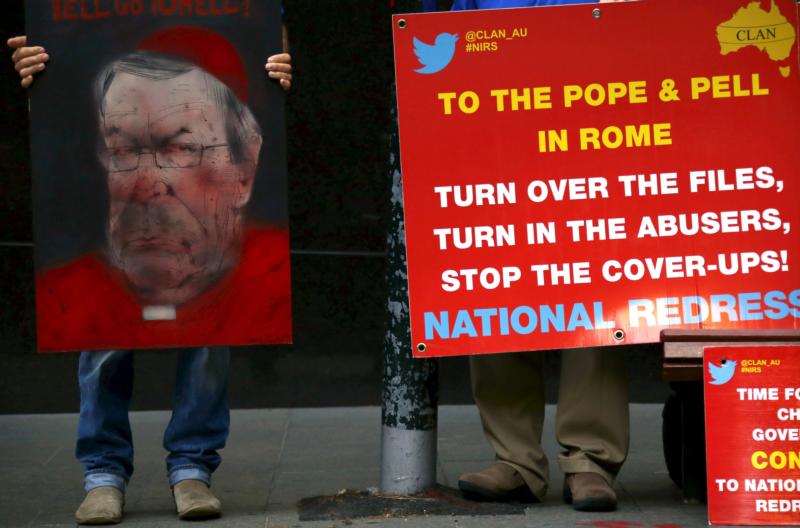 Victims and relatives of children who claim they were sexually abused by the Catholic Church hold placards as they stand outside the venue for Australia's Royal Commission Into Institutional Response to Child Sexual Abuse in Sydney Feb. 29. (CNS photo/David Gray, Reuters)

SYDNEY (CNS) — The Vatican’s prefect of the Secretariat for the Economy, Cardinal George Pell, told a special hearing of Australia’s Royal Commission Into Institutional Responses to Child Sexual Abuse that he was not trying “to defend the indefensible.”

Commencing the morning of Feb. 29 — 10 p.m. Feb. 28 in Rome — Cardinal Pell gave evidence at a special session convened in Rome’s Hotel Quirinale via video link to the Commission in Australia, from where he was questioned for four hours by Gail Furness, senior counsel assisting the commission.

“The church has made enormous mistakes and is working to remedy those,” he said. “The church in many places, including Australia, has mucked things up and let people down, and I’m not here to defend the indefensible.”

A heart condition prevented the cardinal from making the flight back to Sydney for the hearing, with the commissioners agreeing to his request to give evidence via video link.

The Royal Commission also ruled that Australian survivors of abuse, their supporters and media from Australia would be permitted to be in the room while the cardinal testified, and the Verdi room at Hotel Quirinale was filled to capacity for his evidence.

It is the third time Cardinal Pell has testified before the commission; he appeared in person in March 2014 and again later that year via video link from Rome. He answered questions for four hours and was expected to repeat those hours for two-three more nights as the hearings continue.

The Royal Commission was announced by then-Prime Minister Julia Gillard in November 2012 and was tasked with making recommendations on issues relating to child protection in institutions and government. It is empowered to employ a combination of public and private hearings, roundtable discussions and research projects, but has no ability to make findings in relation to criminal conduct.

Cardinal Pell arrived at the Rome hotel about three hours before he was due to testify.

Furness began her questioning by asking Cardinal Pell about his role and authority within the Holy See, the Pontifical Commission for the Protection of Minors and the new judicial section set up within the Congregation for the Doctrine of the Faith to judge bishops on matters of abuse of office connected to the abuse of minors.

He confirmed that his advice was sought on the establishment of the pontifical commission, that he fully supported it, and that while he did not control the resources made available to it, had made it clear that anything it wanted should be provided.

Focus then turned to the cardinal’s early years as an assistant pastor in the Diocese of Ballarat, a large diocese spanning some 22,000 square miles in western Victoria. Cardinal Pell spent the initial years following his 1966 ordination studying in Rome and the United Kingdom and did not take up his first appointment as an assistant pastor until mid-1971.

He told the commission that during the early 1970s there was a predisposition to not believe children and that, too many times, complaints were dismissed in sometimes “scandalous” circumstances.

He said that reasonable complaints were dealt with poorly by church authorities and that the instinct was to protect the institution and community of the church from shame. He also commented that there was a well-intended overestimate of what could be treated by psychiatry and psychology.

Quizzed at length about his knowledge of complaints against Msgr. John Day, a priest who died in 1978 before any charges could be laid against him, Cardinal Pell said that while he could recall some discussions at the time incidents were reported in a newspaper in 1972, Msgr. Day’s parish in the town of Mildura was 120 miles from his own parish in Swan Hill; the distance meant that the gossip from one town did not necessarily reach another.

Asked about his next appointment as assistant priest at St. Alipius, Ballarat East, he said he had heard unspecified reports of harsh discipline being inflicted on children at a local Catholic school and possible other infractions of a sexual nature by Brother Edward Dowlan.

The schools connected to the parish were run by the Christian Brothers, several of whom would later be convicted of numerous sexual offenses against children. Cardinal Pell told the commission he had discussed the matter with the school chaplain, who assured him the Brothers were aware and dealing with the matter. Brother Dowlan left the school shortly thereafter.

Another priest resident at the St. Alipius presbytery during the period in question was Father Gerald Ridsdale, who has been in prison since 1994 for these crimes and has been liaicized. Cardinal Pell told the commission that the way Ridsdale was dealt with by Bishop Ronald Mulkearns — who gave testimony via video link from a nursing home where he is receiving palliative care for cancer — was a “catastrophe” for the victims and the church.

“If effective action had been taken earlier, an enormous amount of suffering would have been avoided,” the cardinal said.

The hearing adjourned shortly after the questions about Ridsdale began, but Cardinal Pell’s relationship with and knowledge of the offenses committed by Ridsdale are expected to be the focus of more analysis in the coming days.

NEXT: ‘Spotlight’ is not anti-Catholic, Vatican newspaper says