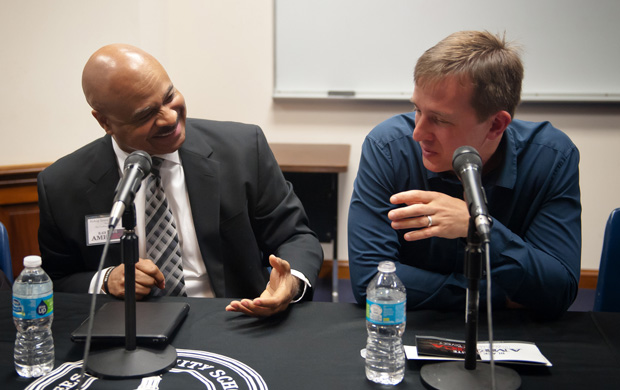 Bishop James Lowe of Guiding Light Church in Birmingham, Ala., and the Rev. Joel Brooks of Redeemer Community Church in Avondale, Ala., converse during a March 3 panel discussion at the "Black & White in America: How Deep the Divide?" conference at Samford University in Birmingham. (CNS photo/Mary D. Dillard, One Voice)

BIRMINGHAM, Ala. (CNS) — Religious leaders, civic leaders and community members came together March 3-4 for a conference on “Black & White in America: How Deep the Divide?” in Birmingham.

Held at Beeson Divinity School at Samford University, the conference addressed the need for racial reconciliation in the United States and the path to that reconciliation.

Last year, Bishop Robert J. Baker of Birmingham approached Birmingham Mayor William Bell and the Rev. Timothy George, dean of Beeson Divinity School, with concerns over recent racial turmoil. The three decided to co-chair a conference, which would be used as a much needed avenue to dialogue and harmony.

In a letter to conference attendees, the three co-chairs wrote, “This reflection/conversation on race relations in the United States among its African-American and white citizens is our humble effort to foster light and hope where darkness and despair may prevail.”

Bell began the conference with a reflection on his city’s civil rights history. As a young boy he experienced segregation first-hand, but noted it was “just the way it was” until people “became aware of their limitations and began to ask questions.” He expressed his belief that civil rights, in essence, equates to human rights, for African-Americans “just wanted to be treated like human beings.”

“Discrimination comes about by lack of knowledge of others,” he continued. All too often people put up false barriers “that keep us from knowing each other.” However, the mayor said change can come when “good men and women stand up” and demand humanity be seen in each other. 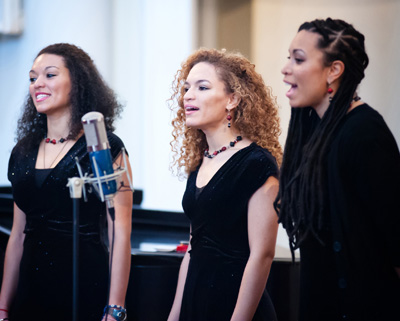 A biracial group of singers performs March 3 during the “Black & White in America: How Deep the Divide?” conference at Samford University in Birmingham, Ala. (CNS photo/Mary D. Dillard, One Voice)

When speaking of youth, Bell noted that taking religion and prayer out of the classroom has resulted in a loss of a moral compass, for it is the moral compass that helps us fulfill our daily obligation to “renew hearts.”

He concluded, “We live on an edge where any little thing can lead to racial disharmony.”

The next speaker, retired Mayor Joseph Riley of Charleston, South Carolina, knows all too well of this edge. Riley oversaw the response to the Emanuel Nine shooting when a “hateful bigot wanted to start a race war, but his seeds of war fell on rocky soil.”

A mass shooting took place at the Emanuel African Methodist Episcopal Church in downtown Charleston the evening of June 17 last year. During a prayer service, nine people were killed by a gunman, later identified as 21-year-old Dylann Roof, who later confessed that he committed the shooting in hopes of igniting a race war. Roof is white; those killed were African-American.

Riley, a Catholic and a son of the South, lives by the motto “Live every day as if it were your last.” This mindset led Riley to build bridges between the communities within Charleston. Sometimes referred to as “Little Black Joe” because of his zealous efforts to bridge the gap between whites and blacks, he persevered with various programs and initiatives. The bridges built by Riley helped the community respond to hate with love. It was the love for one another that helped the city deal with the grief without turmoil. The relationship between whites and blacks, Riley stated, is something “we can’t put to bed.” We must continue to “enhance and reinforce” our relationships.

Alabama Attorney General Luther Strange, raised in Alabama, first realized that need to foster and enhance relationships as a youth playing basketball. He told conference attendees he played high school basketball on a team, which, at the time, was rare with three blacks and two whites. At first, they competed among themselves, but then realized the need to work together.

In Strange’s response to Bell and Riley, he noted that leadership makes all the difference as seen in Charleston. Strange also reiterated Bell’s belief that religion is a key ingredient to preventing violence.

“I believe love will never fail in the Christian community as we face the racial divide if we are willing to pray, to listen, to learn, to think and to act,” Bishop Edward Braxton.

Following the attorney general, a panel discussion on the role of civil leadership was held.

During the discussion, Lee was asked, “Where do we go from here?” She quickly replied, “We need to teach our children about our history, because if they don’t know the history, then they are prone to repeat it. We need to become more civically involved. When we see racism, don’t be afraid to speak out. We need to help one another regardless of the color of your skin … until there is a plaque on the civil rights statue that says, ‘Until we learn to see each other through the eyes of God, we will never see each other without fear or prejudice.'”

The second session of the first day began with Bishop Edward K. Braxton of Belleville, Illinois, revisiting his pastoral letter “The Racial Divide in the United States: A Reflection for the World Day of Peace 2015.”

Bishop Braxton said, “The cost of true discipleship calls us to reject cheap grace … God’s redeeming grace requires our obedience to His law of love and our concrete actions on behalf of others. St. Paul to the Christians living in Corinth tells us, ‘Love never fails.’ I believe love will never fail in the Christian community as we face the racial divide if we are willing to pray, to listen, to learn, to think and to act.”

The next speaker was professor Wayne Flynt, who talked about Harper Lee, lawyer Atticus Finch in her book “To Kill a Mockingbird” and the lessons of innocence, sin, judgement, forgiveness and reconciliation.

Flynt said, “As Ecclesiastes make clear, there is a time to speak and a time to be silent. White evangelicals achieved a PhD in the art of silence. We didn’t do so well. We didn’t speak up. Our tongues got buried in our cheeks. We could have waited a year, 10 years, or a hundred years, and justice would not have flown down like a river until African-Americans made it happen.”

The Rev. Carolyn Maull McKinstry concluded the first day. Rev. McKinstry was present at the Sixteenth Street Baptist Church in Birmingham when it was bombed in 1963, killing four young girls. She said we must be “reconciled to God and to each other” for reconciliation to truly happen.

“Reconciliation can’t be separated from religion. The God who loves you, loves me. There is no partiality with God,” she said.

In turn, our love for God must be shown “vertically and horizontally,” meaning in order to truly love God we must also love our neighbor as we love God. She emphasized that the “racial issue left unchecked and ignored will destroy our country.”

Dillard is on the staff of One Voice, newspaper of the Diocese of Birmingham.

NEXT: Catholic Extension features ‘nuns who rock’ on website, in social media