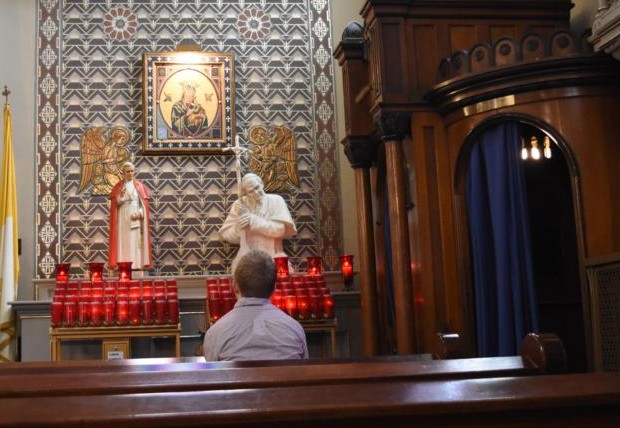 DETROIT (CNS) — When Father Benjamin Kosnac decided to start offering confessions 30 minutes before every Mass, he wasn’t sure anyone would come.

But try walking into the chapel at SS. Cyril & Methodius Church in Sterling Heights on any given weekend now, and you won’t find a seat that isn’t taken. Despite the efforts of Father Kosnac and two or three other priests, who are tucked away in confessionals churning through as many penitents as possible before the bells announce the start of Mass, the lines just don’t seem to get any shorter.

It’s not that SS. Cyril & Methodius has an inordinate amount of sinners. It’s the lessons of Kevin Costner’s “Field of Dreams” in action: “If you build it, they will come.”

“It works very well. It’s very practical,” Father Kosnac told The Michigan Catholic, Detroit’s archdiocesan newspaper. “If you go to a holy Mass and you want to receive (the Eucharist) and you know there is a sin that prevents you from receiving holy Communion, we make it available before holy Mass so the person actually can receive.”

Father Kosnac has been offering daily confessions for 18 years at his parish, and during that time he has seen a steady growth of parishioners and non-parishioners alike seeking the sacrament.

“What I realized was that sometimes the Saturday afternoon time is the worst possible time for them to come and break away from what they are doing. I’m just making it available when they are here,” Father Kosnac said. “It’s a certain pastoral approach: Why make two trips?”

In fact, with many statistics showing the number of Catholics frequenting the sacrament is down overall — consistent with trends showing declines in other aspects of sacramental participation, including marriages and baptisms — it might seem counterintuitive to offer more options for confession. But for some parishes, it’s been a way to encourage more people to return to the sacrament.

“I’m usually in the confessional for an hour to an hour and a half, and for some of the folks it might include a brief spiritual direction as well as confession,” said Father Zukowski, pastor of St. Martin de Porres. “So I find that the Wednesday evening time is very convenient for them.”

In fact, apart from the spiritual benefits, a 2014 survey of the faithful in the Archdiocese of Detroit showed 40 percent of active Catholics rated opportunities for confession as “very important” to their choice of a parish. But perhaps more stunningly, it was the most important characteristic for one of the most coveted age groups: teens and college-age adults.

It’s a finding that doesn’t surprise Chris Gawel, young adult and campus ministry coordinator for the Archdiocese of Detroit.

“Pretty much at every young adult event, we try to make confession available,” Gawel said. “Some parishes have now instituted confession before Mass — the Newman Center is doing that now — because that’s the biggest ‘bang for the buck’ that they can get.”

If young people can attend Mass, go to confession and stick around for fellowship afterward, they’ll attend more frequently, Gawel contends, because their schedules often don’t allow them to break away on multiple days.

“Young people want a Catholic identity. So the things that separate them from other Christians, they’re going to want to participate in. It’s not just confession, it’s also Eucharistic adoration,” Gawel said. “If they can get it all in one fell swoop, they’ll take advantage of it.”

Father Zukowski pointed to the archdiocese’s “Unleash the Gospel” initiative and the Year of Mercy as opportunities to emphasize the benefits of sacramental confession.

On March 4-5, several parishes hosted all-day confession and adoration services called “24 Hours for the Lord,” an initiative of Pope Francis for the Year of Mercy; many other churches are hosting vicariate-wide penance services during Lent.

The call that Detroit Archbishop Allen H. Vigneron “has given us to ‘unleash the Gospel’ has to start in our own heart,” Father Zukowski said. “The comparison was made to the GPS system where you have to recalculate. As a priest I find the greatest satisfaction besides celebrating the eucharistic liturgy is being able to reconcile people back to the Lord.”

It isn’t just young people who are increasingly looking toward confession; working professionals, too, can often benefit from a listening ear on a tight schedule.

“For me, confession is a main part of my life,” said Stephen Joseph, who works for General Motors in downtown Detroit. “I try to go to confession at least every two weeks. I want to do it every week, but it’s kind of hard to get to confession around here.”

St. Bonaventure Monastery in the city has a Capuchin friar available Monday through Saturday every hour, on the hour, from 10 a.m.-4 p.m., with the exception of a break at 1 p.m. for lunch. Old St. Mary’s Church in downtown Detroit’s Greektown offers confession 20 minutes before its 12:15 p.m. daily Mass.

When all else fails, in addition to offering set confession times, most pastors also invite parishioners to schedule private confessional appointments by calling. Father Zukowski said whatever the circumstances, a priest’s door is always open for his flock — even during “off hours” — and no one should feel intimidated by calling and asking for a confession.

“I think most priests are very generous in offering their time and energy,” Father Zukowski said. “This is why we were ordained, to celebrate those precious sacraments of Eucharist and reconciliation and anointing of the sick.”