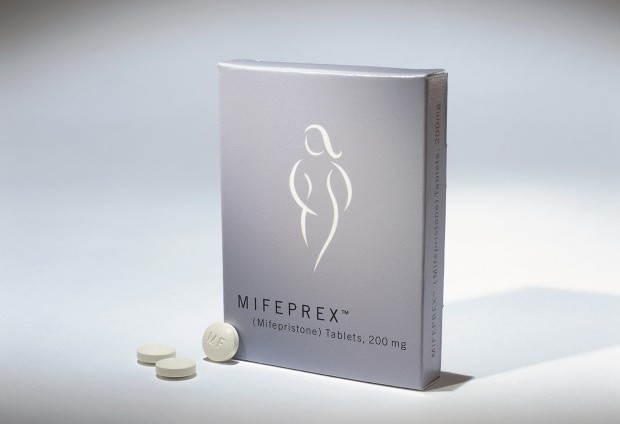 A box of the RU-486 drug, known generically as mifepristone and by its brand name Mifeprex, is seen in an undated handout photo. (CNS photo from Danco Laboratories)

The new rules, announced March 30, allow a woman to use RU-486 — known generically as mifepristone and by its brand name Mifeprex — later into pregnancy and with fewer visits to a doctor.

“The unofficial, off-label use of RU-486 is now the new normal, paving the way for the destruction of even more innocent lives, and putting women and girls at risk for all the life-changing effects of abortion,” he said in an April 1 statement.

“Far from wanting abortion to be ‘rare’, abortion advocates are celebrating this expanded use as opening an ever-widening door to abortion,” he said. “They are equally celebrating the FDA’s neglect of women’s health. Women have died from this drug, and many who used it after eight weeks of pregnancy ended up returning for surgical abortions. This anguish, too, will now be visited on more women.”

“People need to know this is a very, very serious expansion of the use of RU-486,” Deirdre McQuade, spokeswoman for the U.S. Conference of Catholic Bishops’ Secretariat for Pro Life Activities, told Catholic News Service March 31.

“Clearly the loosening of the FDA guidelines puts more women, girls and unborn children at risk,” McQuade said, while expressing concern that women and girls will be faced with the possibility of delivering a “recognizably human child” at home with no one in attendance.

“Women panic. They don’t know what to do. Who’s there for them to care for them?” she said.

McQuade also expressed concern that the new guidelines allow non-physicians to dispense or prescribe the drug. “This raises a huge question. Do we want nurses, physician’s assistants, non-MDs overseeing the prescription of a drug that has very serious consequences for women?”

Dr. Grazie Pozo Christie, an advisory board member with the Catholic Association, in a March 31 statement called the extension of time that RU-486 can be used “substantial.” She said women “will feel the deplorable effects of this change” when they will return home “to endure a painful and shocking process by themselves and of course their babies.”

Christie, a radiologist who said she performs fetal ultrasound daily, explained that a 10-week-old fetus is “a well-developed and recognizably human creature. Head, hands, feet and vigorous movement are evident even to the untrained eye.”

“Also at issue is the psychological and physical impact on a woman, sent home to experience the very painful cramps of a chemical abortion of a fetus that size,” she added. “Besides the considerable blood loss and pain, there is every chance of a woman recognizing a fully formed fetus amongst the expelled ‘products of conception.'”

Randall K. O’Bannon, director of education and research at National Right to Life, said in a statement March 30 that the new guidelines do not make chemical abortion safer.

“In the end, it is obvious that the FDA’s new protocol serves only the interest of the abortion industry by expanding their base of potential customers, increasing their profit margin and reducing the level of staff and amount of resources they have to devote to the patient,” O’Bannon said.

He added that while the announcement was welcomed by some, documents detailing the impact on women’s safety has been released.

“Certainly, none of the modifications is of any benefit to the unborn child,” O’Bannon said.

The new FDA guidelines for RU-486 brings the regimen for taking the drug in line with what has become standard medical practice:

— Extending the period when a woman can take the drug to 70 days of pregnancy from 49 days.

— Reducing the number of visits to a doctor by a woman to two from three.

RU-486 is used with another drug called misoprostol, a prostaglandin, to induce a chemical abortion by blocking the hormone progesterone needed to sustain a pregnancy. The FDA said it changed the guidelines governing RU-486 “based on data and information submitted by the drug manufacturer.”

Some abortion opponents said the announcement was politically motivated in the midst of presidential and congressional elections as Republican and Democrat candidates seek support from women.

The FDA said in the announcement that its decision was based on medical science.

“After reviewing the supplemental application, the agency determined that Mifeprex is safe and effective when used to terminate a pregnancy in accordance with the revised labeling,” the agency said.

Dr. Mark S. DeFranceso, president of the American Congress of Obstetricians and Gynecologists, welcomed the new regimen in a statement, saying it “reflects the current available scientific evidence and best practices and includes many of the recommendations that ACOG had presented to the agency. Extending approved use of mifepristone through 70 days of gestation is proven to be safe and effective, and will give women more time to make the decision that is right for them.”

The new guidelines run contrary to laws in some states that require doctors to follow more stringent FDA regulations regarding RU-486 use that were adopted in 2000. Supporters of legal abortion in North Dakota, Ohio, Texas and elsewhere have challenged the laws in court.

In response to a court order putting a law similar to those in Texas and Ohio on hold, Arizona legislators recently sent a bill to Gov. Doug Ducey requiring abortion-inducing medications to be administered according to FDA protocol that was in effect as of Dec. 31.

In his statement, Cardinal Dolan offered the Catholic Church’s assistance to “any woman who finds herself pregnant” and needs help. He invited women to “come to Catholic agencies for nonjudgmental, caring assistance. Catholic Charities, pregnancy help centers, and many parishes stand at the ready to assist those in need.”

PREVIOUS: Catholic’s ministry is to spread the Divine Mercy’s message of salvation

NEXT: Easter message of hope ‘a gift to carry forth,’ Obama says