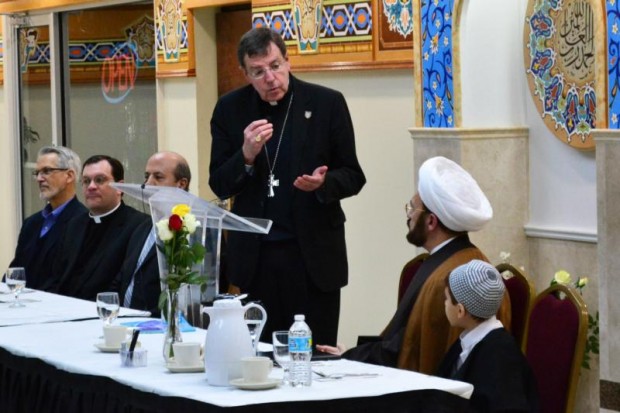 The archbishop’s visit to the Islamic House of Wisdom came at the invitation of Imam Mohammad Ali Elahi, who also spoke to the gathering of about 60 people, including members of the secular media.

Imam Elahi spoke for about 20 minutes about the dangers presented by the Islamic State and other terrorist groups in the Middle East and across the globe, saying such radical violence harms Christians, Muslims and Jews alike. The imam also decried overgeneralizations and anti-Islamic rhetoric, noting many Muslim groups have stood in unity against terrorism.

“They are abusing the ignorant,” Imam Elahi said of groups such as the Islamic State and Boko Haram. “They are brainwashing people who have been suffering from poverty, dictatorship, injustice and oppression. They are fooling them, deceiving them and using them as puppets for their own political purposes. We have to be aware that they have nothing to do with Islam.”

The imam noted that he had been the victim of threats from groups such as the Ku Klux Klan, telling him to “depart (the U.S.) or die.”

“I’ve been against ISIS and all this terrorism from day one,” Imam Elahi said. “If they cannot tolerate me, you can imagine the worst tolerance of the real radicals.”

Archbishop Vigneron, addressing those gathered, thanked the imam for his “clear rejection of every form of unfounded radicalism,” as well as the imam’s words of appreciation for the Christian and Jewish faiths.

“For myself as the principal pastor of the Catholic Church here in southeast Michigan, I want to express to Imam Elahi my deep thanks for the words of appreciation for whom I serve and have dedicated my life, the Lord Jesus,” the archbishop said, referencing the imam’s message that even in Islam, Jesus is a highly revered figure.

The luncheon was one of several efforts that have put the Archdiocese of Detroit at the forefront of interreligious dialogue in the United States in recent years. Archbishop Vigneron has also taken part in interfaith gatherings with local rabbis, and in October 2015 the archdiocese hosted a celebration with Muslims and Jews of the 50th anniversary of the Second Vatican Council’s landmark declaration on relations with non-Christian religions, “Nostra Aetate.”

In addition, Archbishop Vigneron has been instrumental in helping coordinate the Interfaith Leadership Council of Metropolitan Detroit and in promoting efforts to work together with Jews and Muslims toward common goals.

Archbishop Vigneron noted that interreligious dialogue is essential in working toward the common good, including promoting peace in the U.S. and abroad. Such dialogue does not require either party to “level out or bleach away our differences,” he said, but “it is always important that we do this on the basis of clear convictions regarding our own faiths.”

In particular, the archbishop said, Christians and Muslims share common beliefs about God’s role in creation and his ordering of the world for the good of men and women.

Modern threats to religious liberty can be a cause for members of all faiths to cooperate, he said, in order to ensure no one’s rights are infringed.

In 2011, Archbishop Vigneron was honored by the Council of Islamic Organizations of Michigan with its Interfaith Partner Award for the archbishop’s initiative in reaching out to local Muslim communities. In 2013, he was honored again for his part in helping start the Religious Leaders Forum, a group of leaders of various faiths that meets regularly to discuss matters of common concern.