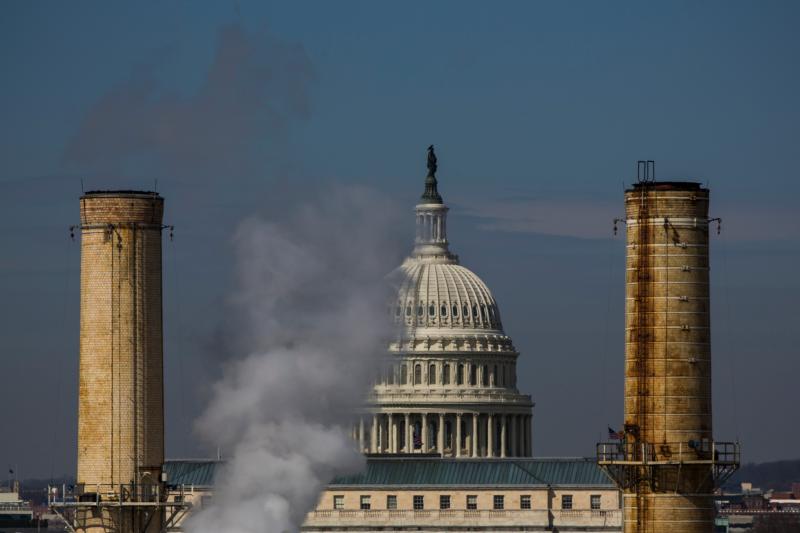 The dome of the U.S. Capitol is seen behind the smokestacks of the only coal-burning power plant in Washington in this March 10, 2014, file photo. (CNS photo/Jim Lo Scalzo, EPA)

WASHINGTON (CNS) — Citing a moral obligation to care for the natural world and all inhabitants of the earth, 30 Catholic and faith-based institutions filed an amicus brief with a federal appeals court in support of the Clean Power Plan.

The brief argues that the Environmental Protection Agency has the duty to protect human health from harmful pollution in ways outlined in the plan, which establishes federal limits on carbon emissions from coal-fired power plants.

The brief said evidence of the human cause of climate change is “undeniable.”

“We face a moral imperative to protect the earth and all its inhabitants from a climate crisis of our own making,” the brief said.

The document called the rule “a compromise position” and said the EPA could have demanded “greater and earlier reductions.”

The filers “support EPA’s diligent effort and agree that the rule is an essential part of fulfilling our collective obligation to curtail climate change,” the brief said. “It is an important step, but it is hardly the radical leap that petitioners portray. In fact, the court should recognize that there is a valid argument to be made that the urgency of the problem demands more aggressive action.”

The filing came April 1 in the case of West Virginia, et al., v. U.S. Environmental Protection Agency in the U.S. Court of Appeals for the District of Columbia Circuit. Oral arguments in the case are scheduled for June 2 in front of a three-judge panel.

The regulation gives states broad authority in determining how to reduce power plant greenhouse gas emissions by 32 percent from 2005 levels by 2030.

The emission reduction plan has been challenged in court by 27 states and the coal and power industry, all of whom argue that the EPA plan goes beyond the authority granted in the Clean Air Act.

Lonnie Ellis, associate director of the Catholic Climate Covenant, the lead filer of the brief, told Catholic News Service that the EPA plan is a vital step to slowing climate change.

“After ‘Laudato Si” and after the papal visit to the White House, where Pope Francis praised this specific effort to address climate change, we felt we needed to speak up,” Ellis said.

“This is such a large and urgent problem that we absolutely need to start taking action. We have a moral obligation to the people around the world.”

Ellis pointed to the efforts already underway in states supporting and opposing the plan to implement regulations that would limit greenhouse gas emissions, which point to the importance of the EPA rule.

Joining the brief were Catholic Rural Life, nine orders of women religious and the dioceses of Des Moines, Iowa, Davenport, Iowa, and Stockton, California, where church leaders have taken action to reduce fossil fuel usage and promoted the installation of alternative energy systems at parish facilities. Other institutions in the effort include Fordham University, University of San Francisco, University of San Diego, College of the Holy Cross, National Council of Churches USA, Coalition on the Environment and Jewish Life, and National Baptist Convention of America.

Archbishop Thomas G. Wenski of Miami, chairman of the U.S. bishops’ Committee on Domestic Justice and Human Development, welcomed the plan when it was introduced in August. He called it “an important step forward to protect the health of all people, especially children, the elderly and poor and vulnerable communities, from harmful pollution and the impacts of climate change.”

While the U.S. Conference of Catholic Bishops is a member of the Catholic Climate Covenant, it is not among the filers of the brief because it limits its legal involvement to U.S. Supreme Court cases.

In addition, 18 state attorneys general, the District of Columbia, National League of Cities, U.S. Conference of Mayors, more than 50 local governments, 200 current and former members of Congress and tech companies Amazon, Google, Apple and Microsoft are among the entities that have filed amicus briefs in support of the rules.

PREVIOUS: Homily: ‘God was full of surprises when it came to Mother Angelica’

NEXT: Project aims to provide education on church teaching on end-of-life care