Homily: ‘God was full of surprises when it came to Mother Angelica’ 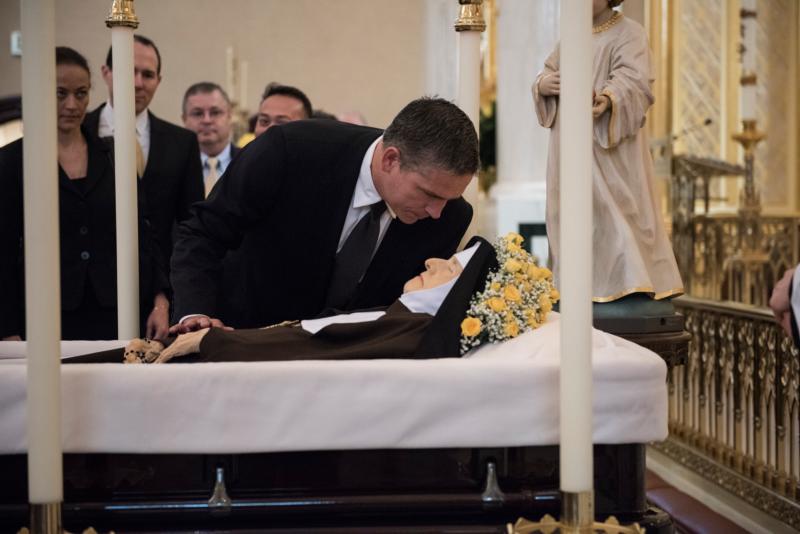 Actor Jim Caviezel pays his respects at the casket of Mother Angelica before her April 1 funeral Mass at the the Shrine of the Most Blessed Sacrament in Hanceville, Ala. (CNS photo/Jeffrey Bruno, EWTN) 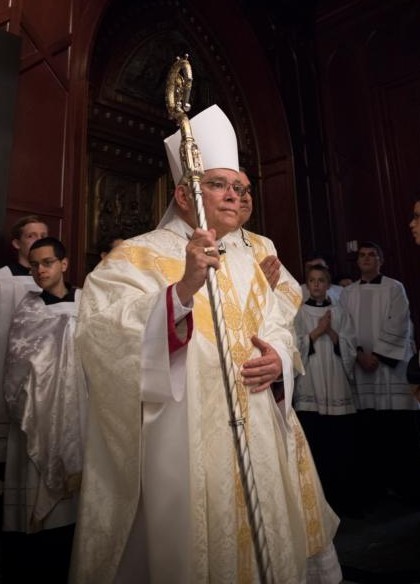 Archbishop Charles J. Chaput of Philadelphia processes out of the Shrine of the Most Blessed Sacrament in Hanceville, Ala., April 1 after celebrating the funeral Mass for Mother Angelica. (CNS photo/Jeffrey Bruno, EWTN)

HANCEVILLE, Ala. (CNS) — With Mother Angelica having been essentially bedridden for 15 years following a series of strokes in 2001, staff at the Eternal Word Television Network and members of her order, the Poor Clares of Perpetual Adoration, had plenty of time to plan and prepare for her funeral.

“We at EWTN had many plans for when this day would come,” said Father Joseph Wolfe of the Franciscan Missionaries of the Eternal Word in his homily at the April 1 funeral Mass. “But God was full of surprises when it came to Mother Angelica.”

One surprise: Because Mother Angelica, 92, died March 27, Easter Sunday, some revisions had to be made as church law prohibits reading from the Office of the Dead during the Easter octave.

The first reading for the funeral Mass, celebrated at the Shrine of the Most Blessed Sacrament in Hanceville, also had to be changed. Selected to take its place was a passage from the Book of Revelation, where St. John said he “saw a new heaven and a new earth.”

Father Wolfe also told of the time that a teenage Rita Rizzo suffered from a stomach ailment that lasted nearly four years. He said that she had recalled of those events, “When the Lord came in and healed me, through the Little Flower (St. Therese of Lisieux), I had a whole different attitude. I knew there was a God. I knew that God loved me and was interested in me. I didn’t know that before. … All I wanted to do after my healing was give myself to Jesus.” In a letter, Mother Angelica had said, “Before I was cured I was a lukewarm Catholic. … When I think of all that he has done for me and how little I have done for him, I could cry.”

Some would argue that in her life, Mother Angelica did much: founding EWTN, branching out into radio, shortwave and print, and establishing a monastery in Alabama, which is thinly populated with Catholics.

Father Wolfe also told of Mother Angelica’s solemn profession as a religious: “The bishop, I think, was late, he rushed through the ceremony, he put the ring on her finger just about halfway. But there was something deeper going on inside of her.” He added, “We’re trying to make up for that lack of ceremony today” during the two-hour invitation-only Mass that had other mourners on the piazza outside the church. The funeral was shown live on EWTN.

“Hers was a practical spirituality for the man in the pew,” Father Wolfe said. I believe that deep down we all want holiness because it is the only thing that is really satisfies us. The saints are those who reached their potential.”

The priest also read a recollection from the Poor Clares of Perpetual Adoration’s mother vicar, Sister Mary Michael. “Being a spiritual daughter of Mother Angelica has been a unique privileged experience. Mother had a wealth of spiritual knowledge,” she said.

“Problems and challenges did not discourage Mother,” Father Wolfe said. “No pity parties allowed. If one door closes, go through another, following the leading of Our Lord, and be one with it. What seemed to be setbacks often turned out to be an opening for something bigger and better.”

He added, “Mother was not afraid to do what seemed ridiculous. Her only fear was not to do God’s work.”

The Mass was celebrated by Archbishop Charles J. Chaput of Philadelphia, vice chairman of the EWTN board and its longest-serving current member. Other bishops present included Archbishop Carlo Maria Vigano, the Vatican nuncio to the United States; Bishop Robert J. Baker of Birmingham and his predecessor, retired Bishop David E. Foley; and Bishop Thomas J. Olmsted of Phoenix.

After the funeral, a private committal service took place at Our Lady of the Angels Monastery, the Poor Clares of Perpetual Adoration’s motherhouse. Mother Angelica was to be interred in a crypt at the monastery.