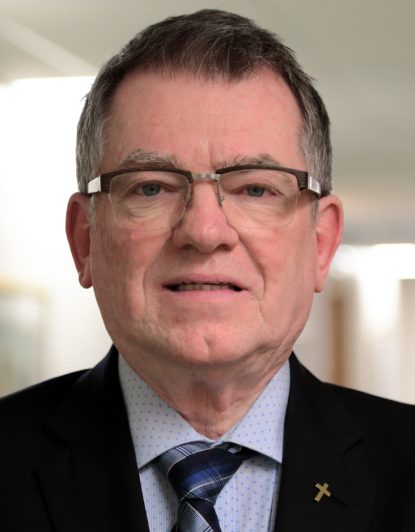 Father Marc Pelchat, vicar general of the Archdiocese of Quebec, says that parishes must continue to evolve in order to survive. (CNS photo/Philippe Vaillancourt, Presence)

QUEBEC CITY (CNS) — Catholic parishes in Quebec province have undergone transformation in recent years as most of them were merged into new entities. But perhaps the biggest challenge lies ahead as the Catholic Church promotes what it calls a “missionary turning point.”

The so-called turning point is detailed in a 30-page document published by the Assembly of Quebec Catholic Bishops in January in which it is presented as the ultimate finality of the ongoing parish reorganizations.

For the assembly, the challenge far exceeds the closure and merging of parishes and selling of churches that have been occurring for many years. It is seen more as a spiritual challenge that demands church structures to be themselves converted.

“It’s not about creating, next to our ongoing programs and activities, a missionary component aimed at those who don’t know Christ. It’s about converting all of our pastoral activities to make them missionary,” says the document.

It also asks Catholics to ponder if the parish reorganizations really are missionary in nature or if they are just meant to preserve a status quo and save money.

Father Marc Pelchat, vicar general of the Archdiocese of Quebec, explained that the turnaround rests on two main ideas: elaborating within each local community a pastoral evangelization project and making sure the project is managed by the baptized themselves.

Parish reorganizations should not be done simply to compensate for the declining number of priests because it is a process in which everyone must participate, Father Pelchat said.

“Parish reorganization should rekindle an evangelization project, to go toward groups and people with whom we have no contact,” he explained. “For that, we need a conversion of our organization, but also of our pastoral vision, our mentality, and our means of action. We mustn’t get entangled in our structures, we need to free some time.”

In upcoming years, church leaders will not only ask parishioners to accept major structural changes in the parishes they have always known, but they also will ask them to get more involved in the church’s spiritual mission.

The process already is underway in some Quebec dioceses, such as the Diocese of Trois-Rivieres, halfway between Montreal and Quebec City.

“So far, the local reaction is great. We’re, of course, well aware that this process leaves some people wary and worried,” said Jasmine Johnson, diocesan director of communications. “But we’re all in this together. We’re implementing this project in close partnership with the grassroots communities.”

The diocese is completing the early stages of implementing the missionary turnaround. Diocesan leaders have met the members of the base communities, discussing the mission of the church and the responsibilities of the baptized members themselves. Diocesan officers and local leaders, called “peers,” regularly meet to discuss church leadership, faith education and the quest for meaning. About 130 of these peers have met so far and they return to share what they have learned in discussions with their local communities.

Trois-Rivieres has only a dozen active priests, Johnson said, adding that there’s no indication that these figures may change anytime soon. Yet, she says, parishioners must avoid thinking that adopting a missionary attitude is a strategy to respond to the lack of priests.

“We want to be close and supportive of our local faith communities. Yet, we’re so stuck-up and worried about the future of our church buildings that we’re running out of money to properly do that kind of community outreach,” Johnson said.

The next step of the missionary turnaround will address human and financial resources, as well as the future of church properties. Some parishes and local communities must face difficult decisions, which may involve the closure of some churches.

“I’m fully convinced that our people will be able to weigh in the alternatives,” Johnson said. “We’re, of course, well aware that some people won’t be happy by some of the decisions that will be taken. Some parishes will quickly take the missionary turnaround; others will have to be accompanied all the way through. Yet, it must not be a top-down process. The decisions must come from the grass-roots communities themselves. That’s the whole idea of the process.”

Further east along the St. Laurence River, the Diocese of St. Anne de la Pocatiere also is on track for such a missionary turnaround. The diocese had 200 priests in 1976; however, it has ordained just eight priests in the last 40 years. Father Simon-Pierre Pelletier, the diocese’s vicar general, said it would be irresponsible to let the 26 remaining priests maintain the status quo.

“What’s at stake right now is the inevitable death of an age-old model of the church. Nobody loves to see something agonize and die,” Father Pelletier said.

He expressed confidence that the diocese will eventually succeed in its parish reorganization plan. In a few years he expects that a diocesan missionary team will likely go to local parish communities supported by lay people.

Taking a step aside to contemplate the ongoing process in the aforementioned dioceses, Father Pelchat remains confident yet cautious about the missionary turnaround because some communities may not be able to go through the entire process.

“The missionary turnaround will most likely be a partial success,” he said. “Some local faith communities will probably vanish. The remaining Christians will gather together differently. The idea of the parish isn’t called into question, but its structure has already changed. It must change. And it will change again.”

NEXT: Pope invites Christians to pray for children in Syria on June 1