Ali known not just for prowess in ring but also for faith, generosity 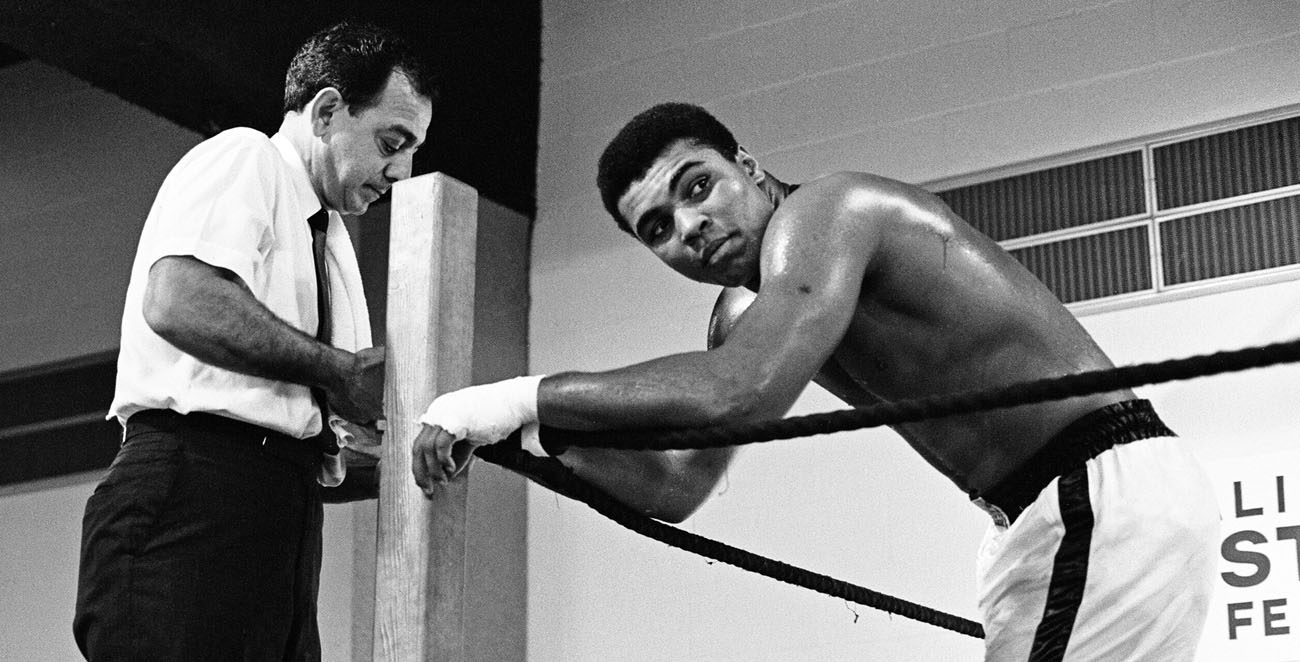 Boxing legend Muhammad Ali is seen in a 1967 photo with his trainer Angelo Dundee ahead of his fight with Ernie Terrell at the Astrodome in Houston. Ali died June 3 at age 74 after a long battle with Parkinson's disease. (CNS photo/Action Images, MSI via Reuters)

PHOENIX (CNS) — Muhammad Ali leaves an indelible mark on the world not only as a fighter and athlete but as a man of faith, courage and generosity.

The three-time heavyweight champion and self-titled “The Greatest” boxer of all time died at a Scottsdale hospital June 3. He was 74.

In Phoenix, where Ali lived his last years, people recalled his kindness and bravery in his struggle with Parkinson’s disease.

“I’ve watched him face the disease with grace and humor, and he has inspired countless patients to do the same,” said Dr. Holly Shill in a statement from the Muhammad Ali Parkinson Center at Barrow Neurological Institute. “We have lost a great warrior in the battle of Parkinson’s, but hope continues.”

Founded in 1997 by Ali and his wife, Lonnie (Yolanda), along with philanthropist Jimmy Walker and Dr. Abraham Lieberman, the Muhammad Ali Parkinson Center offers advanced treatments for Parkinson’s and other movement disorders as well as therapy and support for patients and caretakers. It is part of St. Joseph’s Hospital and Medical Center in the Sisters of Mercy-founded Dignity Health network.

Patient Ida Stanford reflected on the center and its famous namesake in a Dignity Health video.

“I can’t imagine having Parkinson’s and not having place like the center,” she said. “Muhammad Ali stood up for what he believed in. He was one-of-a-kind and still is one-of-a-kind.”

Parkinson’s disease is a chronic disorder that affects an estimated 1.5 million Americans. Its symptoms — tremors, slowness of movement, rigidity and impaired balance and coordination — worsen over time.

According to The Arizona Republic newspaper, the former champ came to the Phoenix area in the mid-1990s seeking medical treatment for his condition. He lived quietly in the valley devoting time to philanthropy and making occasional appearances at charity and sporting events.

Ali made several visits to the Society of St. Vincent de Paul’s family dining room in Phoenix, according to the society. He and his wife would serve meals and mingle with the guests. The couple also made several donations to the charity.

“It Mattered little that Muhammad lost his ability to speak, for he communicated to our guests through his heart and soul,” said executive director Steve Zabiliski in a letter to The Arizona Republic. “At St. Vincent de Paul, we will remember him for his grace, his kindness, his coruage and his love. It’s what made him so special.” 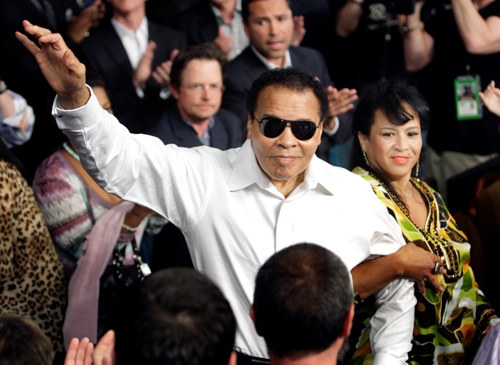 Boxing legend Muhammad Ali stands with his wife, Yolanda, as he is introduced before the 2010 welterweight fight between Floyd Mayweather Jr. and Shane Mosley at the MGM Grand Garden Arena in Las Vegas. (CNS photo/Steve Marcus, Reuters)

His last public appearance was in early April at Celebrity Fight Night, an annual Phoenix fundraiser that has given millions of dollars to the Ali Parkinson Center and other charities.

A public interfaith funeral service for Ali was to take place June 10 in Louisville, Kentucky.

Born and raised in Louisville, Ali came from a Christian household. His father was Methodist, his mother a Baptist. He was named Cassius Marcellus Clay Jr., a family name traced back to a white slave owner.

He started boxing at age 12.

In 1964, after grasping the heavyweight title from Sonny Liston, Cassius Clay announced that he had joined the Nation of Islam. He took a new name, Muhammad Ali.

In his 2004 memoir “The Soul of a Butterfly: Reflections on Life’s Journey,” Ali told the story of his “spiritual being.”

“It was after I retired from boxing that my true work began,” he wrote, observing that his religion and spirituality changed and evolved over years.

As a young man, he had questioned his Christian heritage and its portrayals of a white Jesus and white apostles. He said one thing that attracted him to Islam was that the faith had no images of God, angels or prophets.

“No single race should be able to identify with God through the color of its skin,” he wrote.

The Nation of Islam’s belief in black self-empowerment struck a chord with the boxer.

“When I became a Muslim, I was on my way to entering what I called ‘The Real Fight Ring,'” he said. “The one where freedom and justice for black people in America took place.”

In 1967, during the Vietnam War, Ali refused induction into the Army citing religious grounds.

“I didn’t agree with the reasons why we were in Vietnam in the first place,” he wrote in his memoir. “I couldn’t see myself trying to injure or kill people whom I didn’t even know, people who had never done any harm to me or my country.”

His dissent cost the boxer his heavyweight title. He was convicted of draft evasion. His passport was revoked, and his fighting career came to a halt.

Many Americans looked down on the fighter, and he said the Nation of Islam turned its back on him. He discovered a new “spiritual home” in mainstream Sunni Islam and embraced Sufism, a mystical dimension of the faith.

In 1982, Ali met Pope John Paul II at the Vatican. They reportedly exchanged autographs. Little did each know that they would later both suffer from Parkinson’s, serving as public faces of the disease.

A 2003 meeting with the Dalai Lama left a marked impression on Ali. He said they both held a deep respect for people of different beliefs and agreed that spirituality should be central to daily life.

Ali and wife Lonnie established the Muhammad Ali Center in his hometown of Louisville to promote the fighter’s legacy and his six core values: confidence, conviction, dedication, giving, respect and spirituality.

Although his connections to Catholicism may have been few, the quick-witted Ali once smacked back a question about his prowess in the ring with “Can I dance? Is the pope Catholic?”

In his 2004 book, Ali reflected on the afterlife and how he’d like to be remembered after death.

“What really matters in life is prayer, living right, and good deeds, because this life is just practice for our eternal life,” he wrote.

And on how he would like to be remembered: As the three-time heavyweight champion, as humorous, and as someone “who treated everyone right. … As a man who stood up for his beliefs no matter what. As a man who tried to unite all humankind through faith and love.”