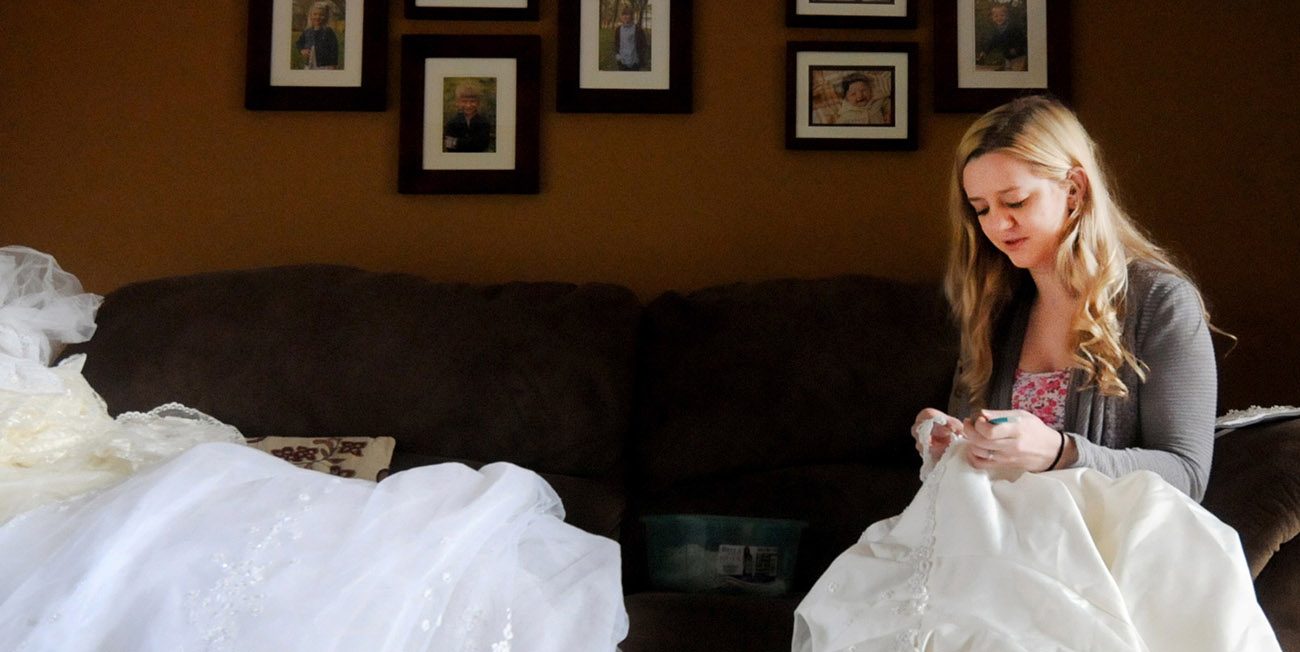 Sarah Novak does the delicate work of taking apart donated wedding dresses April 27 at her home in Rice, Minn., so the material can be reused to make garments to give families grieving the loss of a child. (CNS photo/Dianne Towalski, The Visitor)

Always her “little sidekick,” Novak said she picked up her grandma’s passion for sewing and honed her own skills which she uses today, altering bridal and formal wear at Rapids Alterations and Repair in Sauk Rapids.

What she didn’t imagine was that one day her talent would become a way to offer grieving families a little bit of comfort.

This spring, Novak heard about a cousin of her sister-in-law, Miranda Zulawski, who delivered a stillborn baby late in her pregnancy. Novak wanted to do something, anything, to help ease their family’s pain.

“When I first heard about Miranda’s cousin, I just felt this overwhelming need to help,” Novak said.

Zulawski likewise lost a daughter, Lacie, almost seven years ago, also in the later stage of her pregnancy at 31 weeks.

“I have always wanted to do something in memory of Lacie for others in a similar situation,” Zulawski said. “Sarah asked if she could make a burial gown (for my cousin) so I said we could start by using my wedding dress.”

Novak stitched a tiny satin dress from Zulawski’s wedding gown. Later that day, she posted a picture of it on Facebook with the message, “Today I worked on a project that was very difficult; not very difficult skills-wise but more on an emotional level. Today, I had to make a dress for an angel.”

“It was really hard to fight back the emotions when I was making it,” Novak told The Visitor, newspaper of the Diocese of St. Cloud. “I think one thing every parent looks forward to is dressing their baby, and in the hospital these parents know they won’t have that chance again. One way I can make a difference is to give them one thing they can keep or one memory that can make their experience a little bit better.”

When Novak, a member of Sts. Peter and Paul Parish in Gilman, told her co-worker, Lisa McCalla, about the dress, the two dreamed of how they could take this idea further.

“We started talking with each other on how losing a child at any age must be difficult, but how those who pass before they are born is almost a taboo conversation,” McCalla said.

“The mourning is much more personal for the immediate family, not so much as a community mourning or a celebration of a long life lived as some deaths are when the person is older,” McCalla said. “We decided we wanted to provide these families who have lost a baby something to hold on to if they wished or to have something to bury their baby in, since clothing small enough for these little angels is not something you can find in stores.”

“We decided if people were generous enough to donate their wedding gowns, we would use the material and spend our free time making the gowns to donate to local hospitals,” McCalla said.

“As many as one in four women experience miscarriage or infant loss,” McCaffrey said. “We have many mementos that we give to families when their baby has died. Families want to have anything their baby has touched. The dresses that these young women are making can be a great comfort for families who have lost a child.”

McCaffrey also expressed a need for something smaller than a gown for those who have had miscarriages earlier in their pregnancies. Novak and McCalla also make tiny “angel wraps” for those instances.

The gowns and wraps are intended for families to use to hold their babies, have them baptized, take pictures and if they choose, to keep as a memento or to dress their child in when they are laid to rest.

Anyone who has been through the loss of a child knows that there really isn’t anything anyone can say or do to “make it better,” Zulawski said. But she thinks it provides a special touch at a difficult time.

“There is nothing worse than planning your own child’s funeral let alone trying to pick out an outfit for them to wear,” she said. “I hope these beautiful angel gowns can ease their minds a little bit.”

Anderson is a multimedia reporter at The Visitor, newspaper of the Diocese of St. Cloud.

NEXT: Survey finds growing interest among Catholics in reading the Bible