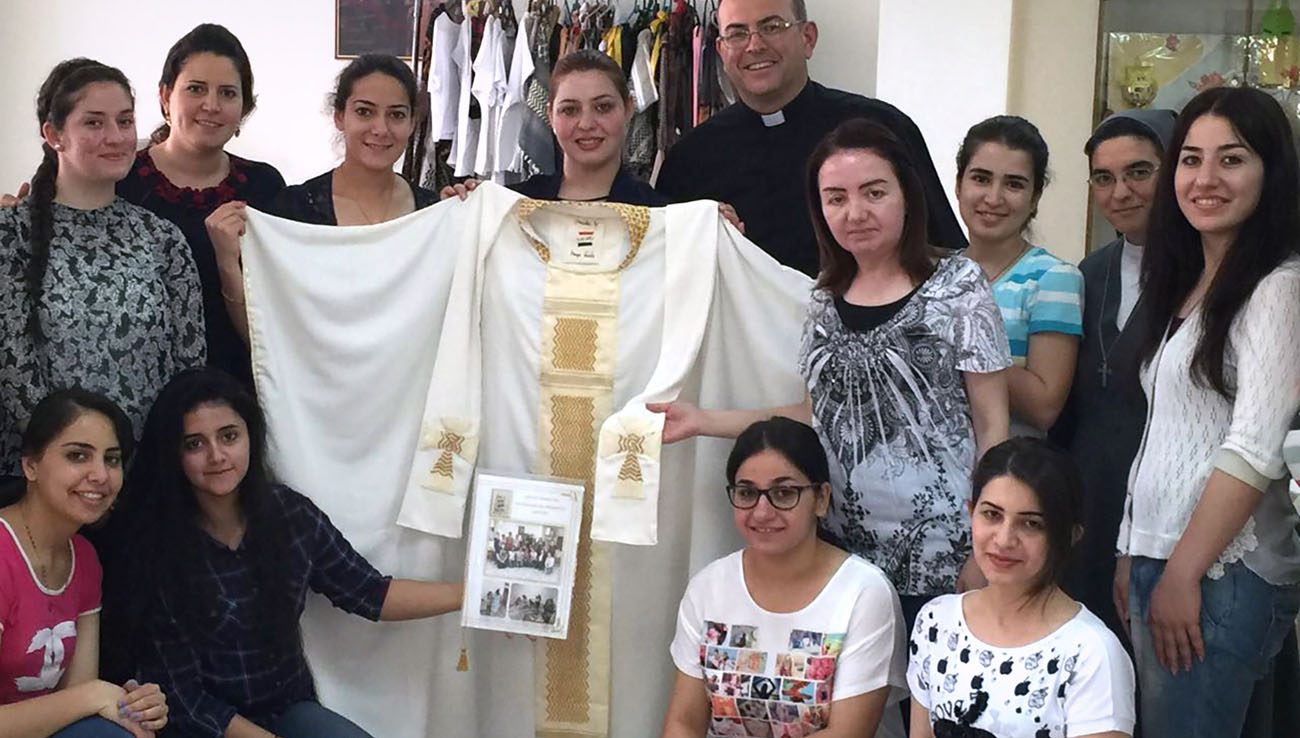 Iraqi refugee women who fled Islamic State group violence in their homeland pose for a photo in Amman, Jordan, in early June. The Chaldean Catholic women sent the hand-sewn mantle to Pope Francis and asked him to pray for them and for peace in their country. (CNS photo/courtesy Catholic Center for Studies and Media in Amman)

AMMAN, Jordan (CNS) — Iraqi refugee women who fled Islamic State group violence in their homeland have appealed to Pope Francis for help, sending a hand-sewn chasuble and imploring him to pray for them and for peace in their country.

The ivory colored chasuble with an oriental yellow-gold braid was designed and sewn by more than a dozen Chaldean Catholic women, who as refugees are unable to work in Jordan.

The papal chasuble and an accompanying letter were sent to the pontiff via diplomatic pouch from the apostolic nunciature in Amman, the Jordanian capital, in early June and was expected to arrive at the Vatican by mid-month.

“One of the most precious items is the vestment of a priest, bishop or pope serving at the altar during the most sacred of times, the Mass,” said Father Rifat Bader, director of the Catholic Center for Studies and Media in Amman.

“This has been made with hearts of love and with a special touch by refugees who suffered, forced to flee to maintain their Christian faith,” Father Bader told Catholic News Service. “The design uses the Arabic checkered ‘keffiyeh’ of the region, but made with yellow threads, resembling gold, the color of the Vatican.”

“Oh, Holy Father, we appeal to you to mention us in your prayers and to mention our country, Iraq, so that the Lord would reinstate peace there and in all the countries that seek peace, protect people from the evil and injustices prevailing in the world, and lead the sinners — who conduct evil deeds — into the right path in life. May the Lord touch their hearts with love and mercy,” said the refugees’ letter accompanying the chasuble.

“From this basis, we would like to present to you this chasuble in the hope that you would wear it when you celebrate Holy Mass and pray for us. It is a symbol of our love to you and a testimony of our appreciation for you,” said the letter made available to CNS.

The women wrote that they sewed the chasuble from the “remains of altar cloths,” explaining that they wanted to produce “something useful and beautiful to glorify the Lord from whatever is rejected and detested” by the militants.

The chasuble is one of the first products of the Rafidian or Mespotamian project begun on behalf of the refugees by an Italian priest, Father Mario Cornioli, Father Zaid Habbaba of the Chaldean Catholic Church and the Salesian Sisters with support of the nunciature in Amman. Italian women living in Amman also assisted.

Father Cornioli, sent by the Latin Patriarchate in Jerusalem to work with Iraqi refugees in Jordan, said the women wanted to create a special gift for Pope Francis because of they understand he feels “very near” to them. They also want to remind him of their “difficult situation” after being forced to flee the Islamic State group in 2014 after being told renounce their Christian faith, join the militants, pay a protection tax or be killed, he said.

The women learned to sew in Jordan, opening a new possibilities for them, Father Cornioli said. “They have once again found their smiles while being and working together,” he said.

The priest said that the project has grown with the women sewing items to be sold in Italy. “This helps them to earn some money and so they can help themselves and their families,” Father Cornioli explained, citing examples of Iraqi Christian refugees with dwindling funds after quickly leaving their homes with few possessions.

“Now they are in Jordan with a something that gives them dignity, a valuable skill which perhaps can be useful if they are resettled in another country,” Father Cornioli said.