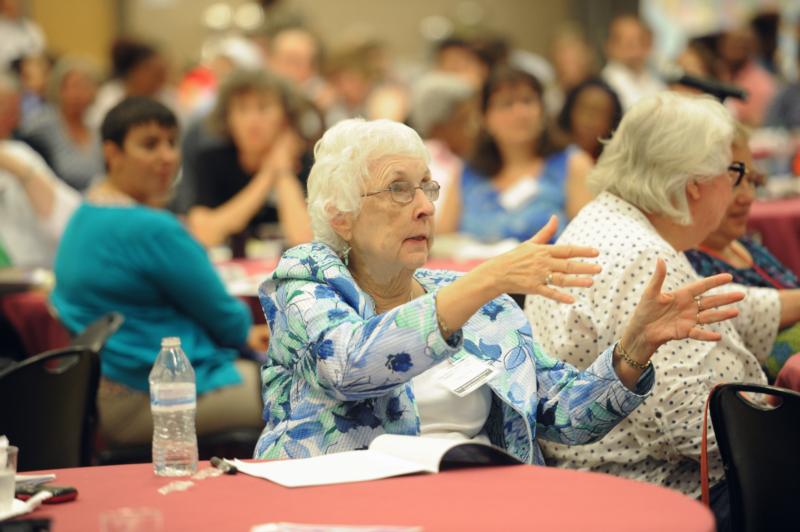 An attendee gestures July 7 during a national symposium on domestic violence held at The Catholic University of America in Washington. (CNS photo/Dana Rene Bowler, CUA)

WASHINGTON(CNS) — The main organizer of a two-day symposium on church response to domestic abuse and violence called the gathering historic.

“None of us know of a national conference that responds to domestic abuse” like this, Sharon O’Brien told Catholic News Service.

O’Brien is a co-founder and the director of Catholics for Family Peace, which late last year joined the National Catholic School of Social Service at The Catholic University of America in Washington.

Sessions themes were drawn from recommendations found in the U.S. bishops’ 2002 pastoral statement “When I Call for Help: A Pastoral Response to Domestic Violence Against Women.” The document was an updated, revised version of their 1992 statement.

“The letter is the most comprehensive, concise, compassionate letter of any religion” on the issue of domestic abuse, O’Brien told CNS. “Because I analyzed 18 religions’ statements, so I can say that. It addresses the person who does abuse, (the person) being abused, and the children who witness it.”

The symposium — which had 54 speakers and 10 sessions with keynotes, panel discussions, and concurrent workshops and roundtables — was designed for clergy and pastoral leaders who want to assist people harmed by domestic abuse and violence in their communities.

A number of sessions addressed a diocesan- and parish-based response to domestic abuse and violence in collaboration with Catholic Charities agencies and other church and community resources.

“Pope Francis’ view of the church as a field hospital is very relevant to this symposium,” said Art Bennett, who is president and CEO of Catholic Charities of the Diocese of Arlington, Virginia, and who moderated one of the panels.

“The church should be a place to help the wounded and those who are in battle. We should be willing to stick our necks out and help people who are suffering from this problem,” he told CNS.

Catherine Hassinger, of Sterling, Virginia, said the outcome of the conference “is to help people within the Catholic culture to recognize what symptoms of domestic violence are and how prevalent it is.”

Hassinger works at Catholic Charities in Arlington and before that worked for nine years at Bethany House of Northern Virginia, a faith-based nonprofit that provides emergency shelter and services to victims of domestic violence.

“We should encourage and motivate others to take action and do something” about domestic abuse, Hassinger said.