Poland visit will be inspired by mercy, pope says 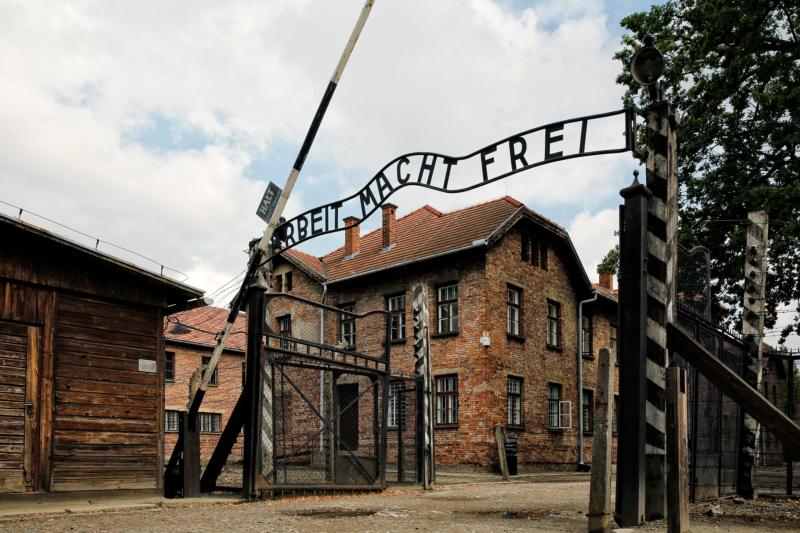 The entrance gate to the Auschwitz Nazi concentration camp is seen in Oswiecim, Poland, in this Sept. 4, 2015, file photo. In a news conference July 20, Jesuit Father Federico Lombardi, Vatican spokesman, said that among the highlights of Pope Francis' visit to Poland for World Youth Day will be his stop at the concentration camps of Auschwitz and Birkenau. (CNS photo/Nancy Wiechec)

VATICAN CITY (CNS) — Pope Francis said he looks forward to his upcoming visit to Poland for World Youth Day and that his visit will be inspired by mercy during this Jubilee Year.

The “blessed memory of St. John Paul II, who instituted the World Youth Days and was the guide of the Polish people in its recent historic journey toward freedom,” will also serve as an inspiration, the pope said in a July 19 video message to the people of Poland.

The pope will join hundreds of thousands of young people from around the world during his July 27-31 visit to celebrate World Youth Day.

The 2016 World Youth Day celebration will mark the 30th anniversary of when St. John Paul II, the former archbishop of Krakow, invited bishops all over the world to hold an annual event for youths in their dioceses. The first international gathering, now held every two or three years, was in 1987 in Buenos Aires, Argentina, where Pope Francis was born and ministered before becoming pope.

In his video message, the pope said he blessed young people traveling to Krakow and was “praying that it will be a pilgrimage of faith and fraternity.”

“I am very anxious to meet you and to offer the world a new sign of harmony, a mosaic of different faces, from many races, languages, peoples and cultures, but all united in the name of Jesus, who is the face of mercy,” the pope said.

Addressing the people of Poland, the pope said that despite the trials and difficulties throughout their history, the Polish nation “has persevered through the power of faith, upheld by the maternal hands of the Virgin Mary.”

“I am certain that my pilgrimage to the shrine of Czestochowa will immerse me in this proven faith and do me so much good,” he said.

Pope Francis said he looked forward to meeting the bishops, priests, men and women religious and the laity, particularly emphasizing the importance of marriage and the family in society.

“The moral and spiritual ‘health’ of a nation is seen in its families. That is why St. John Paul II showed such great concern for engaged couples, young married couples and families. Continue along this road,” the pope said.

In a news conference July 20, Jesuit Father Federico Lombardi, Vatican spokesman, said that among the highlights of the pope’s visit will be his stop at the concentration camps of Auschwitz and Birkenau.

More than 1 million people, including St. Teresa Benedicta of the Cross and St. Maximilian Kolbe, died in those two camps alone, he said.

The pope will also meet with 10 Holocaust survivors and will visit St. Maximilian Kolbe’s cell. Father Lombardi noted that the pope’s visit will coincide with the 75th anniversary of the Polish saint’s death sentence.

NEXT: Catholic priest to coordinate interreligious center at Olympic Village