Stethoscope pope: By listening to youth, he hears what makes them tick 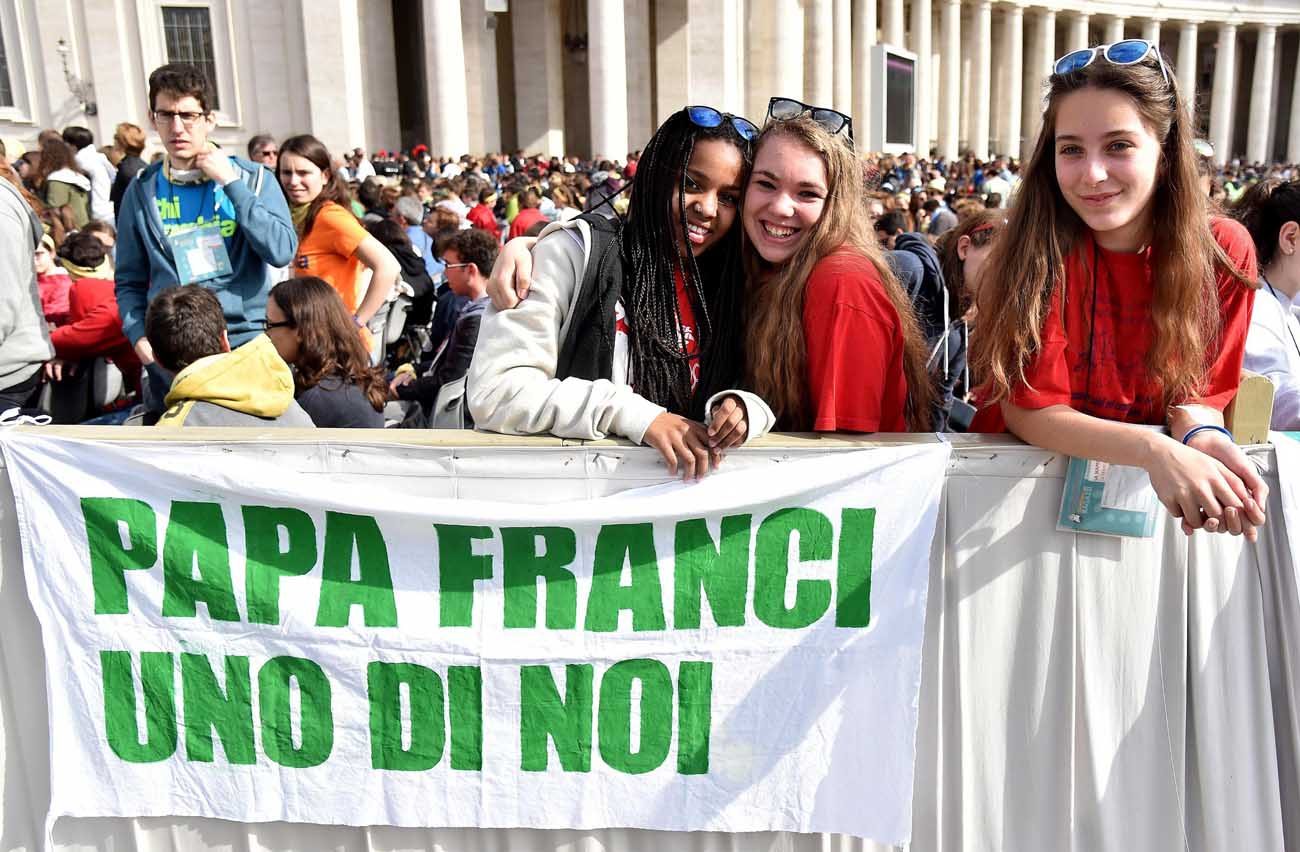 Young pilgrims display a banner that says "Pope Francis One of us" as the pontiff celebrates an April 24 Mass for the Youth Jubilee in St. Peter's Square at the Vatican. (CNS photo/Ettore Ferrari, EPA)

VATICAN CITY (CNS) — When Pope Francis goes to Poland to meet with an expected 2 million young people from around the world, he’s going with a firm idea of the dreams, fears and challenges so many of them face.

He knows what lies inside the hearts and minds of today’s youth, not because of any third-party polling or sophisticated survey, but because Pope Francis practices what he’s called an “apostolate of the ear.” 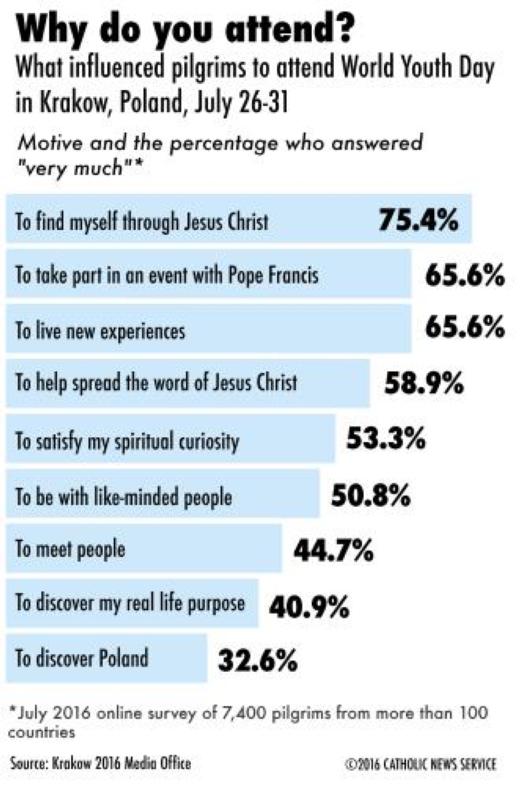 It takes patience and grace, he told disadvantaged university students in Rome in June, to truly listen to what others have to say — a call he repeated during his Angelus address this month, warning that people’s hectic lives were threatening an already hobbled ability to listen.

As pope, a busy ministry that could easily lead to isolation or overscheduling, he has worked hard to make the time to listen to people of all backgrounds in public and private settings. And he has often broken with papal protocol to get an unfiltered look at what today’s youth think and feel.

He will scrap pre-written speeches and ask his sometimes very young audiences what questions they have. He also does interviews with young people, including those who aren’t Catholic or even religious, like when he welcomed six young students and reporters from Belgium in 2014.

When they asked why he agreed to do the video interview with them, the pope said because he sensed they had a feeling of “apprehension” or unease about life and “I think it is my duty to serve young people,” to listen to and help guide their anxiety, which is “like a seed that grows and in time bears fruit.”

His latest sit-down with a group of young people came in May when he met with YouTube personalities from different parts of the world. The popular vloggers have a huge following of millions of young people themselves, and so they know beyond their own personal experiences what many kids today are thinking and feeling.

The full 50-minute video of that closed-door Q&A was uploaded recently with little fanfare by one of the 11 young people and posted on the YouTube channel, Anna RF.

The questions they ask and advice the pope gives offer a good indication of what he’s been hearing these past years and what he may hope to convey when he meets with participants at World Youth Day events.

Here’s a brief look at their biggest concerns and how the pope responded:

“Aggression is always a sign of insecurity,” so try to neutralize the attack by showing good manners, listening, softly asking questions about what the person is trying to say and letting them vent their anger.

“You should never react to provocation. It’s better to look stupid than respond when you are provoked,” he said.

Favor encounters and dialogue that look for a sense of belonging that goes beyond racial, religious, ethnic or group identities. “There is something far greater” to which everyone belongs — the human family, he said.

— Identity and belonging: The pope said people have to feel they belong to something, and if their family or community is broken, then a virtual belonging online can help. Supportive peers online can create a circle of friendship and belonging, and from there “craft a path of hope” for those who feel lost or alone.

— Helping those who feel hopeless or lost: The best thing to do is not to speak, but hold their hand, he said.

“We have forgotten the language of gestures and actions” and have gotten too used to words, which sometimes, especially when someone is in pain, “are of no use.”

— Immigration and integration: Newcomers need to be able to hold onto their own culture, he said.

Europe has such a negative experience of migration because they did not develop healthy policies that fostered integration while allowing people to keep their own culture without being judged or rejected, he said.

— Fostering empathy, understanding among religions in the face of negative media messaging: The relationship between people of different religious beliefs needs to be based on brotherly love because “we all have the same father,” he said.

People have to listen to each other and look at the positive things each religion proposes in order to build that positive relationship, he said. Solely underlining what divides one religion from another amounts to “putting up a wall” and attacking each other, he added.

“What makes us attack, what divides us are fundamentalists,” he said, in which individuals think they themselves hold the truth and everyone else is wrong. Starting with the awareness “we are all brothers and sisters,” he said, “leads to dialogue.”

— Taking a stand on controversial topics, how to fight for what is right: The pope said he is not always successful in quelling the anger his position or words may cause “so if I fail, I always say it is my fault.”

He said he looks at what went wrong — not to invent an excuse, but to see where dialogue can be built.

“What helps me is to listen,” he said. Sit down and hear what others have to say and talk according to the art of persuasion, not aggressive debate, he said. “Persuasion can be peaceful. This is my way.”

The pope repeatedly shows through his gestures and words that “the root of peace lies in our capacity to listen,” as he said at his Angelus address July 17.

Listening for the pope ends up being not just a method for gathering information for helping people; the gesture of listening is itself an act of peace.

NEXT: Bishop in Turkey: Catholics watchful during crackdown after failed coup