Catholic mission set up to bring God to hipsters 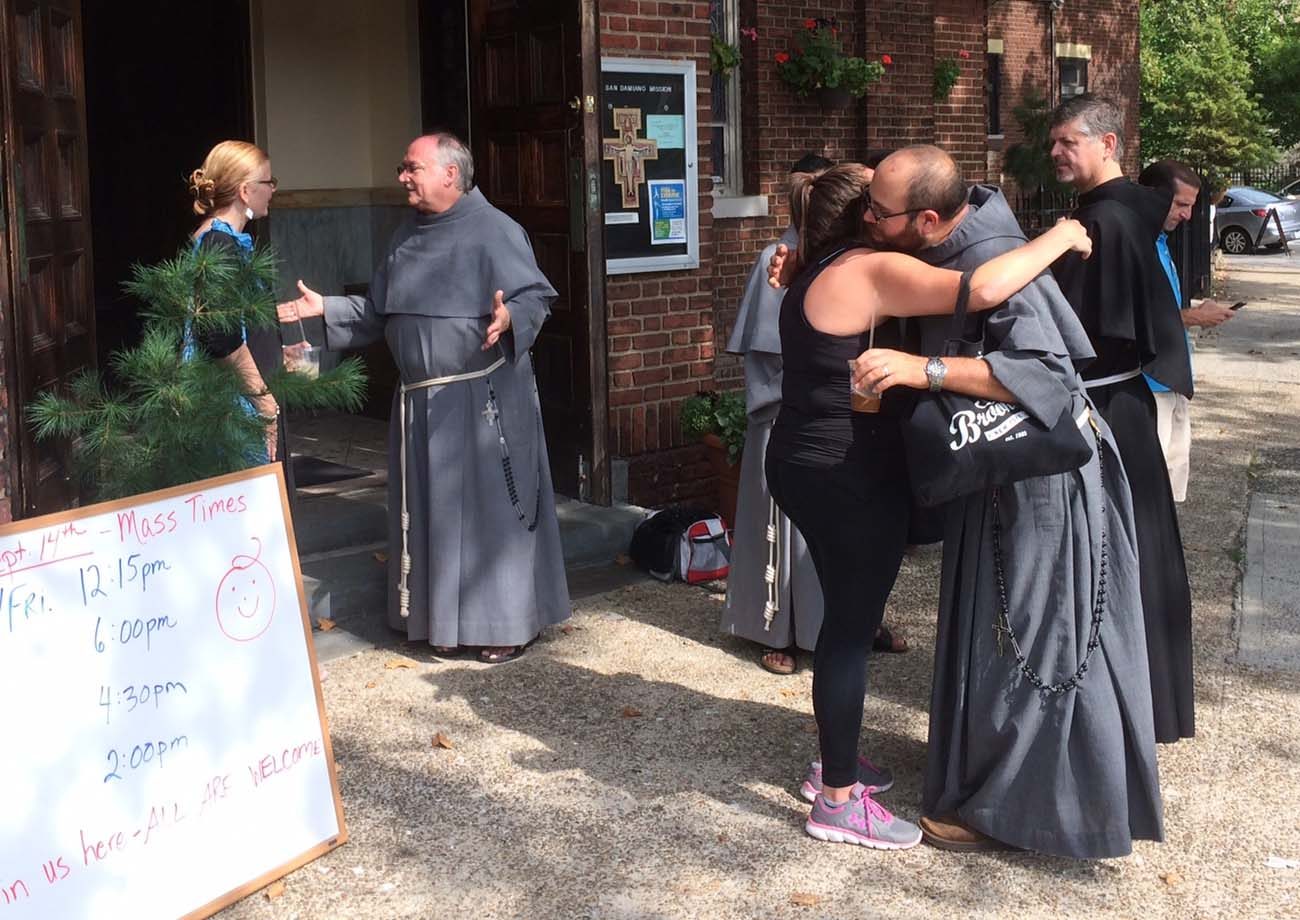 Conventual Franciscan friars greet the residents of the Greenpoint/Williamsburg section of Brooklyn, N.Y., Aug. 23, 2015, shortly after they opened their San Damiano Mission in the neighborhood, which had been the Holy Family (Slovak) Church. (CNS photo/Ed Wilkinson)

WASHINGTON (CNS) — The gray robes worn by the Conventual Franciscan friars may not be fashionable in the Williamsburg/Greenpoint neighborhood of Brooklyn, New York, but the religious men appear to be fitting in just fine in the heart of “hipster” country.

This particular neighborhood has become nationally recognized as a place where so-called “hipsters” live, and it’s one of the reasons why the friars’ ministry is now there.

They have established a ministry of presence to help bring the word of God to a segment of society that tends to be suspicious of, or oblivious to, organized religion.

Brooklyn Bishop Nicholas DiMarzio invited the friars to convert the Holy Family Slovak Catholic Church into the San Damiano Mission in February 2015 as an evangelizing anchor in the Williamsburg/Greenpoint hotspot for “hipsters.”

According to the Urban Dictionary, “hipsters” are a subculture of men and women, typically in their 20s and 30s, who seek out countercultural activities, engage in progressive politics, value independent thinking, crave intellectual conversation and have an appetite for art and indie-rock music.

“We try not to use that word ‘hipster’ too often, because it’s sometimes thought of as derogatory,” Conventual Franciscan Brother Nicholas Spano told Catholic News Service during an Aug. 23 interview.

“Us being here is more than a ministry of presence,” Brother Nicholas said. “We get out of the church, wearing our habits so that it’s obvious who we are and we’re getting to know the people in the area. We’re letting them know we’re not scary or unapproachable. We’re bringing the church to the people in ways they hadn’t considered before.”

Locating in the heart of “hipster” country allows the friars to act on Pope Francis’ call for members of the clergy to get out of their rectories, meet the people where they live, play and work, and “smell like the sheep.” 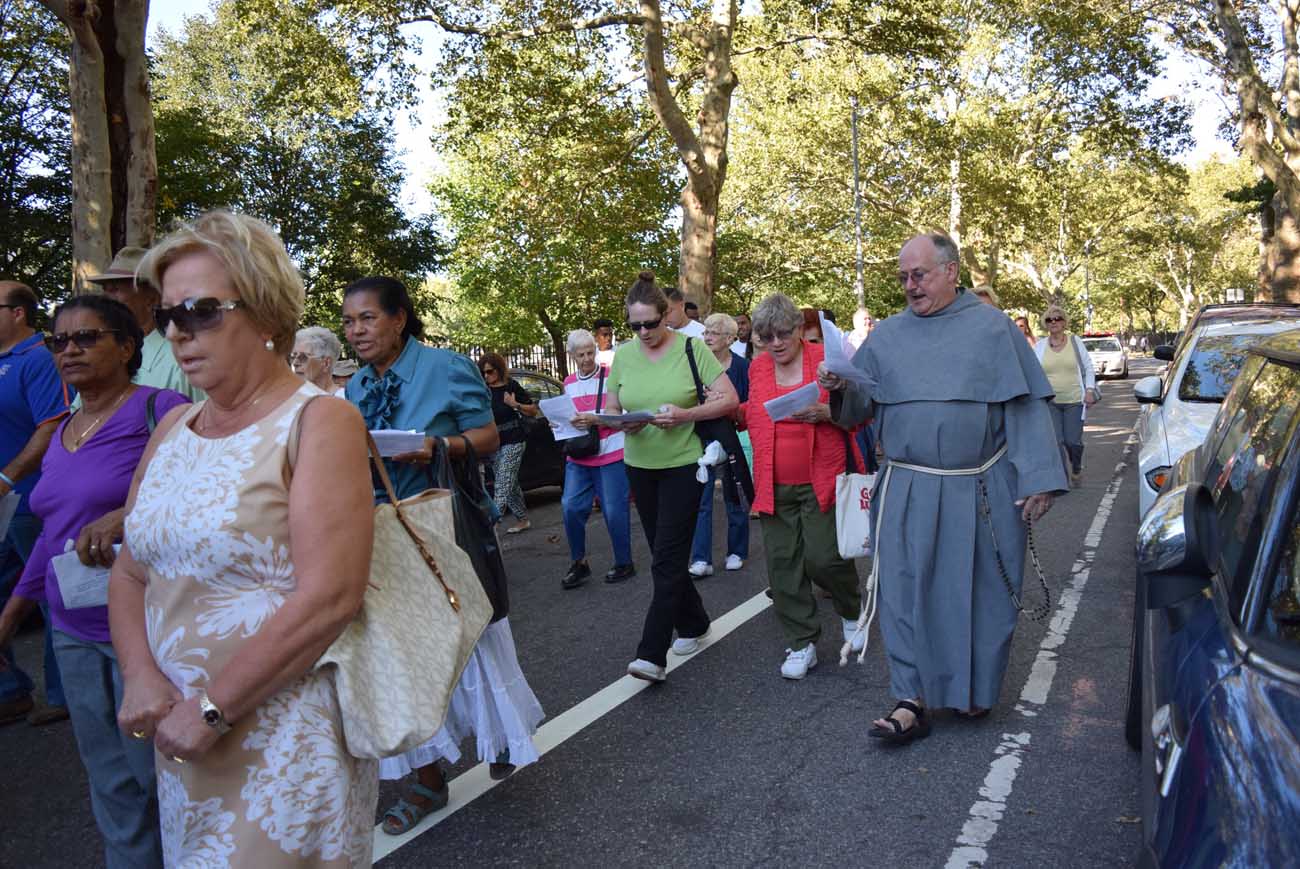 A Conventual Franciscan friar walks Sept. 20, 2015, with people who live near his San Damiano Mission in the Greenpoint/Williamsburg section of Brooklyn, N.Y. They were participating in an event sponsored by Catholic Charities Brooklyn and Queens in honor of the U.S. visit by Pope Francis. (CNS photo/Ed Wilkinson)

Although Brother Nicholas contends they began planning their ascension into “hipster” country before Pope Francis uttered those famous words to brother priests.

“Getting out to where ‘the people are’ is a very Franciscan value,” he said with a laugh, “so I guess that’s how the Franciscan example has gotten to the chair of Peter.”

The friars have been a welcomed addition to the neighborhood, said Larry Betz, director of the Brooklyn Athletic Club, a gym that caters to the health conscience hipsters.

“I may see them out and about having coffee and I can just sit down and talk to them about what’s going on, how’s the weather, what do you think about this, and, you know, just get some perspective on life,” Betz said.

After being in the neighborhood for a few weeks, the friars became friendly with the folks who run a local radio station, “The Lot Radio,” with whom they began co-hosting concerts at the San Damiano Mission.

The gigs are attracting more than 200 young adults to each show, people who otherwise wouldn’t entertain venturing inside the church and Brother Nicholas said some of those people are returning to attend Mass.

“We are a community of faith,” Franciscan Father Raphael Zwolenkiewicz told the The Tablet, newspaper of the Diocese of Brooklyn, shortly after the mission began hosting neighborhood events in August 2015. “We want to be able to create community, a place where people can come and socialize.”

By hosting regular cookouts and other neighborly gatherings at the mission, the friars are winning some of the locals over in the spirit of evangelization.

But, they are also making their presence known by walking the neighborhood streets, dropping into the trendy coffeehouses, engaging the hipsters in conversation and letting them know that they are not nearly as uncool as their habits might otherwise indicate.

They also leave the church building open so that passers-by will feel free to stop in and spend some quiet time in prayer and reflection.

Before assuming leadership of the church, the former Holy Family Church was only opened long enough for a handful of Catholics to attend the 30-minute weekday Mass and the longer weekend Mass, Brother Nicholas said. “Otherwise it was locked.”

The friars also replaced the old wooden entrance doors with see-through glass ones, so that people can see that the church is now unlocked most of each day, that there is activity going on inside, and most importantly know they are welcome to come in, Father Zwolenkiewicz said.

Though the church isn’t packed every weekday or weekend yet, there has been a steady increase in Mass attendance in the 18 months since the friars transformed it into the San Damiano Mission and they’ve added a second weekend Mass to accommodate more worshipers, Brother Nicholas said.

“People are inside the church,” Brother Nicholas said, “and I see that as progress.”

Ed Wilkinson and Katie Breidenbach contributed to this story.