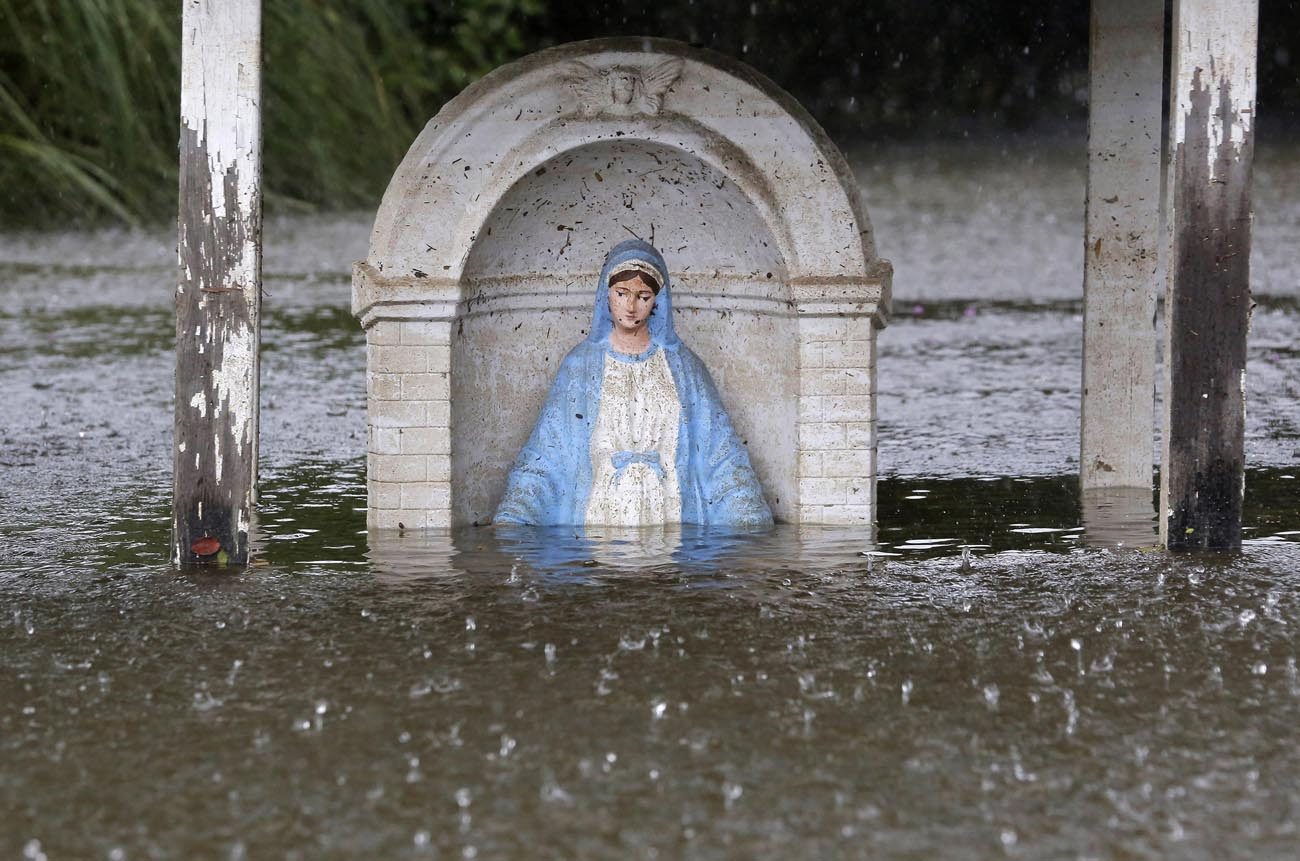 BATON ROUGE, La. (CNS) — The line of destruction caused by historic flooding in southern Louisiana stretches for 25 miles, and according to Red Cross officials, it is the worst natural disaster in the United States since Superstorm Sandy in 2012.

“As we all know the severe flooding in many areas of our diocese has dramatically affected the well-being and livelihood of countless people,” said Baton Rouge Bishop Robert W. Muench in a videotaped message posted to the diocese’s website, www.diobr.org.

“To those so impacted I express genuine empathy, heartfelt solidarity and commitment to help as best as we can,” he said, adding his thanks “to those who have so impressively and sacrificially reached out to serve.” He called the “outpouring of concern” extraordinary in “our area and beyond.” On Aug. 14, Bishop Muench visited three evacuation shelters to comfort evacuees.

In his video message, the bishop also pointed out that the diocesan website has a how-to for people who want to donate money or items to flood victims.

In a statement released Aug. 24, the president of the U.S. Conference of Catholic Bishops called on Catholic parishes across the U.S. to take a second collection on or around Sept. 18. Archbishop Joseph E. Kurtz of Louisville, Kentucky, encouraged U. S. Catholics “to respond generously. Our prayer and material support is urgently needed to help rebuild lives.”

Donations, he said, will go to support the humanitarian efforts of Catholic Charities USA, the church’s domestic relief agency. 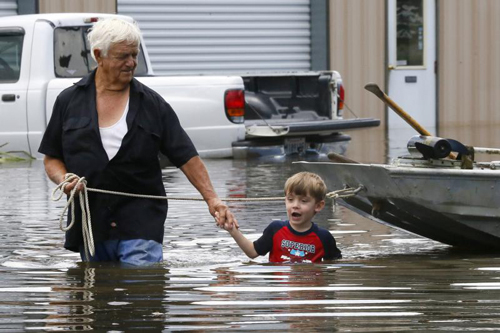 News reports said the civil entity of East Baton Rouge Parish was the hardest hit of parishes in the region by the heavy rains that fell Aug. 11-14. In some areas, as much as 2 feet of rain fell in 48 hours; in another, more than 31 inches of rain fell in 15 hours.

Civil authorities reported that at least 13 people died in the floods and that about 60,000 homes were damaged, although a Baton Rouge economic development group put the number of damaged houses at 110,000. The Red Cross put the overall cost of recovery at $30 million.

“Thousands of people in Louisiana have lost everything they own and need our help now,” Brad Kieserman, the Red Cross’ vice president of disaster services operations and logistics, told CNN.

In such a short time, “we’d experienced growth as a family, with the students, with the faculty,” said Jim Llorens, the school’s president, who called the flooding “heartbreaking.” The brand-new school building is closed while school officials assess the damage and find another location to hold classes.

“It was really beginning to come together as a true Cristo Rey family, so we have to regroup … and make sure we don’t lose that,” Llorens said in an interview with the diocese’s CatholicLife Television apostolate and The Catholic Commentator, the diocesan newspaper.

The newspaper and the TV outlet have produced a series of six videos on the flood and its aftermath. Titled “When the Waters Rose,” the series can be viewed at www.catholiclifetv.org in the site’s “Programming” section.

In another of the videos a mom and her children, all members of St. Margaret Parish, were helping flood victims — even though the family had their own losses, including their house and three vehicles.

“We are fortunate we have each other and that’s a blessing. We have a lot of friends in the same situation,” the mom told a reporter. “We’re just very thankful we’re able to give back … and people have blessed us very much in clothes and water and such. We’re just doing a little bitty bit of what we can do (for others).”

In his statement, Archbishop Kurtz urged all Catholics to join the church “in being a visible witness to the healing presence of Jesus alive in the world” by helping flood victims. He acknowledged that not all U.S. parishes may be able to have a second collection and encouraged individuals to donate directly to Catholic Charities USA at https://catholiccharitiesusa.org.

Whether your donation is large or small, let us also be sure those suffering feel the power of our prayer to sustain them in the difficult days ahead.

The Knights of Columbus, based in New Haven, Connecticut, said in an Aug. 23 new release statement its members have volunteered to help flood victims by preparing and distributing pallets of food and water, and providing bleach and other cleaning materials. Local Knights’ councils are running soup kitchens to feed thousands of people each day.

The Knights as an organization has given a $200,000 donation to the Baton Rouge Diocese and sent $30,000 to the Knights’ Louisiana State Council.

In a week’s time the Knights of Columbus also raised more than $250,000 for flood relief, the release said.

“We have seen incredible generosity from our members,” said Supreme Knight Carl Anderson in a statement. “The funds we raise will go directly to help those affected by this tragedy, and working closely with the Catholic Church and our Knights in Louisiana, we will continue to make a real difference in the lives of the people of the Baton Rouge area.”

In an Aug. 19 video interview for the diocese’s “When the Waters Rose” series, he outlined four ways they were reaching out. First, there’s the Laundry Brigade, which offers to pick up clothes, bed linens and other items muddied by the rising waters, launder them and “get them back the next day,” Father Gyan said.

Next parishioners are running St. Theresa’s Taxi service to provide transportation for those without any way now to get to the store, doctors’ appointments and the like. Cooks for Christ is made up of parishioners preparing and taking meals to residences where families have absorbed other family members and friends left homeless, the priest explained.

Finally the God’s Gutters demolition crew that will go into damaged houses to clear out water-soaked carpet, drywall and furniture and anything else that is damaged.

Father Gyan added that the parish intends to have second collection to raise funds to buy gift cards to Lowe’s, Home Depot and other stores to help people repair their homes and replace what they have lost.

Editor’s Note: Donations to help flood victims can be made directly to:

NEXT: Catholic mission set up to bring God to hipsters