The battle over gun regulation returns to the election season 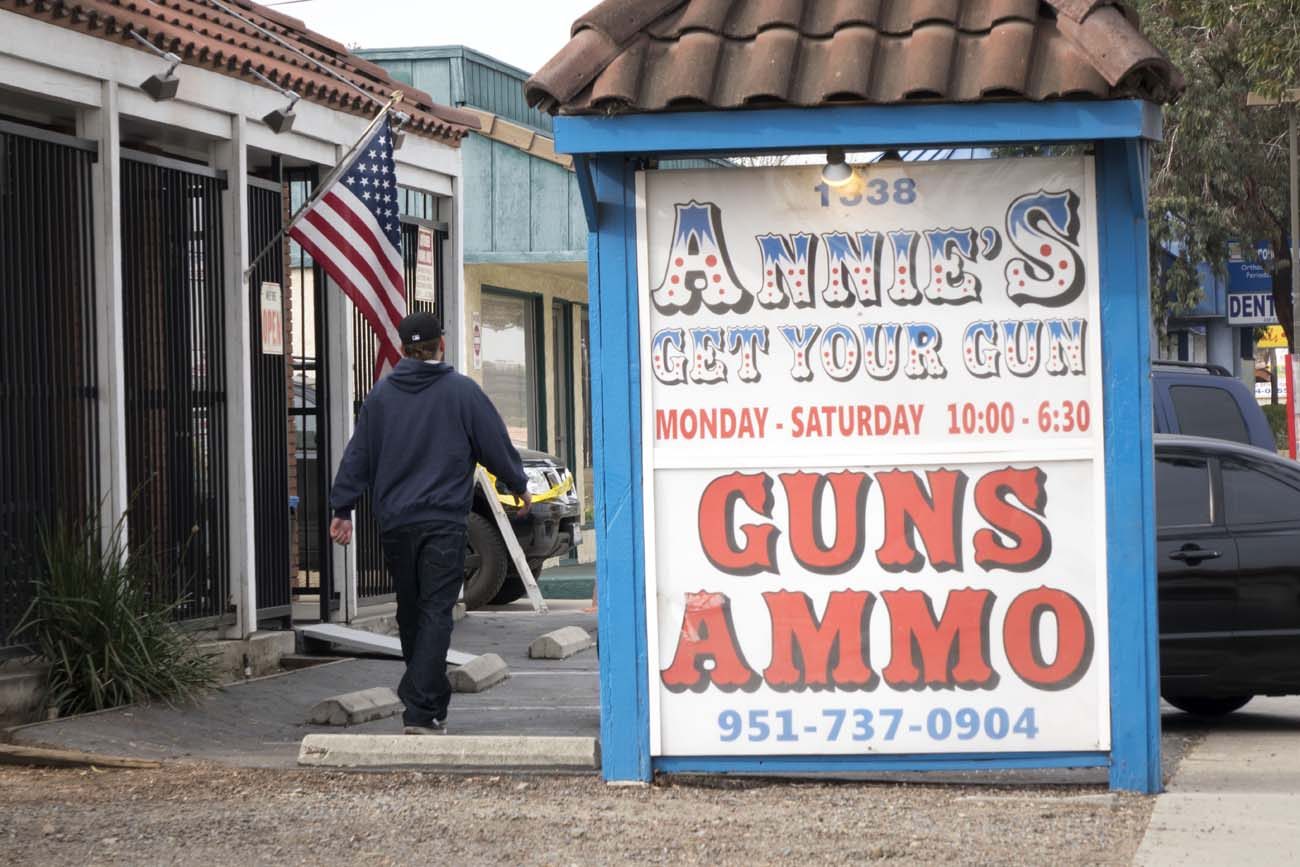 A man walks past a gun store in 2015 in San Bernardino, Calif. Arguments about violence, guns and which kinds of arms should be available to the public long have been a staple in modern-day presidential elections, and this year it's no different. (CNS photo/eugene Garcia, EPA)

WASHINGTON — On the campaign trail, Republican Presidential candidate Donald Trump recently referenced the increasing violence in Chicago, which reached an infamous milestone this summer: the most violent August the city has seen in 20 years.

Chicago Police Department reported 90 homicides, 384 shooting incidents and 472 shooting victims in August. Trump said in an Aug. 22 interview on Fox News that if police were “much tougher,” the problem could be solved in a week. Others, including the city’s archbishop, have suggested there’s a different way to combat the violence in Chicago and elsewhere.

“There really is no reason why we need these combat weapons on our streets,” said Archbishop Blase J. Cupich of Chicago, speaking in a June interview with Chicago TV station WGN about violence and the availability of certain weapons.

Arguments about violence, guns and which kinds of arms should be available to the public long have been a staple in modern-day presidential elections, and this year it’s no different.

“We uphold the right of individuals to keep and bear arms, a natural inalienable right that predates the Constitution and is secured by the Second Amendment,” says theRepublican Party’s 2016 platform. “We oppose ill-conceived laws that would restrict magazine capacity or ban the sale of the most popular and common modern rifle. We also oppose any effort to deprive individuals of their right to keep and bear arms without due process of law. We condemn frivolous lawsuits against gun manufacturers and the current administration’s illegal harassment of firearm dealers.”

In addition, the platform says, “We oppose federal licensing or registration of law-abiding gun owners, registration of ammunition, and restoration of the ill-fated Clinton gun ban.”

The Democratic Party says in its 2016 platform: “We will expand and strengthen background checks … revoke the dangerous legal immunity protections gun makers and sellers now enjoy; and keep weapons of war — such as assault weapons and large capacity ammunition magazines — off our streets. We will fight back against attempts to make it harder for the Bureau of Alcohol, Tobacco, Firearms, and Explosives to revoke federal licenses from law breaking gun dealers, and ensure guns do not fall into the hands of terrorists, intimate partner abusers, other violent criminals, and those with severe mental health issues.”

Sister Marie Lucey of the Franciscan Action Network in Washington said that from a faith perspective, Christians are called to protect life, and trying to get high-powered weapons that can and have been used to kill many people — and as fast as possible — is a life issue.

“Every life has value. Every life is God’s creation,” she said. “Whether it’s abortion, the death penalty, or a person is a victim of gun violence, these are all precious lives that are taken.”

As a representative of the Franciscan Action Network, she has worked with Faiths United to Prevent Gun Violence, a coalition of faith groups seeking dialogue with legislators to affect national policy related to guns. The group planned a Sept. 25 event asking people to sing a tune about peace during Sunday church services or elsewhere, so that violence related to guns ends. The event is part of The Concert Across America to End Gun Violence, which encourages faith communities to use music as a way to bring attention to the issue of gun violence.

“We are not calling for an end to guns,” Sister Lucey said. “That’s not what we’re about. It’s to prevent gun violence.”

In “Forming Consciences for Faithful Citizenship,” the U.S. Conference of Catholic Bishops’ quadrennial document released in time for presidential election years to educate Catholics on their responsibilities as citizens, the bishops say they support “reasonable restrictions on access to assault weapons and handguns.”

In addition, the bishops said in the statement “Responsibility, Rehabilitation and Restoration: A Catholic Perspective on Crime and Criminal Justice,” issued in November 2000, that “as bishops, we support measures that control the sale and use of firearms and make them safer (especially efforts that prevent their unsupervised use by children or anyone other than the owner), and we reiterate our call for sensible regulation of handguns.”

To some like John Snyder, that’s “an unfortunate attitude.” Snyder, a Catholic whose Twitter handle is @Gun Dean Snyder, said guns are necessary to defend innocent lives from acts of terrorism and criminal violence. He runs a group called St. Gabriel Possenti Society, which is proposing Vatican recognition of the saint as the “patron of handgunners and to stress the historical, philosophical and theological bases for the doctrine of legitimate self-defense.” His www.gunsaint.com website features an image of St. Gabriel Possenti with a lizard on the right and a gun on the left.

But to others such as Bishop Kevin J. Farrell, the issue is not about limiting handguns. It’s about giving anyone who will pay access to weapons that have capacity to kill large numbers of people. The former bishop of Dallas wrote in a January 2016 blog that “Congress has unabashedly sold itself to the gun lobby. If there was ever any doubt, its recent action to kill legislation to ban people on the terrorist no-fly list (from acquiring guns) made it obvious. It is absurd that terrorists, criminals, and mentally unbalanced people can freely and openly buy weapons not intended for sport, but designed to kill people. Writers of the Second Amendment envisioned smooth bore muskets and not semi-automatic and automatic weapons of war.”

He continued: “Let us pray that our legislators will see this as a human and not a political concern so that gun violence can be mitigated through appropriate legislation that allows us to live in a safe environment while respecting our Second Amendment rights.”

Legislation related to guns, however, involves some of the most contentious battles in Congress. Inlate June, Democrats in the House of Representatives held a sit-in protesting the lack of action on four bills related to gun legislation proposed after a June 12 mass shooting in Orlando, Florida.

But then another mass shooting occurs and there’s more talk but little action and little consensus on what to do, she said.

“After the Newtown (Connecticut) shooting, everybody thought, surely, these little children were killed, surely we were going to do something and we didn’t. And then you ask yourself, when is the next mass shooting going to occur? Because you know it’s going to happen somewhere.”

PREVIOUS: MRS gets $1 million-plus grant from Mormons for refugee resettlement