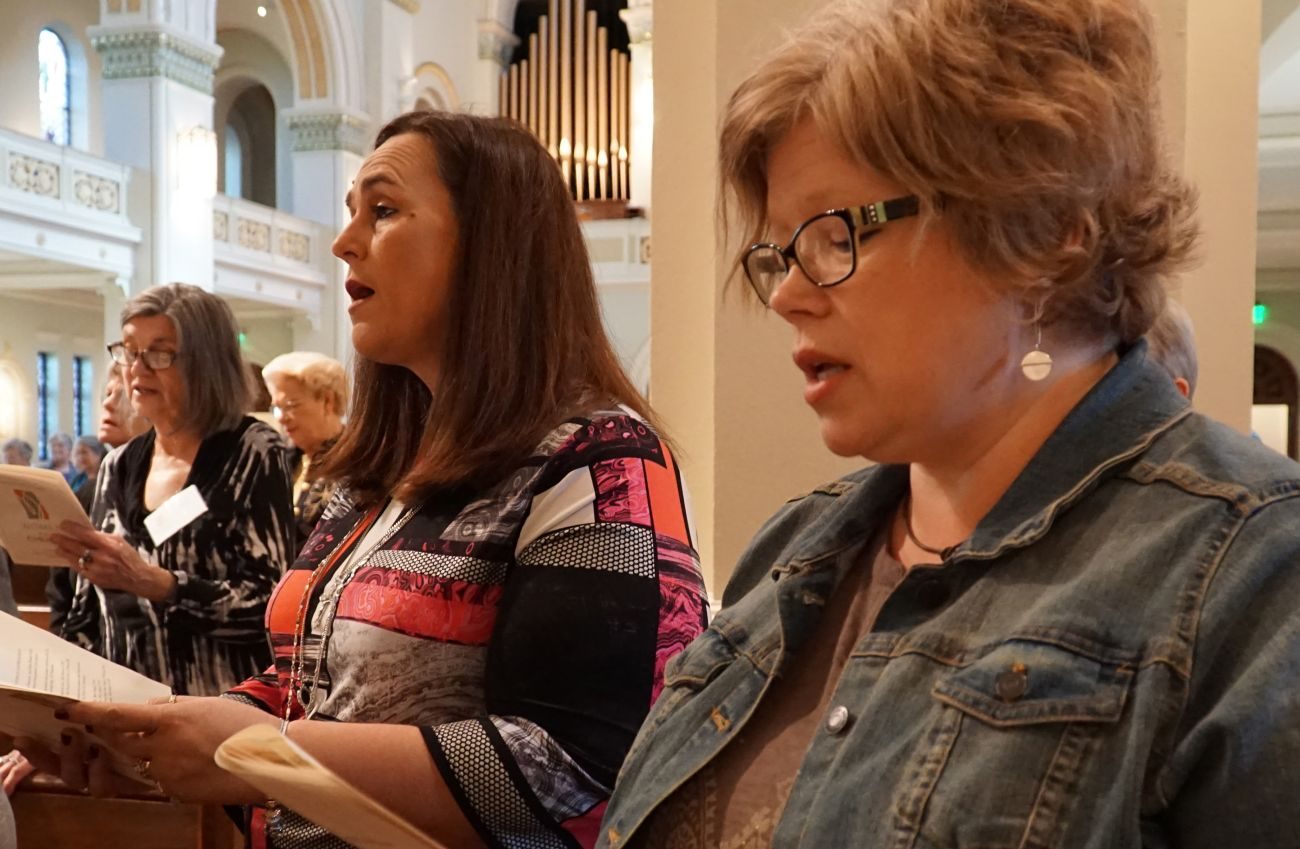 Jonna O'Bryan, foreground, and Carrie Williamson of St. Patrick Church in Louisville, Ky., sing Oct. 9 during the closing liturgy of the "Women of the Church" conference in Ferdinand, Ind. The three-day conference drew women religious, priests and lay people interested in promoting opportunities for women in the church. (CNS photo/Marnie McAllister, The Record)

FERDINAND, Ind. (CNS) — When Pope Francis called for “a more incisive female presence” in the church in his 2013 apostolic exhortation, “The Joy of the Gospel,” women in the church took notice.

And a handful of women in southern Indiana took action.

They began organizing a conference focused on female leadership in the church and brought it to fruition Oct. 7 to 9. About 250 women and a handful of men gathered for the “Women of the Church” conference at Monastery Immaculate Conception Church in Ferdinand.

The event was sponsored by the Benedictine Sisters of Ferdinand and St. Meinrad Seminary and School of Theology in St. Meinrad.

Conference co-chairs — Benedictine Sister Jeana Visel and Kimberly Baker, both on the faculty of St. Meinrad — pointed to the Second Vatican Council document “Lumen Gentium” to explain this notion. The document’s fourth chapter, which focuses on the laity, explains that lay faithful “are in their own way made sharers in the priestly, prophetical, and kingly functions of Christ; and they carry out for their own part the mission of the whole Christian people in the church and in the world.”

Pope Francis also discussed this in “The Joy of the Gospel” (“Evangelii Gaudium”), in which he points out that the reservation of priesthood to men “can be especially divisive if sacramental power is too closely identified with power in general. It must be remembered that when we speak of sacramental power, ‘we are in the realm of function, not that of dignity or holiness.'”

Baker, an associate professor of church history at St. Meinrad, said: “This isn’t new, but the message isn’t out there. It flows very naturally from Vatican II. It’s something the church has been speaking about for a long time. I think Pope Francis has given a fullness to the message.”

Echoing the pope’s message, conference speaker Kathleen Sprows Cummings posed this question: “Do ordination and leadership need to be fused the way they are?”

Cummings, a historian at the University of Notre Dame, was one of three keynote speakers during the conference. She was joined by Carolyn Woo, the outgoing president and CEO of Catholic Relief Services, which is the international relief and development agency of the U.S. Conference of Catholic Bishops. The conference’s final keynote was presented by Sister Mary Catherine Hilkert, a Dominican Sister of Peace, who is a professor of theology at the University of Notre Dame.

Woo, whose talk centered on her own journey as a female leader in the church, noted that she had trouble imagining herself as a church leader because she had few examples to follow. She drew strength and inspiration, she said, from the Maryknoll sisters who taught her in Hong Kong, where she was a refugee from China.

Sister Hilkert repeated the emphasis on the baptismal call and encouraged her listeners also to draw strength from the gifts of the Holy Spirit. She noted that throughout Scripture, God entrusted his word to the entire church — men and women. For the church to be whole, she said, all people must be able to share their gifts.

Sister Visel, conference co-chair, said in an interview after the conference ended that she and the other organizers “are so grateful for the work women have done (in the church) and the way they have paved the way for us.”

While all of the keynote speakers were female, a handful of men had a voice at the conference. One of the break-out sessions was led by Edward Hahnenberg of John Carroll University in Ohio. And two prelates took part in a question-and-answer session — Bishop Charles C. Thompson of Evansville and Cardinal-designate Joseph W. Tobin of Indianapolis. (His appointment to the College of Cardinals had not yet been announced when the conference took place.)

The cardinal-designate and Bishop Thompson answered a variety of questions related to the role of women in their dioceses and in the wider church. The questions were culled by conference organizers from about 40 queries submitted by conference participants.

Both men acknowledged that there was room for improvement in their dioceses and in the church. Cardinal-designate Tobin encouraged his listeners to help church leaders recognize ways women can and do contribute to the church. “We don’t always see or hear what’s there. Point it out. Sometimes we’re not aware,” he said.

He also encouraged women to enroll in programs like St. Meinrad’s lay degree program, where they can receive the training they need to earn leadership roles in the church, he said.

PREVIOUS: Longtime immigration reporter focuses on one teen in ‘Book of Isaias’

NEXT: Political discourse that demeans women, religion ‘must change,’ says US bishops’ head