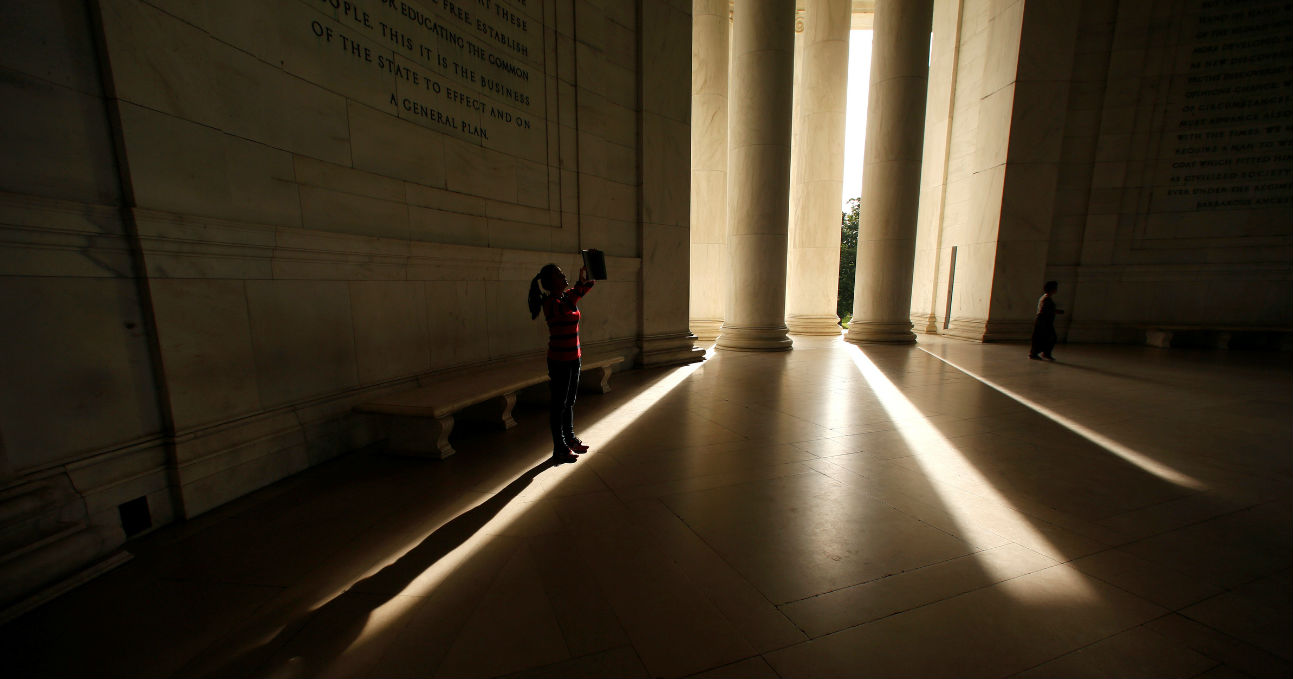 A woman takes a photo with her tablet at the Jefferson Memorial in Washington Oct., 12. Archbishop Joseph E. Kurtz of Louisville, Ky., president of the U.S. Conference of Catholic Bishops, said Oct. 14 that too much of the political discourse during this election year "has demeaned women and marginalized people of faith." (CNS photo/Kevin Lamarque, Reuters)

WASHINGTON (CNS) — Too much of the political discourse during this election year “has demeaned women and marginalized people of faith,” the president of the U.S. Conference of Catholic Bishops said Oct. 14.

“This must change,” said Archbishop Joseph E. Kurtz of Louisville, Kentucky. “True to the best hopes of our Founding Fathers, we are confident that we can and will do better as a nation.”

“Politicians, their staffs and volunteers should reflect our best aspirations as citizens,” he said.

The archbishop’s statement came at the end of a week of fallout over controversies involving the presidential campaigns of Republican nominee Donald Trump and Democratic nominee Hillary Clinton.

One controversy involved NBC’s Oct. 9 leaking of a 2005 audio clip of Trump making lewd sexual remarks about women. The other involved an Oct. 11 release by WikiLeaks of what it said was an email chain among top officials from Clinton’s campaign discussing how many powerful conservatives in the U.S. are converts to Catholicism, which one email called “an amazing bastardization of the faith.”

“At this important time in our nation’s history, I encourage all of us to take a moment to reflect on one of the founding principles of our republic — the freedom of religion,” Archbishop Kurtz said. “It ensures the right of faith communities to preserve the integrity of their beliefs and proper self-governance.

“There have been recent reports that some may have sought to interfere in the internal life of the church for short-term political gain. If true, this is troubling both for the well-being of faith communities and the good of our country,” he said.

“As Catholics, we hold onto our beliefs because they come to us from Jesus, not a consensus forged by contemporary norms. The Gospel is offered for all people for all times,” Archbishop Kurtz said. “It invites us to love our neighbor and live in peace with one another. For this reason, the truth of Christ is never outdated or inaccessible. The Gospel serves the common good, not political agendas.”

He urged Catholics and all people of goodwill in the nation to be “good stewards of the precious rights we have inherited as citizens of this country.”

“We also expect public officials to respect the rights of people to live their faith without interference from the state. When faith communities lose this right, the very idea of what it means to be an American is lost,” he added.