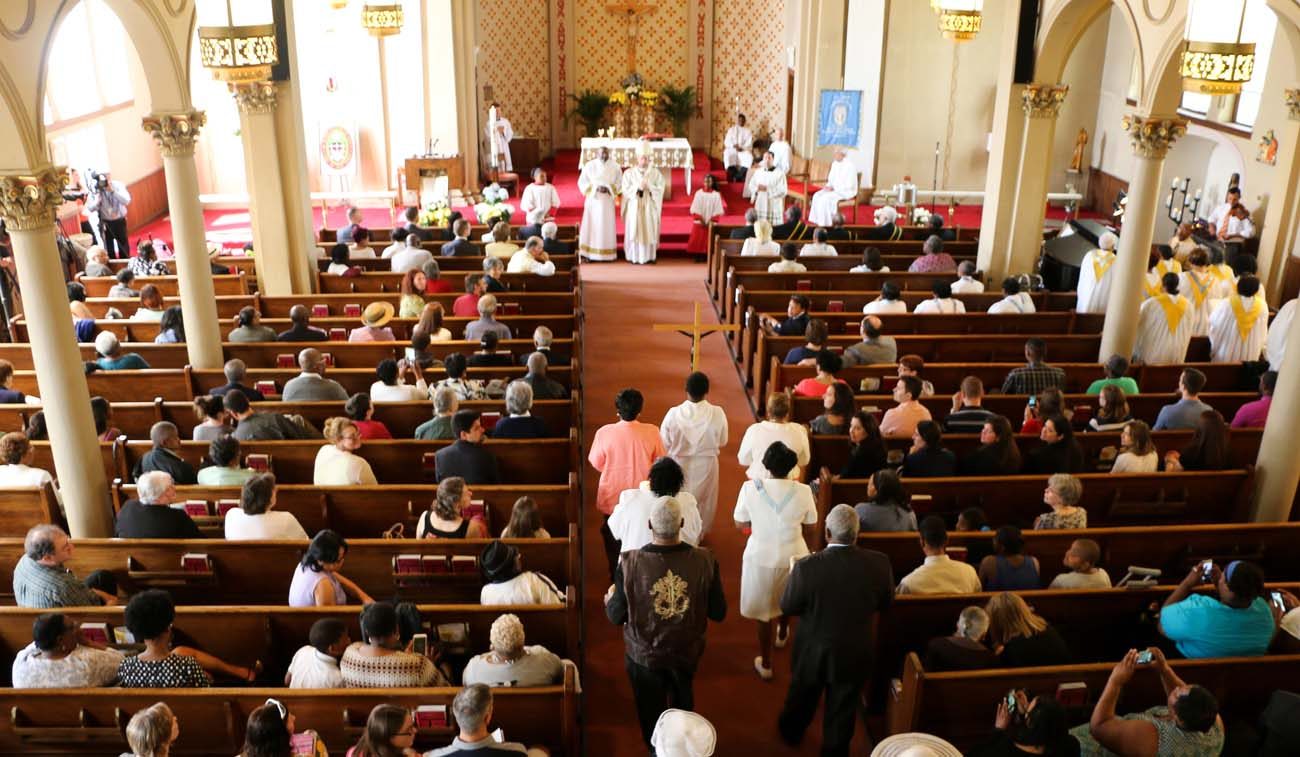 Congregants at St. Peter Claver Church in Baltimore carry offertory gifts to the altar during a 2015 Mass. The U.S. bishops will concelebrate Mass at the church Nov. 14, the first day of their fall general assembly. (CNS photo/courtesy Catholic Review)

Established in 1888, St. Peter of Claver has the largest African-American Catholic congregation in the city and has a long-standing tradition of civil rights activism.

Named for the patron saint of slaves and ministry to African-Americans, today St. Peter Claver is twinned with St. Pius V. The parish community is in Baltimore’s Sandtown-Winchester neighborhood, not far from where Freddie Gray Jr. was arrested in April 2015 and suffered fatal injuries while in police custody.

Gray’s death was the flashpoint in rioting that raised awareness of urban dysfunction in the center of the nation’s first archdiocese.

“I am grateful to be able to join my brother bishops on this occasion as we concelebrate Mass at such a significant church in Baltimore’s history,” said Archbishop Joseph E. Kurtz of Louisville, Kentucky, president of the U.S. Conference of Catholic Bishops.

“Together, we offer our solidarity and support to Baltimore’s African-American community as we work in unity toward peaceful solutions in all our communities across the country,” he said in a Nov. 3 statement.

“The decision by the leadership of the bishops’ conference to hold this special Mass at St. Peter Claver Church in West Baltimore underscores the church’s great pastoral concern for the challenges that are present in too many cities in our country and for our sisters and brothers who are affected by them,” said Baltimore Archbishop William E. Lori.

St. Peter Claver Church is staffed by priests of the Society of St. Joseph of the Sacred Heart, better known as the Josephites. The religious community, founded after the Civil War to minister to newly freed slaves, serves in parishes and special ministries, spanning seven states and the District of Columbia.

On the agenda for the bishops’ Nov. 14-16 fall meeting is a discussion of ways for the church to promote peace in U.S. communities torn apart by violence. It will stem from a report to be presented to the bishops from a task force formed this past summer after shootings by police and of police took place in Baton Rouge, Louisiana; Minneapolis; and Dallas.

When Archbishop Kurtz announced creation of the USCCB Task Force to Promote Peace in Our Communities, he said there needed to be “ways of nurturing an open, honest and civil dialogue on issues of race relations, restorative justice, mental health, economic opportunity and addressing the question of pervasive gun violence.”

The USCCB also declared Sept. 9 of this year as national Day of Prayer for Peace in Our Communities. On that day in Baltimore, Archbishop Lori led a prayer walk in the Sandtown-Winchester neighborhood. The event was hosted by St. Peter Claver and included a listening session led by the archbishop.

Following Deacon Willard Witherspoon, who carried the crucifix, more than 100 men and women, some requiring assistance, made three stops west of the church, where Ray Kelly, a parishioner of St. Peter Claver and director of the No Boundaries Coalition, described as many heinous acts of violence.

The first stop was on North Carey Street, where Antonio Addison, 22, was fatally shot in May. The second was outside New Song Worship and Arts Center on North Calhoun Street, where Addison’s funeral unraveled when his brother shot their father. Near the corner of Baker and Leslie, Kelly paused to tell of the July murder of Taymen Brown.

During the listening session, five speakers from as many parishes respectfully asked Archbishop Lori and the Catholic Church to advocate for them on a number of fronts, highlighting education and opportunity, including for ex-offenders, while noting the power of the church.

When the U.S. bishops’ initiative on peaceful communities was announced, Archbishop Lori sought the counsel of Bishop Madden, who has led more than 100 walks for peace since becoming an auxiliary bishop of Baltimore in 2005.

“I asked Bishop Madden, ‘should we have a big pontifical Mass, or a banquet?'” Archbishop Lori said, anticipating the response. “No, he said, ‘Let us do what we always do, walk, pray and remember what has to happen to work for a brighter future.'”

Trudy Scott, 55, a parishioner of the former St. Martin Church and now Transfiguration Catholic Community, where she does everything from lector to schedule hall rentals, is a veteran of many of those walks.

“We need peace in the streets, and the church’s presence may be the turning point,” Scott said during the Sept. 9 event. “We may get tired, but we can’t give up,” she told the Catholic Review, Baltimore’s archdiocesan news website and magazine.

Contributing to this story was Paul McMullen in Baltimore.