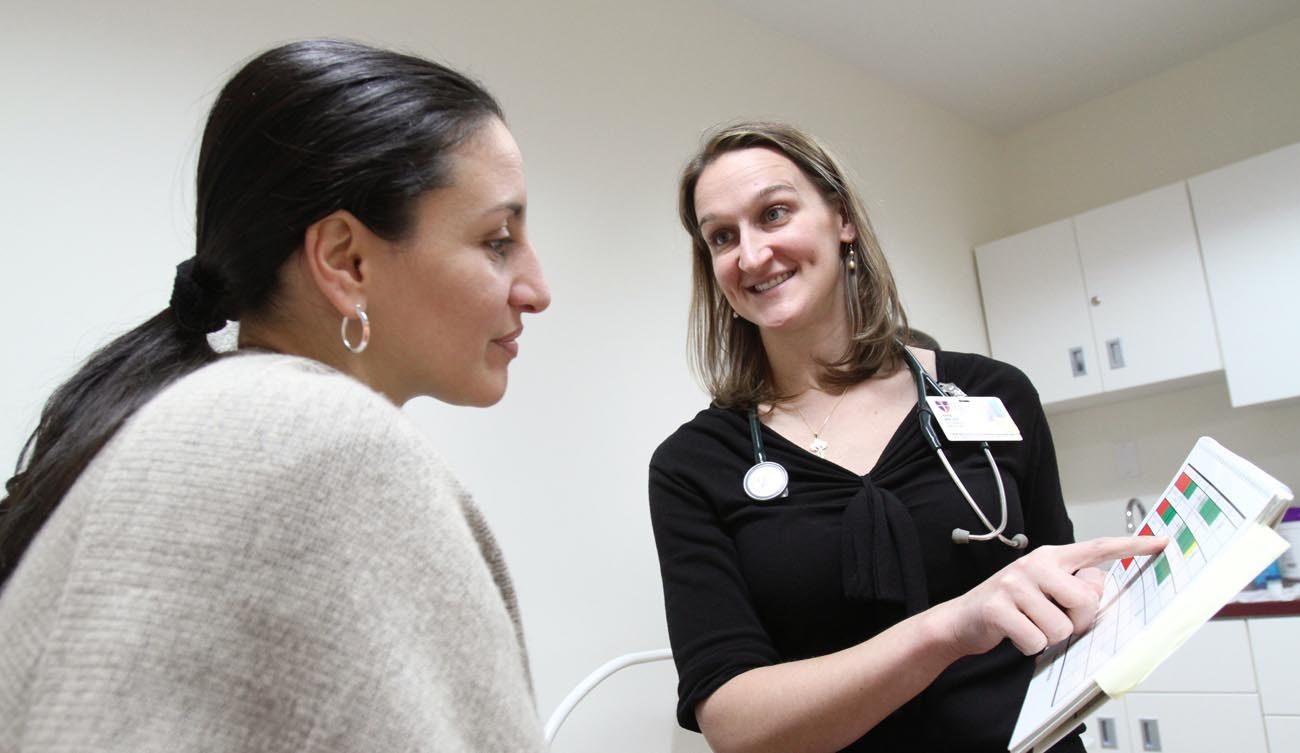 Dr. Anne Nolte, right, a family physician with the National Gianna Center for Women's Health and Fertility in New York, is pictured with a patient in 2009. A pair of Catholic physicians argue that changes in the way health care is paid for and stronger relationships between doctors and their patients will do more to improve people's health and uphold the sanctity of life than bureaucratic government-run programs and expensive insurance policies. (CNS photo/Gregory A. Shemitz)

WASHINGTON (CNS) — A pair of Catholic physicians argue that changes in the way health care is paid for and stronger relationships between doctors and their patients will do more to improve people’s health and uphold the sanctity of life than bureaucratic government-run programs and expensive insurance policies.

Dr. Marguerite Duane, adjunct associate professor of family medicine at Georgetown University, and Dr. Lester Ruppersberger, president of the Catholic Medical Association, also maintain that control over health care must be in the hands of patients and their families rather than any bureaucracy.

Both physicians offered their views during an hourlong discussion Nov. 2 in Washington sponsored by Christ Medicus Foundation at the Catholic Information Center called “The Changing Face of Health Care and the 2016 Election.”

The program took place just days ahead of the Nov. 8 election. Each of the four participants said that the next presidential administration and the new Congress will influence how the U.S. health care system evolves.

The panelists expressed concern over the erosion of conscience protections for hospitals and health care workers and the rights of individuals to choose a doctor who aligns with their religious beliefs and to purchase insurance without paying for health services that they morally oppose.

“People have to realize that Americans of all stripes, regardless of their religious affiliation, that we are losing our religious freedom … at amazing speed,” said Louis Brown, foundation director.

“We’re seeing with the increased power of the executive, of the White House and regulatory agencies that a lot of things can be done or undone without congressional action, and there’s a lot of danger,” Brown said.

He said the new Congress is expected to strengthen the Weldon Amendment, a federal law enacted in 2005 to protect the conscience rights of institutions and individuals, and to clarify some aspects of the Religious Freedom Restoration Act.

Then there’s the makeup of the U.S. Supreme Court.

Brown said observers expect at least three, and perhaps four, justices will be appointed by the next president and they likely will play a key role in health care services as lawsuits make their way through appeals.

The foundation-led discussion stemmed in part from its CURO health care ministry, a health sharing program that bills itself as an alternative to traditional health insurance. It enables people to pay for medical expenses without being part of an insurance plan they feel compromises their religious beliefs.

The panelists covered several topics, with the physicians expressing concern for increasingly restrictive regulations emerging from the Affordable Care Act that serve to marginalize the conscience of health care workers, Catholic hospitals and patients.

A fourth panelist, Matt Bowman, senior counsel at the Alliance Defending Freedom, outlined some of the lawsuits nationwide filed on discrimination grounds challenging the rights of hospitals and health care professionals to deny to offer care that violates their religious beliefs.

Citing her experience treating patients at the Spanish Catholic Center in the Archdiocese of Washington, Duane said she has learned that health care does not have to be expensive or guided by a checklist of actions in order to meet reimbursement guidelines or government mandates.

“Much of our health care costs does not actually pay for health care,” Duane told the forum. “It covers the administration of the bureaucracy that continues to build and expand and will only hasten and worsen with the Affordable Care Act. All of this money we are putting into this health care system is not helping people get healthier. It’s helping government to grow bigger. It’s helping government to have greater control in our lives and what we do.”

The ACA is facing new challenges after the Department of Health and Human Services announced in October that 2017 premiums for mid-level health plans will increase by an average of 25 percent and that consumers in some states will find fewer insurance companies offering coverage.

Duane called for greater use of direct primary care, an alternative care model in which a trusting relationship between patient and doctor is encouraged and fee-for-service incentives are replaced with a flat monthly fee. She said direct primary care leads to better outcomes because people feel connected to their doctor.

In cooperation with another physician, Duane has formed a direct primary care practice in which basic care is delivered at homes or elsewhere. She said the monthly cost is $79 for individuals and $250 for families.

The document, he explained, pointed to a “crisis” in the American health care that stems from the lack of health insurance coverage millions of Americans had in 2004 and continue to have today despite the ACA.

“The crisis in American health care is more than a crisis of the insured and uninsured,” Ruppersberger said. “It is a crisis afflicting the patient-physician relationship, which has been eroded by factors that include financing health care, but that are more properly understood as having their roots in the loss of a common understanding, within and without the medical profession, of the sanctity and inviolability of each human life and the dignity of the person.”

The Catholic Church, he continued, can provide the needed guidance to “enact meaningful health care policies that uphold the sanctity of life from conception to natural death, as well as the common good, and to do so in a financially sustainable fashion,” he said.

Acknowledging that the document must be updated to reflect changes in the health sector since then, Ruppersberger noted that any recommendations the Catholic Medical Association offers will conform with Catholic social and moral teaching.

“The challenge is to create new incentives that drive the power and responsibility for purchasing health insurance away from specific employers and government bureaucracies and toward the individual worker and family. Changes in public policy are needed to foster a renewed climate in which individuals and families are free to make decision about their health care and its source based upon conscience,” he said.

Bowman cited cases in which religiously affiliated medical facilities and physicians are defending their right not to refer a woman for an abortion elsewhere when the procedure is not offered at their own facilities. He also noted a Vermont case in which doctors are required to tell a terminally ill patient about all treatment options available, including physician-assisted suicide.

“This is a serious issue about whether health care professionals or health care facilities will be able to practice medicine consistent with their beliefs,” Bowman said of the lawsuits pending nationwide. “But it’s also an issue about whether their patients will be able to choose them. There are many women who want the freedom to choose a doctor to deliver their baby and their doctor also does not kill babies.”

NEXT: Bishops to concelebrate Mass at historic African-American Catholic church