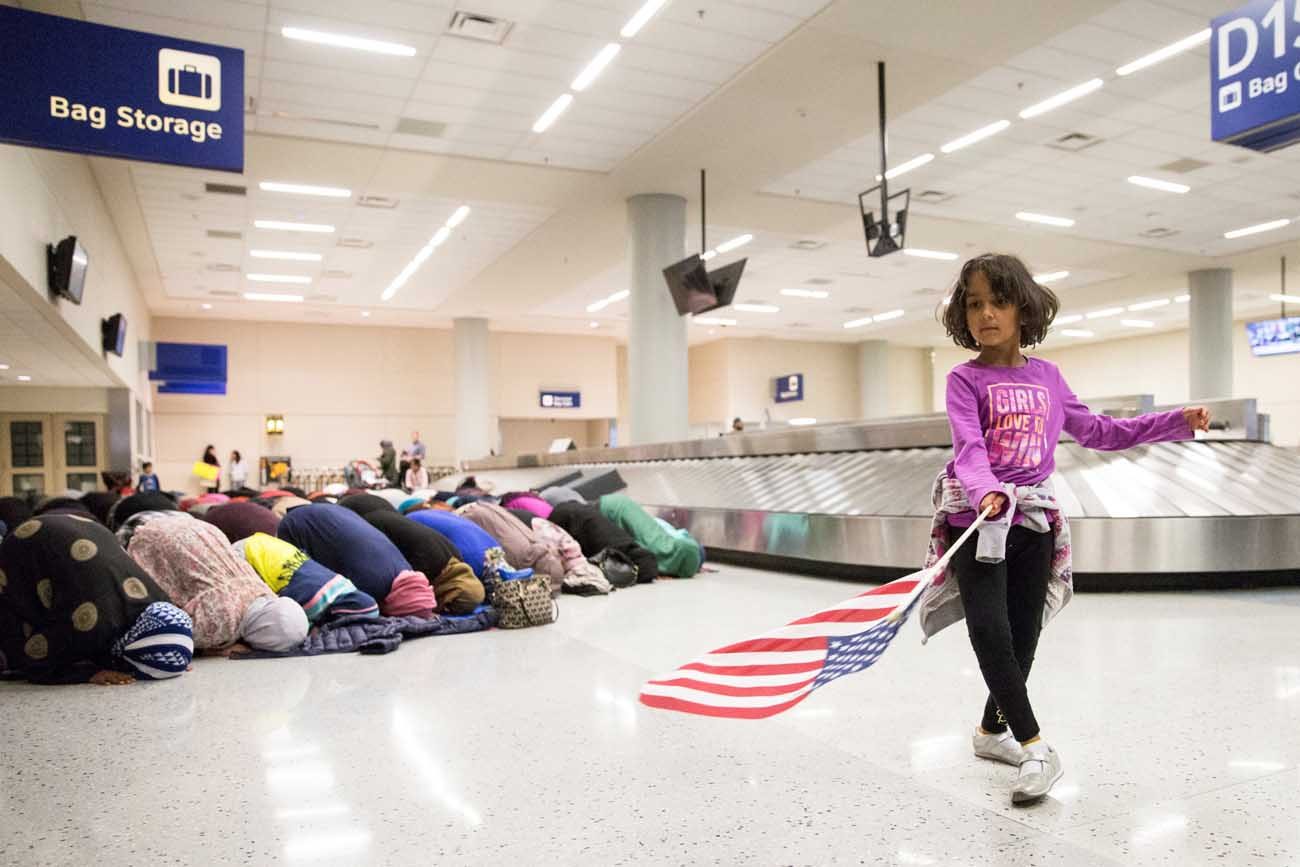 A young girl dances with an American flag at Dallas/Fort Worth International Airport in Dallas Jan. 29 as women pray during a protest against a travel ban imposed by U.S. President Donald Trump's executive action. (CNS photo/Laura Beckman, Reuters)

UPDATED – WASHINGTON (CNS) — As President Donald Trump signed an executive memorandum intended to restrict the entry of terrorists coming to the United States in the guise of refugees, the action brought quick response from Catholic and other religious leaders.

The largest response came from more than 2,000 religious leaders representing the Interfaith Immigration Coalition who objected to the action in a letter to the president and members of Congress. The heads of Catholic charitable agencies, organizations working with immigrants and Catholic education leaders also decried the president’s action.

The action also drew supporters, with organizations such as the Heritage Foundation and some church leaders saying it was necessary to protect the country’s security.

Trump signed the memorandum, titled “The Protection of the Nation From Foreign Terrorist Entry Into the United States,” during a Jan. 27 ceremony at the Pentagon’s Hall of Heroes as new Secretary of Defense James Mattis was sworn in. The president also signed a second executive action designed to build the strength of the U.S. military.

Regarding the refugee action, Trump said it was meant to keep “Islamic terrorists out of the United States. We don’t want ’em here. We want to make sure they don’t enter the country.” He added, “The only ones we want to admit into our country are those who will support our county and deeply love our people. We will never forget the lessons of 9/11.”

The memorandum suspends the entire U.S. refugee resettlement program for 120 days and bans entry of all citizens from seven majority-Muslim countries — Syria, Iraq, Iran, Sudan, Libya, Yemen and Somalia — for 90 days. It also establishes a religious criteria for refugees, proposing to give priority to religious minorities over others who may have equally compelling refugee claims.

The religious leaders’ letter said the U.S. has an “urgent moral responsibility to receive refugees and asylum seekers who are in dire need of safety.” The correspondence called on elected officials to “be bold in choosing moral, just policies that provide refuge for vulnerable individuals seeking protection.”

The leaders also insisted that the U.S. refugee resettlement program remain open to all nationalities and religions that face persecution. They decried “derogatory language” about Middle Eastern refugees and Muslims in particular, adding that refugees “are an asset to this country,” serving as “powerful ambassadors of the American dream and our nation’s founding principles of equal opportunity, religious freedom and liberty and justice for all.”

Among Catholics signing the letter were Bishop Frank J. Caggiano of Bridgeport, Connecticut; Jesuit Father Timothy P. Kesicki, president of the Jesuit Conference of Canada and the United States; Mercy Sister Patricia McDermott, president of the Sisters of Mercy of the Americas; and Sister Ellen Kelly, congregational leader of the Congregation of Our Lady of Charity of the Good Shepherd.

In an interview with Catholic News Service Jan. 30 from Geneva, Msgr. Robert J. Vitillo, secretary general of the International Catholic Migration Commission, recalled church teaching that holds “we should always welcome the stranger” just as “Jesus taught us by his example.”

Msgr. Vitillo called that work an “overwhelmingly positive” experience. He also recalled how much of America was settled by immigrants and built by their contribution.

“I hope the U.S. will stay faithful to that kind of response,” he added.

Archbishop William E. Lori of Baltimore called for prayer as the country responds to the series of immigration- related memorandum signed by the president since Jan. 20. He specifically cited the need for prayers for the nation’s leaders and “the people who call this country their home, including our immigrant sisters and brothers.”

“While we affirm the right of sovereign nations to control their borders, we likewise affirm our moral responsibility to respect every human being’s dignity. We must remember that those fleeing horrendous and unspeakable violence and grinding poverty have the right, as children of God, to provide for the basic needs of themselves and their families,” Archbishop Lori wrote in a Jan. 30 open letter to Catholics in the archdiocese.

Soon after Trump signed the memorandum, Rep. Paul Ryan, R-Wisconsin, who is Catholic, commended the action, saying “our number one responsibility is to protect the homeland.”

“We are a compassionate nation, and I support the refugee resettlement program, but it’s time to re-evaluate and strengthen the visa vetting process. President Trump is right to make sure we are doing everything possible to know exactly who is entering our country,” Ryan said.

Later in the evening, Dominican Sister Donna Markham, president and CEO of Catholic Charities USA, expressed concern for the change in U.S. policy.

“I am especially worried about the innocent children and mothers who have fled for their lives without support and are now caught in this regrettable and terribly frightening situation,” she said in a statement. “While I certainly appreciate the importance of vetting to ensure the safety of our country, I also believe we must treat those who are most vulnerable with compassion and mercy and with hearts willing to be opened wide in the face of dire human need.”

Officials with the Catholic Legal Immigration Network Inc. said the memorandum erodes the U.S. commitment to protect refugees, weakens national security and harms the country’s standing in the international community.

“Refugees have enriched our society in countless ways. These newcomers seek protection and the promise of equality, opportunity and liberty that has made our country thrive. When we reject refugees, we negate the welcome that was given to so many of our ancestors,” Bishop Kevin W. Vann of Orange, California, chairman of CLINIC’s board of directors.

Jeanne Atkinson, CLINIC executive director, added that the U.S must protect refugees rather than reject them because of misplaced fear, especially “when war and persecution have driven more people to flee in search of safety than any other time in modern history.”

Boston Cardinal Sean P. O’Malley, writing on his blog Jan. 27, raised the 40-year-long concern of the U.S. bishops of the need for comprehensive immigration reform. He wrote that the status of 11 million people who are in the U.S. without documents must be addressed with compassion and with respect for the country’s laws.

“The Catholic voice in the immigration debate calls for reform based on reason, compassion and mercy for those fleeing violence and persecution,” the blog post said. “At a pastoral level, in our country and in the Archdiocese of Boston, the church must be a community which provides pastoral care, legal advice and social services to refugees and immigrants, as we have done in this archdiocese for more than one hundred years. We will continue this important work through our parishes, Catholic Charities and our Catholic schools.

“Our country has the opportunity to respond to the reality of immigration with policies and practices which reflect our deepest religious and social principles. Together let us make the commitment to be a beacon of light and hope for those who look to us in their time of need,” Cardinal O’Malley said.

Archbishop Allen H. Vigneron of Detroit sent a letter Jan. 28 to the Imam’s Council of the Michigan Muslim Community Council to express his support for migrants and refugees of all faiths and countries of origin.

The letter, he wrote, reaffirms his “solidarity” with the statement from the U.S. Conference of Catholic Bishops opposing Trump’s executive memorandum.

“Please know that the Catholic community will continue to speak out and care for immigrants and refugees, no matter their religion or their country of origin,” the letter said.

Holy Cross Father John I. Jenkins, president of the University of Notre Dame, called on Trump to rescind his action because it “halts the work of valued students and colleagues who have already passed a rigorous, post-9/11 review process, are vouched for by the university and have contributed so much to our campuses.”

If the new policy stands, “it will over time diminish the scope and strength of the educational and research efforts of American universities, which have been the source not only of intellectual discovery but of economic innovation for the United States and international understanding for our world,” Father Jenkins said in a statement. “And, above all, it will demean our nation, whose true greatness has been its guiding ideals of fairness, welcome to immigrants, compassion for refugees, respect for religious faith and the courageous refusal to compromise its principles in the face of threats.”

“I join with my brother bishops in the effort to work vigorously to ensure that refugees are humanely welcomed without sacrificing our security or our core values as Americans,” said Bishop Peter J. Jugis of Charlotte, North Carolina. He noted with disappointment two refugee families scheduled to arrive in Charlotte the week of Jan. 30 have been turned away.

The Association of Catholic Colleges and Universities Jan. 29 voiced “strong opposition” to the president’s immigration policy. “We stand in solidarity with other Catholic and higher education organizations that recognize the moral obligation of our country to assist migrants, particularly those who are fleeing any kind of persecution,” the organization said.

Philippe Nassif, who is executive director of In Defense of Christians, a Washington-based advocacy group supporting minority religious groups in Middle East countries, called for a quick end to the ban and said it would be better to focus on creating safe zones for Christians in the Middle East.

“It is important to understand,” he said, “that Christians, Yezidis and other religious minorities in Iraq and Syria have been victims of genocide perpetrated by ISIS,” which, he noted, has been “formally recognized by the U.S. Congress.”

“It is our belief at IDC that these genocide victims who seek asylum should be prioritized and given accommodation on the basis of this status. But that does not mean banning all refugees,” Nassif said.

The International Organization for Migration and the U.N. High Commissioner for Refugees Jan. 28 urged the U.S. to continue its leading role in resettling refugees, especially in a time when the needs of migrating people have never been greater.

“We strongly believe that refugees should receive equal treatment for protection and assistance, and opportunities for resettlement, regardless of their religion, nationality or race,” the agencies said in a joint statement.

Members of Congress lined up primarily along political lines, with Democrats opposing the measures and most Republicans supporting them. About 20 Republicans voiced reservations about portions of the action, with some describing its potential to inspire terrorists overseas and its need to have been vetted more widely before implementation.