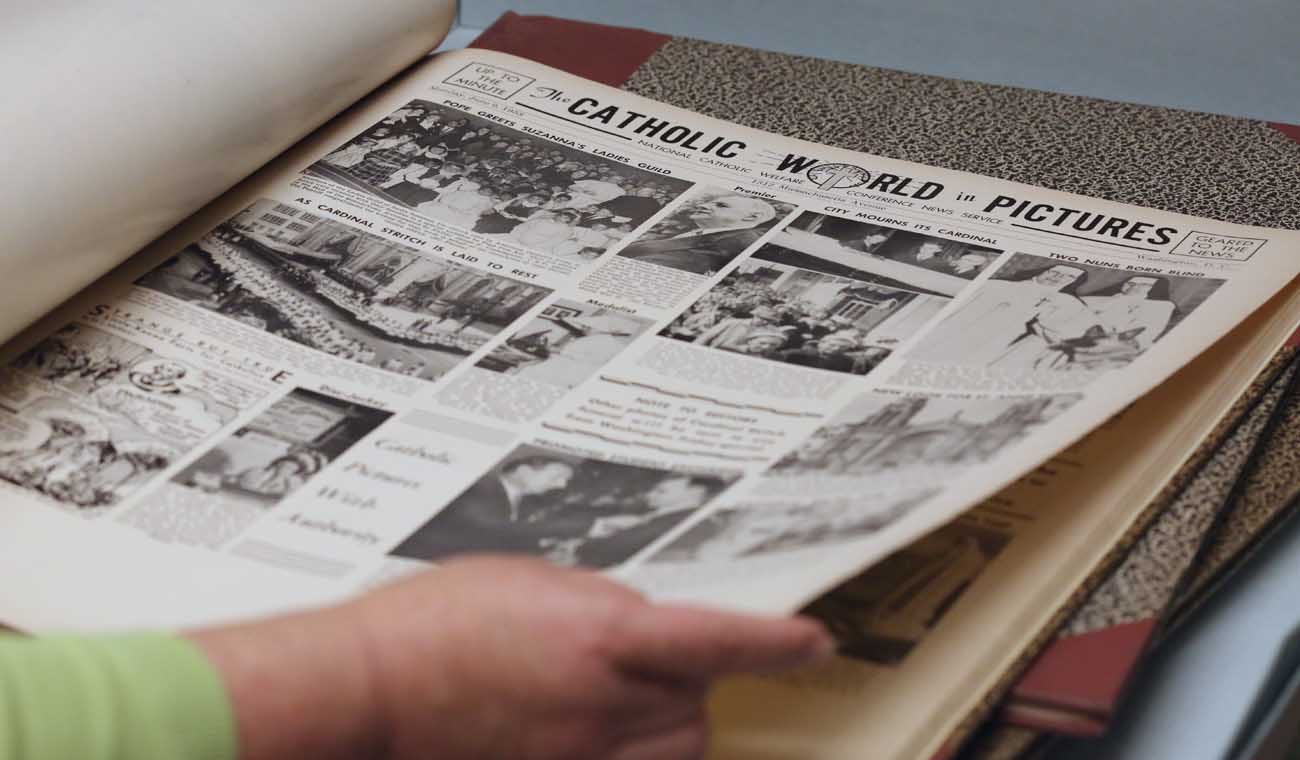 This is a page from the National Catholic Welfare Conference news service title "Catholic World in Pictures" that is being digitized by the Catholic Research Resources Alliance. The NCWC service was the precursor of Catholic News Service. (CNS photo/Bob Roller)

WASHINGTON (CNS) — Only pack rats would save copies of old newspapers. Or so you would think.

But a consortium of librarians and archivists are preserving Catholic news from the last century.

As newspapers age, their pages get more brittle and fragile. And outdated technologies such as microfilm and microfiche keep those newspapers from being readily accessible unless you live near a big downtown library or a university that still has the machines needed to read that data.

Many Catholic newspapers, unlike their secular daily brethren, were not kept, maintained and preserved with the same level of passion, save for some diocesan archives.

To correct this situation, the Catholic Research Resources Alliance has undertaken a project to digitize nearly a dozen of the United States’ top Catholic newspapers of regional and national importance — the print runs of which, for some of them, go back for more than a century.

“Creating a Catholic news archive and digital aggregation for Catholic newspapers is something that scholars are very interested in,” said Jennifer Younger, executive director of the alliance, known as CRRA.

“We mark the beginning (of the project) in 2011, when we brought together a newspaper committee: ‘If we’re going to digitize something, what would be most useful?’ Newspapers rose right to the top. Which newspapers? We had to figure out which newspapers existed, which ones were being held (by libraries), which ones weren’t being held,” she told Catholic News Service.

The committee came up with a list of more than 800 Catholic publications from the United States alone, and another 200-plus in Canada. 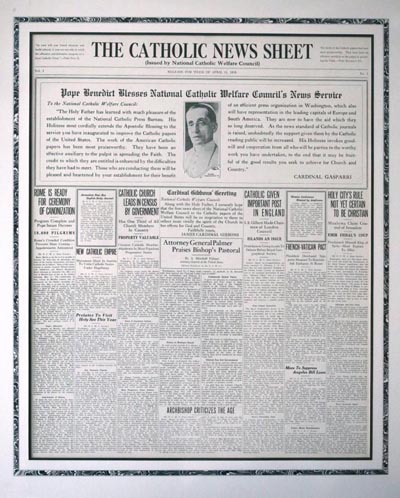 This is a copy of the April 11, 1920, issue of The Catholic News Sheet, produced by the National Catholic Welfare Council new service, the precursor to Catholic News Service. (CNS)

A 12th newspaper recently added to the list is the Catholic Worker, which since its founding in the 1930s is still a penny a copy, as the front-page banner says.

The digitized material will be made freely available through the CRRA-developed Catholic News Archive.

News of the project was cheered by archivists in Philadelphia.

“The digitization of the Catholic Standard and Times is a huge leap forward for the entire Philadelphia community as well as anyone interested in the history of the U.S. and the church,” said Cait Kokolus, vice president for information services and assessment at St. Charles Borromeo Seminary in Wynnewood.

Kokolus and her team at the seminary also are completing a project to digitize all the Philadelphia Archdiocese’s baptismal and marriage registers.

“Folks will easily be able to find where their grandmother was baptized or who their Great Uncle Jerry married,” she said. “I see this as a real gift to the local Catholic community.”

Digitization is the new normal, according to Tim Meagher, an associate professor of history at The Catholic University of America, Washington, and an archivist who runs the Center for American Catholic History.

“Everything is, as much as possible, going into digital format,” Meagher said. “In some ways, even if the paper exists in print, its use will be less if it is not digitized.”

Some of the largest U.S. dailies, including the New York Times, Washington Post and Chicago Tribune, have been digitized, he said. “It’s a tremendous asset,” Meagher added. “Suddenly you’re on the radar screen, easy to access, easy to get to.”

“We have set very high standards. When we do our digitization, we never have to do it again,” said Patricia Lawton, CRRA’s director of digital initiatives. “We’re getting the best imaging we possibly can. Microfilm or print, you want a good image. That is the basis of everything that you’re going to do,” allowing the user to employ more robust search capabilities. “We based all our research on the Library of Congress (standards) and even upped the standards a bit,” Lawton noted.

Archivists also are working with those libraries and diocesan archives holding newspaper collections to preserve them, and to provide multiple backups for the digital information being created.

In digitizing a century’s worth of Marquette’s student newspaper, Marquette opted to do the work itself rather than contract it out — which could be cheaper but take longer to do, without the kind of quality control one may want. Marquette also chose overhead scanning to gain a better image, and has utilized students to compare the original newspaper with the digitized image to make sure there are no glitches.

A grant from the U.S. Conference of Catholic Bishops’ Catholic Communication Campaign has allowed CRRA to digitize the NCWC/CNS archives from 1920 to 1952, but Cary estimated the cost of digitization at more than a dollar per page. Doing roughly a century’s worth of 10 weekly newspapers and one monthly comes to a lot of pages. A GoFundMe project was established in December to raise $25,000 to digitize the NCWC/CNS “Catholic World in Pictures” print run: www.gofundme.com/hb-catholic-world-in-pictures.

For CRRA’s Catholic newspapers project, the top priorities are the years prior to 1923, when material is in the public domain, and the years before, during and following the Second Vatican Council, to track the difference in how the church engaged with the world — and with itself — that may have manifested itself in the pages of the newspaper.

NEXT: Advocates stress that U.S. has moral obligation to welcome refugees